Near the midpoint of Kasia Van Shaik’s collection of intertwined short stories, the protagonist muses, “It had not been a good idea to return here, to a place where I had once been happy. It is never a good idea to return to such places.” Yet, over and over, these stories engage with return, or a desire for return: to a time or to a place, and to the moments that have been formative in shaping a woman’s identity. Themes of geography, movement, departure, and renewal animate We Have Never Lived on Earth, weaving a narrative cohesiveness that balances the contrast between stories set at various times and in various places.

The collection follows the life of Charlotte Ferrier, through her early childhood in South Africa, her immigration to Canada, and her adolescence in the small town of Whale Mountain, British Columbia. Charlotte longs for broader horizons and artistic pursuits, eventually pursuing ambitions that take her to Montreal, Berlin, Crete, Amsterdam, and Italy. Some of the stories also branch out to focus on secondary characters in Charlotte’s periphery, including her parents, sister, childhood friends, and eventual lovers. The handling of these intersecting storylines is deft, but the returning focus to Charlotte at different junctures in her life is in large part what makes the collection feel purposeful, and at times even suspenseful. 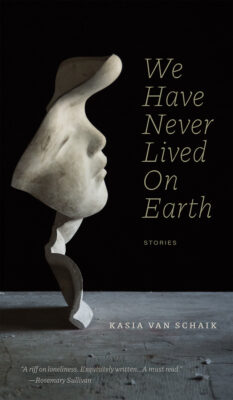 We Have Never Lived On Earth
Kasia Van Schaik

As a child and teenager, Charlotte navigates her experiences as an immigrant, the daughter of separated parents, and someone self-conscious and reflective enough to observe the precarious expectations of femininity. An early encounter with a boy leaves her wondering, “I wondered if I had gone too far, or not far enough. What was the right amount?” Growing older, Charlotte becomes more adept at reading the world around her, but rarely more confident about her place within it. Some of the most strikingly resonant moments appear in the stories depicting Charlotte in her thirties, at a time when “We are still young, but no longer very young. We are nearly young.” The arc of the stories comes full circle towards the end of the collection, as Charlotte wrestles with her relationship to her mother and with the decision whether or not to become a mother herself. Her mental health, her attempts at forging an artistic identity, and the looming threat of ecological catastrophe also add nuance to the choices Charlotte grapples with. As a narrator, she is incisive and compelling; as a character, she is appealingly vulnerable.

The collection manages to be both dense and sparsely elegant; Charlotte is an avid reader, scholar, and critic whose striving to understand her place in the world is paralleled by an extended intellectual project on women artists. The stories are studded with allusions to writers ranging from Samuel Beckett to Aristophanes, and the deft and subtle handling of these references is one of the strengths of Van  Schaik’s stories. The writing is intellectually rich without being obtrusive, and often warm and poignant, sometimes highlighting moments that hover between comedy and pathos. In a later story, Charlotte’s partner mentions marriage, and she wryly observes, “He brings this topic up occasionally when he’s feeling depressed or dehydrated. I hand him my water bottle.”

We Have Never Lived on Earth is bold in the questions it asks, and the scope of the narrative it conveys, but in the tradition of the best short stories, it is the small, precisely rendered moments that make it resonant, familiar, and refreshing. mRb