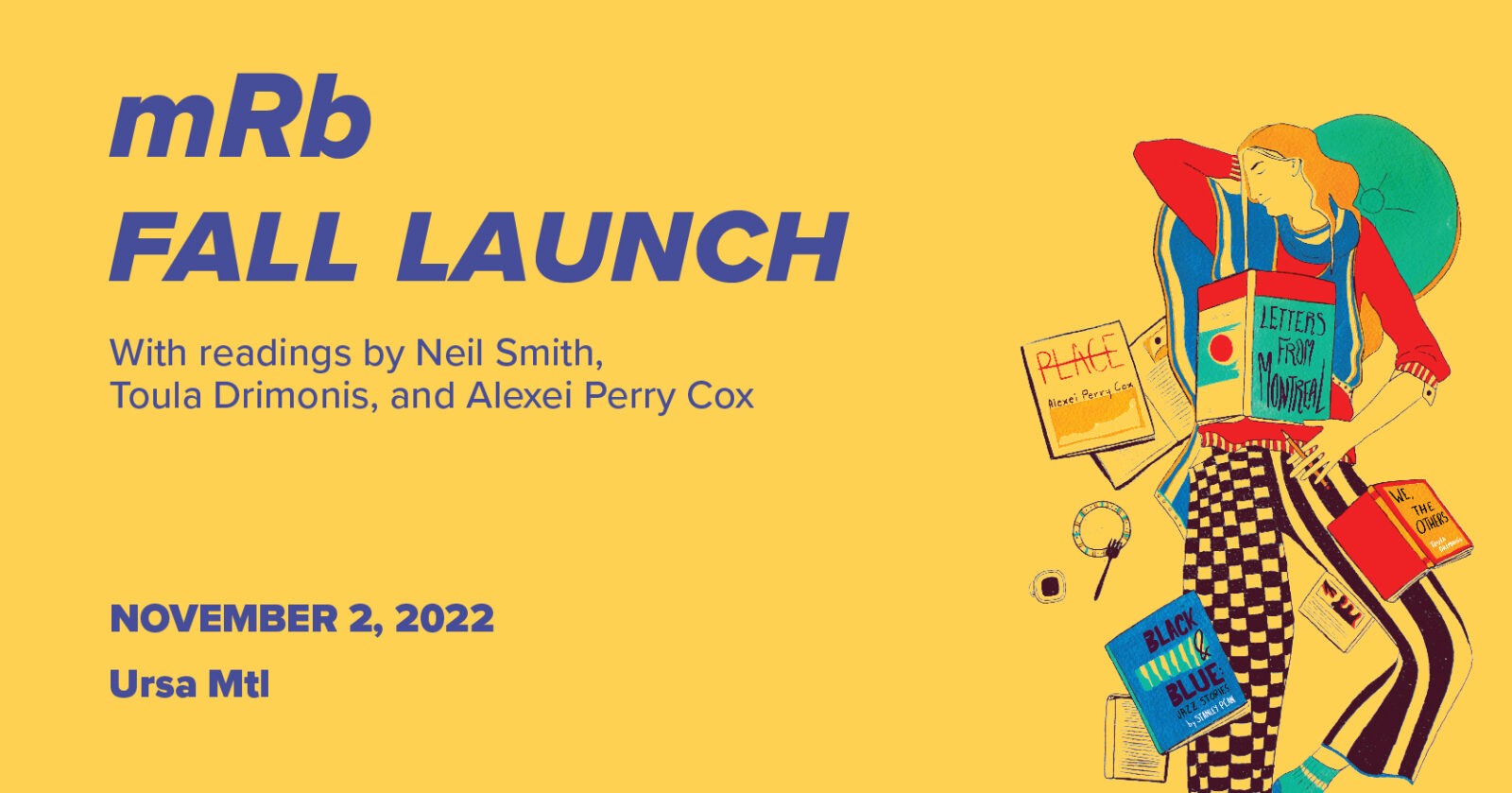 As part of the AELAQ Holiday Book Fair, the 25th anniversary celebration of Montreal Review of Books continues, with the launch of its Fall 2022 Issue on Wednesday, November 2 at Ursa (5589 av. du Parc)! Join us for readings by featured authors Toula Drimonis (whose new memoir, We, the Others, is out from Linda Leith Publishing), Neil Smith (whose novel, Jones, is out from Penguin Random House) and Alexei Perry Cox (whose poetry collection, PLACE, is out from Noemi Press).

Doors open at 6:30 p.m., with readings at 7 p.m, and a discussion to follow moderated by mRb editor Malcolm Fraser. The authors will stick around to sign books after the readings, with food and drinks available for purchase at the venue. Admission is free. Please note that Ursa is located at the bottom of a short flight of stairs.

For those unable to attend in person, the event will be live-streamed and uploaded to the AELAQ YouTube channel. As with all our book fair events and in accordance with public health guidelines, mask wearing is optional, though encouraged.

Toula Drimonis is a Montreal-based opinion columnist, writer and news producer. A former news director for TC Media, she has reported and written on politics, social justice, and women’s issues for national and international publications. She has worked in television, radio, and print in all three of her languages, and has appeared on TV as both panelist and contributor to English and French-language current-affairs and cultural news shows.

Neil Smith is a Canadian writer and translator. His novel Boo, published in 2015, won the Hugh MacLennan Prize for Fiction. Smith published his debut book, the short story collection Bang Crunch, in 2007. It was chosen as a best book of the year by the Washington Post and the Globe and Mail, and won the McAuslan First Book Prize from the Quebec Writers’ Federation. Smith also works as a translator, from French to English.

Alexei Perry Cox is a writer and teacher and organizer. She is the author of Night 3 | اليوم الرابع (Centre for Expanded Poetics), Re:Evolution (Gap Riot Press), Finding Places to Make Places (Vallum), as well as the full length collection Under Her (Insomniac Press). PLACE is now out from Noemi Press. Her poetry and criticism has graced the pages of a wide variety of publications, including  Journal Safar (جورنال سفر), Arc Poetry Magazine, Moko Magazine, Carte Blanche and The Georgia Review. At the core of her makings is the belief that we imagine relationally, sometimes with words and sometimes with graze.