Songs Upon the Rivers

A review of Songs Upon the Rivers by Robert Foxcurran, Michel Bouchard, and Sébastien Malette

In Songs Upon the Rivers, Robert Foxcurran, Michel Bouchard, and Sébastien Malette reframe the American West from a perspective focused on the contributions of French colonizers and their descendants. Instead of repeating Anglo-centric chronicles underplaying the legacies of French America during critical moments in US history, the authors propose a new narrative emphasizing the unity of the French fact throughout North America. The authors blend Canadien (French-Canadian, or people of French descent born in North America) and Métis (a legally recognized post-contact Indigenous nation of Western Canada), arguing, “the concept of métissage is, in our opinion, incorporated in the ethnonym Canadien.” This book asks for a “wider usage of the term ‘Métis’” expanding the geographic scope of its use across North America.

This is a controversial position rejected by many Métis people in Canada and by most scholars of North American Indigenous history. The French language uses métis and métissage to describe the “mixing” of racial categories via sexual intercourse. Métissage therefore continues today the same way it appeared in the archival documents cited by the authors and is a by-product of an upheld societal belief in the concept of race. But métissage does not make one Métis, or a member of the Métis Nation, which is a specific historical Indigenous polity defined in the nineteenth century. Even if New France was not as “pure laine” as Lionel Groulx argued, unions between French men and Indigenous women in the early colony did not create a widespread culture of people that maintained kinship ties and treaty obligations towards their Indigenous relatives throughout North America. One can argue for the significance of the Canadiens to the history of the continent without insisting on the indigenization of that identity. 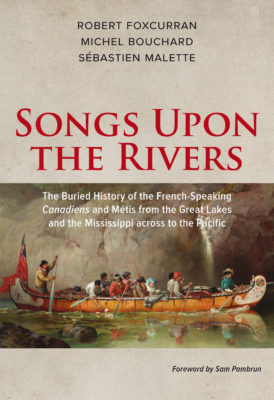 Songs Upon the Rivers
The Buried History of the French-Speaking Canadiens and Métis from the Great Lakes and the Mississippi across to the Pacific
Robert Foxcurran, Michel Bouchard, and Sébastien Malette

The authors criticize prevailing scholarly research, but their own methods do not stand up to scrutiny. Oral histories supporting a revision of Métis and Canadien labels are mentioned but not incorporated into the analysis. And a number of specific historical jumps and jabs raised eyebrows and pointed to a broader pattern of omissions and selective readings. For instance, skipping over the statehood histories of the Minnesota and Dakota territories (both of which involved the Métis Nation, big time!), is unusual in a book that purports to be about the French and Métis in western North America. The authors also criticize the record keeping of Joseph Kinsey Howard, an early twentieth-century historian of the Métis, erroneously suggesting one of Howard’s important primary sources is “unknown.” (The source is “The French Half-Breeds of the Northwest,” by V. Havard, published by the United States Senate in 1880.) Omissions and errors such as these allow the authors to sideline historical understandings of post-contact Métis communities in North America as a distinct polity alongside other diverse Indigenous nations.

Errors also appear at the level of basic facts. For example, students and speakers of Anishinaabemowin, the language of the Anishinaabeg (baptized Ojibwa, Saulteux, and Chippewa by settlers) will cringe to see their greeting, boo-zhoo, described as an “Algonquinized French term.” It is well known that the word’s origins are rooted in Anishinaabe history, not French. Here and elsewhere, this book whitewashes Indigenous cultures, languages, and politics.

It also undermines Indigenous sovereignty and laws, such as when the authors write: “Canadiens continued to move west into the Pays d’en Haut which was still de facto ‘their West.’” Such descriptive language paints the American West as an empty French colonial space and implies the French and their descendants moved into unoccupied lands. The result is essentially a French version of American Manifest Destiny, the belief that God’s will made the American expansion of the United States possible and legitimate, through violence and the legalized oppression of Indigenous peoples.

While this book engages readers in an important and timely conversation about the legacies of French colonialism in North America, its unorthodox methods and questionable historical approach should leave readers with more questions than answers.

Émilie Pigeon is wrapping up a doctorate in Métis Catholic history at York University. Although a Canayenne settler whose family came to North America in the 1660s, she is not Métis.