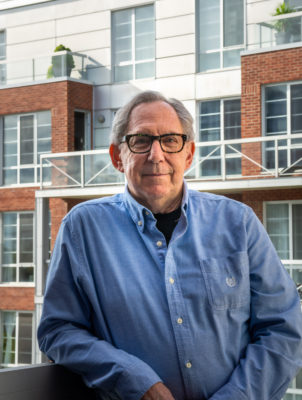 The first time I heard of Richard King was when I was hired as Events Coordinator at Paragraph Bookstore in the spring of 2008. My new employer gave me a speech about how the business was founded in 1981 by Richard King and Jonathan Penney, neither of whom still worked there.

Richard would come by the store on occasion. When we had a chance to chat, I found that behind his unassuming demeanour was an immeasurable knowledge of writing and the book trade. I soon learned that the current thriving English-language literary scene in Montreal would not be what it is without his lifelong efforts. King played an important role in the founding of QSPELL (the predecessor of the QWF), was involved with several literary and educational associations, and volunteered at the Jewish General Hospital.

I could go on about times I sought out his wise counsel or occasions when he offered avuncular guidance, but instead I will share several short anecdotes that exemplify the man I knew.

I was working on a Saturday evening when a customer came in asking for a book she had heard Richard speak highly of on his most recent radio broadcast. I had missed the show that week, so I decided to phone him at home and ask. When I looked up his phone number on the store’s database, there was a note saying “okay to give his number to anyone who asks,” which I found interesting. Most people prefer not to be bothered.

Richard, seeing the store’s number on the caller I.D., answered with an excited “Hello, Peter!” assuming I was the store’s director, Peter Mandelos.

His enthusiasm did not wane in the slightest when he asked what he could do for me. I said someone wanted a book he recommended on CBC Radio. He listed three titles, and I was able to find the one the now well-pleased customer desired. Richard then said that I had not disturbed him at all and I could call him anytime.

A few years later I was putting together the Books & Breakfast series for the autumn. When we were having trouble booking a host, Peter suggested I try Richard, who was more than happy to oblige. I was glad he accepted, but it made me a little uneasy: Books & Breakfast was a Richard King original creation. He started it in the early ’90s as a means of attracting marquee English-language writers to Montreal, a city often overlooked on book tours. Richard had told me that for the first B&B he could not give tickets away, but he persisted and eventually the event drew crowds of 300-500 people. Essentially, I was about to put on a production of Hamlet with William Shakespeare in the audience.

The morning went without serious incident, and afterwards Richard sought me out to shake my hand.

“You did a good job,” he said with a quick, warm grin.

Now, B&B is not a one-man show: it is the culmination of the hard work of Paragraph employees, hotel staffers, publishing companies, and sponsors.

“I know,” he injected, eyes lighting up through his thick spectacles, “and you did a good job.”

When I signed a publishing deal in 2018, I was looking for writers to give me blurbs for the back cover. A few were willing, but I needed more. It was Peter who suggested I try Richard. Mensch that he was, he immediately agreed to do it, and after reading a draft of my book, he gave me a few suggestions, mainly to cut one part and add more to a particular chapter, which I did.

When my book was released, I was prepared to gift him one of the copies from the publisher, but he insisted on buying one and having me sign it for him. He re-read the volume, never gloating that I had heeded his advice, and promptly promoted the book on his CBC radio broadcasts, spoke well of it when he appeared on TV, and even interviewed me for a podcast he was developing.

Last December, Richard telephoned the store to order a book, and I am grateful that I took the call. Knowing he was ailing, I thanked him for everything he had done for me. Of course, he was his usual modest and humble self: he wished me well for the holidays, and the best for my writing career. Then he thanked me for selling his latest books at the store. He thanked me!

As long as I live I will never forget that.

Andreas Kessaris is the Events Coordinator at Librairie Paragraphe Bookstore and the author of the book The Butcher of Park Ex and Other Semi-Truthful Tales. He currently lives in Montreal.