100 Questions about Women and Politics

Canadian women couldn’t vote until after World War I. They weren’t eligible to run for office until 1929. Stale news? Sure, but Justin Trudeau’s gender-parity cabinet still generated reams of gobsmacked headlines a mere three years ago. The gist, here, is that the road toward equality in government has been a long and winding one, in Canada as elsewhere.

Manon Tremblay’s 100 Questions About Women and Politics digs into why achieving a balanced representation of men and women has been so difficult. The title is literal: the volume is framed as a hundred questions, followed by mini-essay responses that parse women’s participation in global government, as citizens and as officials.

This format offers Tremblay breadth, letting her explore women’s participation in the political process as voters, candidates, legislators, cabinet members, and national leaders. She considers the systemic factors that impact candidacy, such as party structures, public bias, and the media, looking at these alongside strategies for stimulating equality like quotas and parity mandates. She also attends to how women function within government once elected, pointing toward a tendency for them to be given “pink portfolios” in education or family services with smaller budgets and less cachet than more “masculine” briefs like finance or defence. 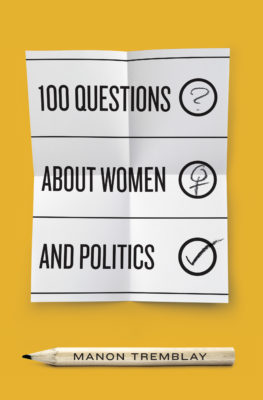 Tremblay is a political science professor at the University of Ottawa who’s published a litany of books and edited volumes in both French and English covering Canadian politics, representation, women’s rights, and sexual diversity. This collection is more an adaptation than a translation of Tremblay’s 2008 100 questions sur les femmes et la politique. For the English version, she expanded her reach beyond Quebec and Francophonie to consider the global political arena, while keeping Canadian politics at the forefront.

Many of the questions she asks seem simple (“Is the media sexist?”), but her responses unpack more complex debates, such as whether women are better supported by feminist men or non-feminist female representation. This structure functions well to complicate her subject by showing how women’s political participation is always enmeshed in other systems – socio-economic status, ideology, access to education and funding, competing identity markers, cultural perceptions, family obligations, and so on.

Tremblay is keenly interested in other issues of representation where womanhood intersects with sexuality, gender identification, race, ability, and class. She is careful to address the ways in which womanhood can be complicated by multiple identities, for example in an excellent chapter comparing Canadian indigenous women’s role in tribal councils and the provincial or federal government, but she doesn’t let them steer her off-topic.

The modular essays and comprehensive research make this a valuable reference book for teachers and journalists, although it’s hard to imagine many people reading it cover-to-cover unless they have a specific, probably professional reason to do so. Each Q&A is self-contained with its own reference pages, making this a boon for those in the business of assembling course packs or writing term papers.

While 100 Questions is a book about women in politics, Tremblay uses it as a tool to poke at the idea of representation more broadly. By asking and answering questions about equality and government, she compels her reader to think about what a democracy is, how we should define fairness in representation, who can stand for “our” issues (as members of whatever groups we might individually belong to), and what we owe others.

Tremblay’s command of her subject is authoritative, clearly outlined and argued using examples drawn from around the world. And while 100 Questions focuses on women, her attention to other issues of representation makes this volume a valuable asset for anyone seeking better strategies for being heard and seen by their government. mRb