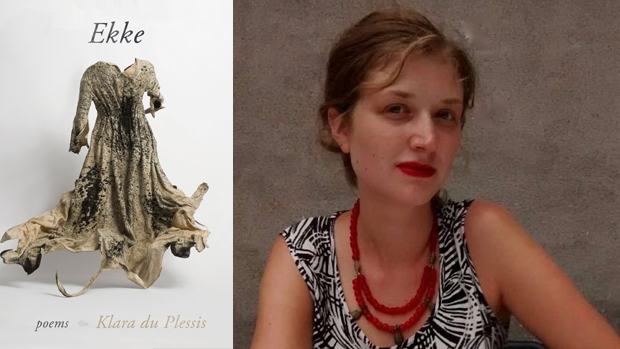 Eking Out an (Un)Common Language

“Ek” translates to “I” in Afrikaans. “Ekke” is an emphatic utterance, a (re)affirmation manifesting in the word’s visual mirroring of “ek.” It’s a move similar to the French moi, je, and familiar to me in its proximity to the colloquial “me, I” phrasing of Italian-Montrealers. It’s also a proclamation: “I am an emphasis of myself,” the title poem in Klara du Plessis’s book Ekke asserts. It coexists in both ear and eye with several English words, too: the humble and toiling “eke,” for example, and the pleasurably fitting “ekphrastic.” Both impulses ripple throughout du Plessis’s highly original debut collection.

The eight long poems in Ekke have breadth and a sharp, essayistic curiosity. They’re aesthetically slippery, translating what we might traditionally understand as confessional, lyric, and L=A=N=G=U=A=G=E poetry into something new and yet strangely familiar. Ekke enacts a multiplicity of the self (as citizen, body, object, imagination, “I,” etc.) as it coexists with sound, language, translation, and art. The amended philosophical mantra that comes to mind is: “I exist, therefore I coexist.” Coexistence, for du Plessis, is a kind of vitality that extends far beyond mutual tolerance. It’s fertile with possibility, and when it comes to language, the coexistence of Afrikaans with English in her writing “embodies a personal form of linguistic honesty,” as du Plessis, who grew up in South Africa and now lives in Montreal, states in her author bio. 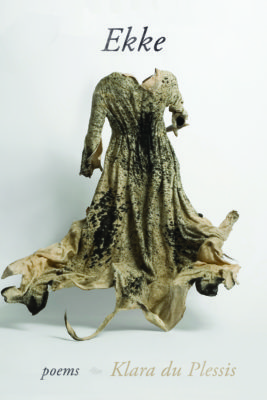 On the idea of linguistic honesty, a compelling counterpoint is presented in the poem “Someone other than else”: “Words are sounds that sometimes pretend to have meaning.” Though abroad at an artist residency in Spain, du Plessis was generous enough to tell me more over email. “It’s probably a poetic statement on the arbitrary nature of language,” she says of the line, “especially within a context of breaking open and unfolding words (pushing ‘ekke’ to ‘eke,’ for example).” To du Plessis, being multilingual means her mind “isn’t ever unilingual, it slips constantly between languages […] it can become claustrophobic to limit oneself to only one set of vocabulary.” As the speaker of one poem tells us, “my language / is a secret / secretion,” a discharge that creates a private but pleasurable friction.

Word
is to become
word is woord
which is not a word in English.

“Word” translates to “becoming” in Afrikaans, and “woord” to “word.” Her poems contain words in Afrikaans (as well as a few instances of French, German, and Spanish), and du Plessis supplies readers with straightforward translations at the end of the book. I wondered about the potential problem of acting both as poet and translator. “I decided on the most basic solution, which was offering literal translations,” du Plessis tells me. “The endnotes don’t try to be poetic. Which is actually a strange decision for a poet to make – the part that most readers will understand isn’t the pleasing one.” She likened the diminishment to “explaining a joke.”

Though the translations are helpful as bits of information, reading Ekke without the accompanying endnotes can be a productive puzzlement that adds an additional layer to the reading experience. There’s something kinetic about du Plessis’s writing; even at its most ekphrastic or ornamental, it’s alive – reading it is like feeling intensely watched by a portrait, or seeing a grape roll across the table in a still-life painting. Her words transcend skryftaal (written language) and in their lingual mobility expresslyftaal (body language), too:

I speak languages.
Lyftaal
Skryftaal
Statuary marble
constructing my mouth and biting words out in frieze.

Despite the book’s various tactics and tongues, it has a cumulative quality that creates structure and maintains an internal logic. One of my favourite lines in the collection, found in “Conveyer Belt,” a poem that starts with the Afrikaans word “beste” (cattle) and moves to “blessing” and the French word “blessure”(wound), is a warning: “If you manhandle language, like other things, it cowers.” Conversely, each piece of each poem is lovingly laid together by du Plessis in an act of avant-garde masonry. Though she tells me she’s interested in the project of writing “without the spatial constraint of a typical lyric poem,” her work is always in conversation with the forms that it challenges and at ease in a new space entirely.

Also fitting is how the book begins with stones. The title of the opening poem, “First of all we no longer write in black,” centres race as it pertains to the identity and imagination of post-apartheid South Africa. On one level the poem depicts the practice of writing out place names in white painted stones, literally embedding language into the landscape. On another level, in du Plessis’s own words, “the poem references a heavy-handed inscription of colonial entitlement.” The stones are described as “whitewashed” and “estranged in new names,” projected into the “identity politics of place.” Rather than a political tract, the poem acts as “luxuriating ululations in the throat.”

“Stillframe Inbox,” an ekphrastic poem based on a work of art by Dorothea Vermeulen, continues with stones – now they’re
in a box, stripped of their previous significance, “a collection of chunks / that just happen to be present and emotionally available.” The stones are a pastime, the girlhood activity of rock painting. They are then scattered haphazardly “under the bridge by the railway tracks.” Further examples of the collection’s cumulative qualities are the way poems comment on their own construction. Here, the speaker in “Stillframe Inbox” tells us about her process:

…………………………………………..while writing
the previous poem months ago I considered alluding
to my friend’s street art stone project but ultimately didn’t—
weaning myself from beloved topics
is one of my unsuccessful attempts at discarding
what I think I write and then writing exactly the same stuff.

It’s impossible to shed the political implications of the previous poem, and the speaker tells us:

these days I’ve been framing all my art in white.

She always had better responses to politics than me
and it’s too bad that I can’t remember these.

Another of du Plessis’s beloved topics is museums, and readers are taken to several throughout the collection. Yet du Plessis aims for pliancy; she stretches and softens the boundaries of the institutional art gallery space to open up possibilities for aesthetic intimacy. In “Las Meninas,” the “curation of [the speaker’s] reading list morphs into an actual gallery.” The speaker of “Stillframe Inbox” confides that she’s “always wanted video art in [her] home,” transforming the domestic into a sphere that might also house installation art. Instead of red ropes and security guards, however, “this museum is for touch.”

Ekke explores the privilege associated with the act of naming and the implicit power of articulating a self that is “readable.” “Being a name means you’re someone,” asserts the speaker in “Someone other than else.” In the stunning title poem, “Ekke,” the speaker “eke[s] / out a meaning for [them] self” by thinking through the differences between the names “Klara” and “Clara”:

Names, like language, collect cultural detritus. Even the “mirror is not a safe space,” even a name that sounds like your own name can be strange and messy. Is a dream of a common language possible, or even worthwhile? du Plessis tells me about the expectations associated with writing multilingually, “the assumption that some parts of the text might be alienating,” when really it’s more of “a miraculous process of making connections and communicating in ways that are beyond your control.” Like shedding a burdensome weight, at the end of “Ekke,” the speaker realizes: “I do not belong in any one mirror […] the glass responds differently when I ask in different lingos / there is no lingua franca of the mind.” mRb

Domenica Martinello is the author of All Day I Dream About Sirens (Coach House Books, 2019).