A review of Woman World by Aminder Dhaliwal

Aminder Dhaliwal’s web comic Woman World has made her an Instagram sensation. The comic artist has over 148,000 followers, with her biweekly serialized comic strip garnering an average of 25,000 likes. In this collection of both previously published and new Woman World comics, Dhaliwal serves up slice-of-life anecdotes of a village of women many years after the male species has died out and the planet has been ravaged by a series of natural disasters. Although this post-apocalyptic theme may come across as dark, most of the strips are light and hilarious, addressing issues such as identity, solitude, love, and anxiety, with some occasional angst about the survival of the species.

Woman World was reportedly in part inspired by the LA Women’s March in 2017, an empowering day for Aminder Dhaliwal, when the comic artist met many wonderful people. Dhaliwal apparently started to imagine what the world might be like if it were only inhabited by women. Her collection features a recurring cast of characters, with a handful catching a large part of the limelight. Grandma Ulaana is the only one who remembers the world when there were men, and Emiko is a young girl who believes that men look like Kevin James after she finds a DVD of the Paul Blart: Mall Cop movie. There is also Yumi the blacksmith, Lara the carpenter, Uma the record keeper, Ina the artist, and Doctor. 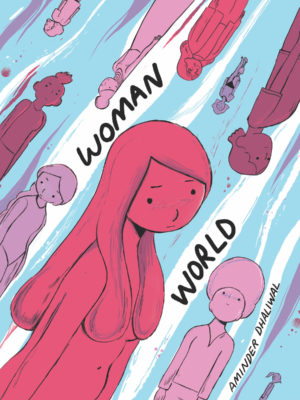 The village in this all-female society is governed by Mayor Gaia, who leads naked, not as a statement, but so she can feel the cool breeze on her underboob. As all great societies keep records, the Mayor gives the order to start an archive, but first the village needs an official name. Mayor Gaia already has a name in mind, but then, so does everyone else. Lady Land, Female Federation, Dame District, Matriarch Macrocosm, Queens Quay, and Gal Globe are other names that are thrown into the ring. But the Mayor prevails and the village is called Woman World, and their first major project is to build a hospital.

Dhaliwal draws her characters in dramatic poses, and their facial expressions convey a wide range of emotions. There is a spirited line to her black and white drawings with grey shading, but there are bursts of warm colour every few pages. Although I did not find all the strips equally entertaining, Dhaliwal strikes a nice balance between the funny and the thoughtful, and the comic artist has a genuine talent for timing. What I liked the most about the collection was that it served up a world that accurately reflects how women interact in everyday life that is at odds with our mass media offerings.

Aminder Dhaliwal is a recent newcomer to the comic world, but we will definitely be hearing much more about this native of Brampton, Ontario. Woman World has already been nominated for the 2018 Ignatz Award for Outstanding Online Comic. An animation graduate of Sheridan College, Aminder Dhaliwal has worked on several animated television series, including Sanjay and Craig, and is currently a director at Disney Television Animation. mRb