The Embalmer / The Faerie Devouring

“This is not an investigation,” proclaims the narrator of Anne-Renée Caillé’s The Embalmer, as she leads the reader into a series of conversations with her father, the titular undertaker. “I am not studying him,” she continues, and yet, throughout the text, she conducts an in-depth inquiry into his work of making the dead presentable. She asks him to share his recollections of the bodies he’s embalmed, what he knows of the people they were. The tone is at once investigative and poetic – the father’s notes on each job contain hints about his own emotional relationship to his work and family. He speaks matter-of-factly about suicides, accidents, murders, and then of the physical realities of the trade: he once considered breaking the tensed up arms of a body in order to fit it into its casket. 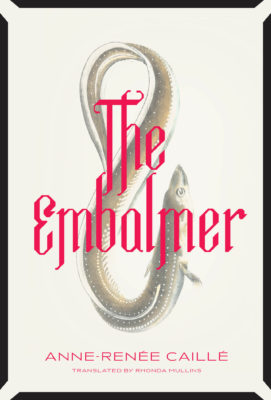 Caillé’s prose is spare, giving just the necessary details of death and its leftovers, and slowly illuminating the central father-daughter relationship, often through what is omitted. The daughter asks her father “about the holes left behind.” Why might a daughter feel the need to conduct an investigation of her father’s professional history? Why might she want to insist that it is not an investigation? There is an undercurrent of sadness here as the narrator struggles to know her father, this person who seems to have spent more time with the dead than the living.

Catherine Lalonde’s The Faerie Devouring likewise centres on an intimate familial relationship: the sprite, a young girl, is raised by her staunch grandmother among a gaggle of other children in rural Quebec. In contrast with the precise, crystalline images and mood of The Embalmer, Lalonde’s language is organic, pulsing, and repetitive in the way of fairy tales. The Faerie Devouring is a loose, impressionistic text that captures the fraught, shifting relationship between the sprite and her Gramma. Lalonde’s characters are physical before anything else, moving constantly but barely speaking. 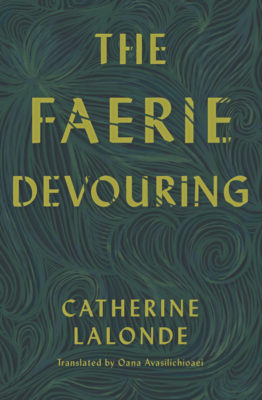 Both texts concern themselves with bodies, their uncontrollable excretions and fissures. Lalonde imbues her bodies with squirming, desirous life – initially the young sprite’s rebellious nature clashes with her grandmother’s expectations: she is “bold as a bitch” and “can’t wash worth a damn.” Caillé’s bodies are lifeless and inert, yet still unwieldy: “Did he have to sew, staple? […] No, it wasn’t staples, but invisible stitches inside to avoid leakage.” In each book, encountering the bodies of the living or the dead brings the narrator, and us the readers, closer to heavy interpersonal truths. The embalmer’s daughter observes the cost of his work: “It weighs the weight of all the dead.”

The dead of The Embalmer deliver an emotional clout that is not quite so well achieved in The Faerie Devouring, which suffers some pacing issues. A middle section of the book, in which the sprite leaves her childhood home and her Gramma to discover herself in the big city, is strangely brief. Too quickly, after a handful of pages of urban delight, she’s an adult visiting her childhood home. We don’t feel the impact of the time that’s passed, nor the significance of her return. Like the narrator of The Embalmer, the grown-up sprite closely observes her grandmother, sensing the fragility beneath the stoic exterior: “There’s a risk that she who’s held herself up for so long with tough talk, tense body and no gentleness might crack.” The outcome of this new knowing is surprising, but there is an overall lack of momentum in the book, which diminishes the intensity of its final scenes. The slow, steady pacing of The Embalmer, and its inevitable build-up of bodies and stories, on the other hand, leads to an emotionally impactful conclusion, stark and brief as the rest of the text, but no less powerful for that. mRb