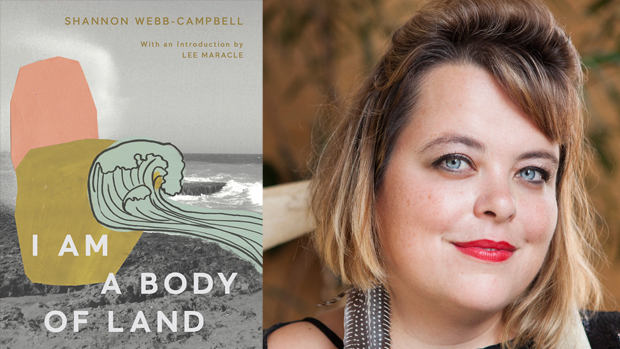 I Am a Body of Land

ral history and archeological evidence show the Mi’kmaq, Innu, Inuit, and Beothuk living in Canada’s Atlantic provinces for thousands of years. However, when the Beothuk territory joined Confederation in1949, Premier Joseph R. Smallwood stated there were “no Indians on the island of Newfoundland.” Thus, as is acknowledged in Shannon Webb-Campbell’s new poetry collection, I Am a Body of Land, “Smallwood’s dismissal prevented the formal and legal recognition of Newfoundland’s Indigenous people for decades.” Well, Smallwood’s dismissal and the preceding centuries of colonization by Europeans.

One of the most significant ways in which Shannon Webb-Campbell responds to Smallwood’s statement – an exemplar of settler arrogance and ignorance – is by making her own declarations. In a poem titled “Letter to Joseph R. Smallwood,” which pays homage to Marilyn Dumont’s “Letter to Sir John A. Macdonald” from A Really Good Brown Girl, Webb-Campbell writes:

after all your declarations
bowing to the settlers,
we’re still here, we remain
Mi’kmaq despite stolen status cards,
none of us landless,
all of us Caribou.

In this lyric epistle, the poet asserts “I’m still here” and “we’re still here.” To say what is and who is defies the notion that Ktaqamkuk (Newfoundland) was ever or would ever be without her ancestors’ past, present, and future. These powerful words are both an echo of Dumont’s, “Dear John: I’m still here and halfbreed, / after all these years,” and part of a pattern of declarative language used throughout I Am a Body of Land. 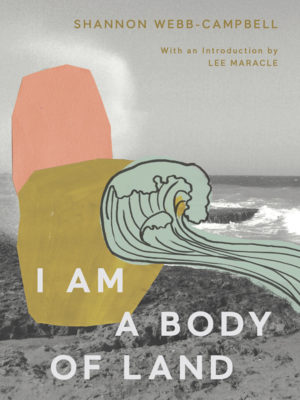 I Am a Body of Land
Shannon Webb-Campbell

Earlier in the collection, in “I Have Been Called Out,” Webb-Campbell writes “I’m still here / tangled up with the colonists.” The line break creates layers of what “here” refers to in a book that is, among other things, dedicated to place and placelessness, or a feeling of physical and emotional exile. “Here” is emphasized by its place at the end of a line, but after the break it is redefined. “Here” becomes not just a claim to the enduring existence of the speaker’s communities and cultures, but also an interior space in which a speaker must confront the ways ongoing colonization has deteriorated her connections to heritage, land, and community.
This desire to undo harm as well as to heal from trauma shapes these poems, which “return to where water / outweighs land” and transform…

This idea of being removed, and called out, also connects to one way I Am a Body of Land became the book that it is. This collection is a “revisioning” of Who Took My Sister?,which was released but then pulled from distribution within a few weeks in the spring of 2018 because of the harmful ways Webb-Campbell depicted missing and murdered Indigenous women and girls. This revision is an insufficient gloss-over of the problems with Who Took My Sister?; a more thorough look would involve discussion of important questions about how writers and artists can ethically represent and respond to injustice and trauma in their work. For now, this context is relevant in that the work of revisioning is part of what I Am a Body of Land is about. As Lee Maracle notes in her introduction, “this is a complex process,” one that involved removing many of the poems included in the first collection. While Webb-Campbell does discuss the process in her afterword, perhaps the clearest evidence to the claim of exploring poetic accountability in this collection is this paring-down.

In an email interview, I had the opportunity to ask Webb-Campbell about the possibilities of confronting this situation through poetry. She says, “I believe the poetics of [I Am a Body of Land] are rooted in an urgent sense of love, and it is my intention to undo the harm of the previous work. Unlearning is part of decolonizing, and rebuilding the structure,” and “[this work is] decolonial in the way it’s more about relationship building, and being able to admit error, rewrite, and repair harm.”

This desire to undo harm as well as to heal from trauma shapes these poems, which “return to where water / outweighs land” and transform: “My body became silk / as I swam across Conne River.” This desire also makes the search for space and place more urgent. The book is dedicated to “anyone finding their way home,” and in “Their World View Is a New Home in an Ancient Land,” the poet engages with more proclamations:

I am not landless, nor law.
in sorrow’s aftermath remind me—
I am a body of land unlearning
what cannot be expressed.
Dig to find a physical knowing,
ceremony.

About how place is experienced, Webb-Campbell says, “the speaker is migratory, and displaced, but not rootless, much like the poet,” and “the speaker belongs to the land.” This sense of belonging in spite of movement and displacement is enacted on the page where the speaker(s) of many of these poems are surrounded by negative space. They often find themselves in short poems, or in lines spread out drifting away from the left margin, or in the lower right corner of a page. While this brevity sometimes feels like an expression of confinement and a wish to escape, especially in “On Airplane Mode,” where the speaker “[flies] west to outsmart / the seduction of harm,” more often these short verses feel like safe places to retreat and be quiet, contemplative, while observing one’s surroundings. These are places in which the speaker becomes what the title of this collection first declares: “a body of land unlearning / what cannot be expressed.”

However, the poems are not all placidly contained in the unexpressed. The collection also enjoys the energy of repetition to build layers of meaning. For example, “The-o-ry Crit-i-cal” taps to the rhythm of anaphora: “This is post revolution / This is post potential / This is post theory” and so on for pages. On each page this poem builds a fence, each line a picket, that, in one sense, attempts to delineate an after – “this is post” – which at the same time insists that there was a before. Notably, this poem directly follows and picks up on a prose poem, “A Hyperactive Text,” which opens with “I’m too tired to be self-reflexive. This isn’t post self-reflexivity.” The density of this piece disrupts the restraint of many of the poems that precede it by filling the page with a speaker abstracting in and out of forms and concepts:

I am in the cells of all living things.
I am a new kind of readership. I am
the author lying. I am a poem talking
about my categorical breakdown. I
am an idea that precedes the text. I
am reading post poetry. I am before
a spoken language.

Like many poems in the book, these share a concern about the act of categorization, placing things within the construct of time, being defined (by oneself and others) as well as overwhelmed by what is projected onto oneself.

The poems in I Am a Body of Land are indeed tangled up in their considerations of home, identity, and memory, as well as with constructs of memorial, community, and trauma. To utter what one is and is not, for these speakers, is crucial to their existence: “unpacking the settler within / I try not to disappear.” But this often places them at the “intersection of trauma and desire,” which is, at many points in the book, a scary place to be. All kinds of fear pulse through this collection, but in Webb- Campbell’s view, “instead of staying stuck, or paralysed by whatever the speaker is afraid of, fear ultimately becomes a motivator, or pathway.” mRb