Little Blue Encyclopedia (for Vivian) is a strange and wonderful hybrid that uses the creation of an encyclopedia about a fictional 2001 television show, Little Blue, to pay tribute to the narrator’s closest friend Vivian Cloze after she’s gone. In the process, it casts beautiful insights onto its many themes: queer and trans living, unrequited love, ongoing mourning, joyful friendship, and the powers of (obscure) pop culture to help us cope.

What can I tell you about the television show Little Blue? Perhaps the main thing you need to know is that Little Blue was Vivian’s favourite show, filled with overlapping, actor- driven televised eccentricity. Catchphrases such as “More soda!” and “Let’s Honkytonk” might give you an idea of the tone. To give you more of an idea (or not): cucumber farms, pigeon racing, the Little Blue Soda Company’s top-secret over-carbonation process, a student talent show in which a participant in a straightjacket escapes from a vat of milk. That sort of thing. Viewing this friendship through Vivian’s eccentric love of this more-than-eccentric show serves as a portal, beaming us directly into deep obsessions, into the messy tangle of inner lives and the struggle to connect them – all the things that matter most. 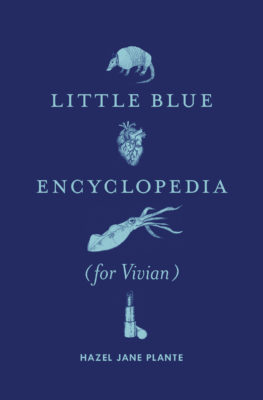 This is a story written with aching love. The playful love for a cult TV show is balanced with the much more painful love for a deceased friend. At one point, the narrator frames her unrequited passion for Vivian using Frank Ocean’s letter, published online just before his major label debut, revealing that his first love was another man. This affection was unrequited but “Frank said he stayed friends with his first love because he couldn’t imagine a life without him,” going on to say “he’s grateful to his first love for what they had, even though it wasn’t what he imagined and wasn’t enough. Still, he’s thankful.” To which the narrator replies that she tries “to practice that kind of gratitude, but it’s hard.”

If we mourn for too long, society might tell us that we’re wrong, that it’s time to move on, get over it, but this book shows, at least at times, that it’s actually conventional wisdom that is misguided. Since Little Blue Encyclopedia (for Vivian), at its core, is about nothing more or less than the fact that the narrator still loves and is still grieving, both emotions intertwined with the difficulties of survival. Plante writes: “She took me under her wing. If she hadn’t, I’m not sure what would have happened. She softened my shame and anxiety about being trans. She showed me that it was possible to wade through that river and reach the other side.” On every page I felt this care, dedication, and purpose. We should all be so lucky to have such a friend, and to have them commemorate us so beautifully.

It would be remiss of me to end this review without saying – plainly and with great admiration – how much I loved reading this book. I cried at the beginning and cried again at the end. I also felt something else, something that might once have been called catharsis, but something I don’t want to summarize too neatly. However, we might be getting close to it with this line from a eulogy the narrator imagines: “The joy of having known you is starting to paint over the pain of having lost you.” These things take time. mRb

Jacob Wren makes literature, performances, and exhibitions. His books include: Polyamorous Love Song, Rich and Poor and Authenticity Is a Feeling. As co-artistic director of the Montreal-based interdisciplinary group PME-ART he has co-created performances such as: Individualism Was A Mistake, The DJ Who Gave Too Much Information andEvery Song I’ve Ever Written. His internet presence is often defined by a fondness for quotations.