The Benjamenta College of Art

A review of The Benjamenta College of Art by Alan Reed

Asimple coming-of-age narrative told in rhythmic prose, The Benjamenta College of Art follows Luca, a first-year student carving outa place for himself at the titular institution. Luca quickly falls in love with Amalia, a fellow student, and, as their relationship blossoms, he embarks on a mission to draw the college itself, a labyrinthian “puzzle box” filled with students – “people who will not ever belong anywhere,” in Amalia’s words – just like him.

Indeed, there is something universal about Luca, whose only identifying feature is his “shaggy” hair, which grows longer and longer over the course of his studies. An unknown novice in the insular world of the college, he is lonely and insecure, and yet somehow certain that he would rather be there than the place he left. Upon completing his first year, he decides to stay in town for the summer, claiming, “he [does] not want to go back to where life was small enough for all of it to fit into a neat little house and nothing else but the sky overhead.” So, he works and he draws, making forays into the city to study the college from various angles. However, when his relationship with Amalia comes to an end a year later, his enthusiasm for his art wanes. 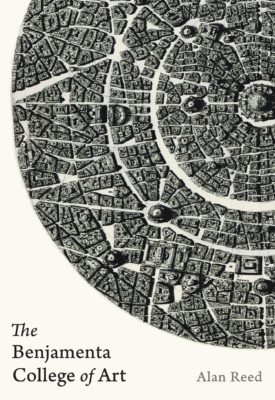 Artmaking is so often misrepresented in popular culture, with talent and inspiration superseding much of the actual work involved. (If I had a quarter for every thirty- second movie montage of a novelist churning out a manuscript, I’d probably have more than the average book advance these days.) In contrast, Luca is not presented as someone who is especially gifted or passionate, nor is he ever fully satisfied with his work, a strength of this novel. His experience suggests that making art is about time and trust. As Reed writes, “He is so close to something, he may not realize it yet but he is, it has been there all along and he just has to notice it under everything else that he wishes it would have been.” The book’s ending sidesteps tropes about turning heartbreak into artistic gold, but there is still the sense that Luca will persist.

Some of Reed’s stylistic choices make this a challenging read. His long sentences carry a poet’s attention to cadence and sound, making them easier to digest when read aloud. Reed doesn’t employ dialogue, and a painstaking focus on actions such as getting dressed or turning on lights can feel tedious. Everyday objects appear repeatedly in Reed’s physical descriptions, which tend to be general; a desk is “the kind of desk that would be in a classroom except that it is here and not in a classroom,” and the doors in the college “are all different sizes and made from all different kinds of wood, when they are made of wood, and not even the door handles are ever the same…” While all of these choices seem intentional, they detract from tension, leaving this book with a lack of forward drive.

Reed’s choice for the name of this college appears to be an overt wink to The Institute Benjamenta, a 1995 art film directed by the Brothers Quay. While I can’t offer commentary on how these two works are related, having not seen the film, reviewers describe it as “quasi-mystical” and “dreamlike,” adjectives that could also be applied to Reed’s work. Incidentally, this college appears to have worked its way into my subconscious, as one night while reading this book, I dreamt that I was there. It was a strange experience – much like making art. mRb