A review of American Blockbuster by Charles R. Acland

Most of us – at least in pre-COVID times – have gone to the movies to enjoy a Hollywood blockbuster from time to time. Maybe you’re a high-culture aficionado whose last blockbuster screening was in your teens, or perhaps you’ve been known to discreetly sneak to the multiplex on a cheap matinee to take in the latest spectacle of gleefully mindless entertainment. We like these movies despite, or because of, their total lack of intellectual stimulation; their immersion in pure, basic appeal to the lowest senses. Charles R. Acland’s American Blockbuster: Movies, Technology, and Wonder picks apart the history and meaning of this universal, yet peculiar, phenomenon.

Knowing full well that these movies are by definition well known, if not overexposed – “The presumptions of crassness, our familiarity with the titles and the attention the films seem to crave, make us more likely to take them for granted and conclude that we already know all we need, or care, to know about them,” he writes – Acland nonetheless makes the argument for a deeper look at the blockbuster genre. Or rather, as he puts it, “a category of production, marketing, and sensation […] an industrial strategy, rather than a distinctive genre.” 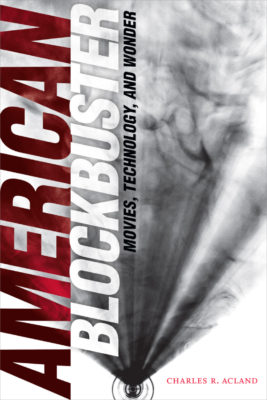 Acland, a professor at Concordia University, begins with an in-depth etymology of the term “blockbuster” itself. The word originated in the Second World War, as a description of a U.S. bomb. The meaning was literal: the bomb was intended to obliterate entire city blocks. And it was heavily propagandized, celebrated in the media for its effect of mass destruction. As Acland notes with understatement: “There is something vaguely unsettling about the lineage.”

Next, Acland details how, following the war, the term slowly migrated into the film lexicon – first in the industry trade press, then to the wider public via media and marketing. Along the way, he demonstrates that the high vs. lowbrow argument around
blockbusters is both longstanding and has shifted through the years. The initial blockbusters were marketed (accurately or otherwise) as high-culture events for an elite audience. It was only when the late fifties saw the rise of independent and
international films, with their leaner budgets and more targeted distribution, that the blockbuster began to be framed by critics as bloated Hollywood fodder for the masses. “This is the familiar and persistent dream of a tasteful middle, not too cheap but also not too garish or excessive,” writes Acland, in one of a few gentle but pointed jabs at cinephile snobbery he takes throughout.

The book’s final section includes a long chapter on James Cameron. It seems odd at first to focus so much attention on a single filmmaker after the much longer view of the industry in the first two-thirds of the book – although Cameron certainly has been synonymous with blockbusters, given the record-shattering budgets, and return on investment, of both Titanic (1997) and Avatar (2009). The chapter focuses on the decade-plus in between these films, which Cameron spent making documentaries that doubled as experiments with new technology. Here, the emphasis on Cameron comes into sharper focus, as filmmaking and exhibition technology is one of the threads Acland weaves through his big-picture analysis of film history and culture: “a blockbuster consistently becomes an advertisement for the economic and technological system that brought it into being, that coordinated the related works, and that delivered it to your eyes and ears.”

At 400 pages (although if you’re intimidated by that length, as I was, know that a decent quarter of it is endnotes), Acland’s book is nothing if not thorough. It’s an academic tome – and although it’s mercifully low on jargon, it is occasionally weighed down with convoluted statements of the obvious (for instance, “the blockbuster production is distinctive if only for the fact that sheer size is one of its primary defining characteristics”). But it’s extremely informative – I, with a film degree under my belt, discovered many previously unknown and fascinating facts – and if you should ever want to defend your love of blockbusters to a film snob, it will give you ammunition worthy of the term’s origin. mRb