A Walk in the Park

A review of The Butcher of Park Ex by Andreas Kessaris

The stories in The Butcher of Park Ex and Other Semi-Truthful Tales, Andreas Kessaris’s book of autobiographical essays, feel pleasantly familiar. For Montrealers, the liberal use of local landmarks and street names helps contribute to the impression that we’ve been here before; over the course of the collection, he attends parties on Clark Street, peruses record stores on Ste. Catherine’s, and recalls childhood trips to the Fairview centre in Pointe-Claire and Les Galeries d’Anjou. But the sense of paramnesia goes beyond place names that exist on a map. Kessaris manages to convey a sense of shared history through the prose itself, bringing the Montreal immigrant experience to life with wry humour and painstaking attention to detail.

Inspired by his life growing up in the Park Extension neighbourhood with Greek immigrant parents – “a haven where new arrivals to Canada first settle until they could afford to live somewhere better” – the collection unfolds as a series of “semi-truthful tales” about Kessaris’s lifelong struggle to fit in. Never quite at home in his ethnic community, and never fully accepted by the Anglaisis, his family’s encyclopedia set serves as both “a pre-internet reference source” and his childhood “refuge” when he doesn’t have many friends. But he’s self-deprecating in his role of odd man out. He jokes that he has “a habit of missing really cool opportunities” – like the time he turned down tickets to the launch party of Alanis Morissette’s Jagged Little Pill. But that example is just the preamble to the story of his “greatest missed opportunity”: his failure to meet the Prime Minister of Canada, the Right Honourable Pierre Elliott Trudeau. His frequent misunderstandings and lacklustre love life provide the comedic backbone and narrative heart of these humorous anecdotal stories. 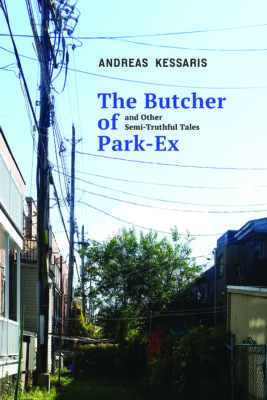 In fact, calling these semi-truthful tales “anecdotes” is preternaturally fitting. Derived from the Greek ἀνέκδοτα (anecdota), meaning “unpublished,” it’s easy to picture Kessaris recounting them aloud in the oral tradition. Full of larger-than-life characters and unexpected wit, Kessaris’s prose style is conversational and filled with fastidious details. Characters that appear for less than a page are referred to by name as if you know them, and parenthetical asides jump forwards and backwards in time to catch you up on bits of personal history and seemingly tangential facts. The result is an assumed familiarity with the reader. Like the gossip the Greek women engage in around the front of the meat counter in the collection’s title story, these stories create a sense of intimacy; Kessaris brings the characters of his childhood to life so vividly it’s easy to believe that we know them, too.

While the boundaries of the neighbourhood he grew up in remain the same over the course of the collection – “At the end of Park Avenue and nestled in between the Metropolitan Expressway on the north, Boulevard de l’Acadie on the west, and railroad tracks on the south and east” – the demographics of the area continue to change. Slowly, the primarily Greek neighbourhood – more than fifty percent of the population, he estimates, when “the Hellenic Community’s influence on that district was in its heyday” – is passed on to the next group of immigrants. The SPG Grocery, former domain of the Greek Butcher of Park Ex, is sold to “three brothers from Bangladesh conveniently named Sabir, Parvez and Gohar.” The iconic neighbourhood has been the home of successive waves of immigrants since the 1950s.

But gentrification and rising rents threaten to push out the neighbourhood’s historic succession of immigrant communities. When Kessaris revisits the SPG again at the end of the title essay, the current owners have changed the name completely. The meat counter is still there, but the few remaining Greek women in the neighbourhood now gather at the “new huge chain grocery store.” mRb

Quinn Mason’s writing has appeared in Lemon Hound, Cosmonauts Avenue, Maisonneuve, and Michelin guidebooks. You can find more of her work at quinnamason.com.