A Brief History of Women in Quebec

Condensing long stretches of history into a unified narrative is both a valuable and risky endeavour: while this approach allows for a panoramic view and tends to be impressive in scope, tackling a span of hundreds of years almost invariably risks flattening that history, sacrificing both detail and impact. Denyse Baillargeon’s effort to provide a comprehensive overview in A Brief History of Women in Quebec, from the arrival of Europeans to the present day, produces a concise and clearly erudite introduction to the topic. Despite an attempt to provide a wide-ranging narrative, however, the book’s contents remain slanted towards a more thorough and energetic engagement with the history of the twentieth century.

Baillargeon introduces three key factors that have shaped the historical experiences of women in Quebec: economic and industrial transformation, women’s social and political activism, and concepts of Quebec nationalism. These threads are interwoven through eight chronological chapters, divided according to historical period, such as “The Early Years of British Rule, 1780-1840.” Baillargeon notes that the chapters encompass increasingly shorter time periods, “reflecting not just the amount of scholarship available but also the speed of the changes that have affected society and women’s lives.” While this is undoubtedly true, the unequal chapters create the impression that the book is more invested in recent history. 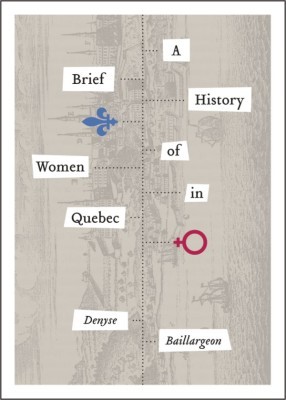 This impression is furthered by the increasing amount of texture and detail, as well as commentary by the author, accorded to the later chapters. The history described in the book’s early chapters tends to be reported rather matter-of-factly, though Baillargeon does provide thoughtful and articulate analysis of its significance. She suggests, for example, that the absence of an outcry by women when an 1849 law was passed abolishing female suffrage reflects how “the ideology of separate spheres had done its work so well that women themselves seem to have accepted a strictly male definition of citizenship.” In later chapters, however, the analysis becomes more pointed and more personal: after considering the gender disparities in high school drop-out rates in the last thirty years, Baillargeon offers an interpretation that is both more spirited and more contentious, arguing that this phenomenon “gives rise to so many alarmist commentaries … [because] girls are outstripping boys, a reversal that seems to threaten male dominance.”

The emergence of this new tone in the later sections of the book has two possible causes. First is Baillargeon’s historical expertise: her own primary historical research has focused on women in twentieth-century Quebec, with particular attention to questions of health and maternity, and she writes about these topics with a notable increase in energy and attention. Second is the ongoing relevance of issues that have emerged in more recent periods, such as questions about the intersection of feminism and sex work or the impact of an increasingly multicultural society. While the more energetic approach at the end of the book is positive in terms of being engaging and provocative for readers, it does create a contrast with the earlier sections. This makes it seem as though the value of earlier history is in its ability to provide context for current events, rather than being of interest in and of itself. For some readers this may be the case, but the book’s stated purview – historical survey (however brief) – would imply a more balanced perspective that some may find lacking.