A History of Antisemitism in Canada

In 1932 – as Hitler was paving his rise to power in Germany – the great Canadian Jewish poet A. M. Klein declared “Anti-Semitism in this country is a mild affair compared with the persistent and malignant forms which it assumes in some countries.” In his preface to A History of Antisemitism in Canada, Ira Robinson, a distinguished scholar of Jewish studies at Concordia University, quotes Klein and maintains that by and large his statement still holds true today. 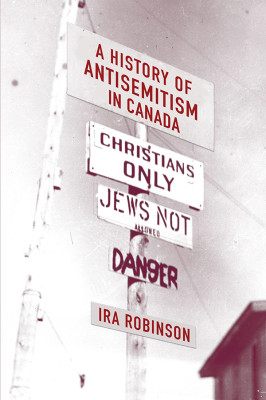 A History of Antisemitism in Canada
Ira Robinson

Why then a book devoted to the history of antisemitism in Canada? Because, argues Robinson, the phenomenon is an important element of the historical memory and political consciousness of contemporary Canadian Jews. As well, the subject continues to be part of the cultural and political discourse of Canada as a whole. Think of anti-Israel activism on Canadian campuses and its intimidating impact on Jewish students. Think of former Prime Minister Stephen Harper’s wooing of Jewish voters with his opposition to the boycott-Israel movement. “It targets the Jewish people by targeting Israel and attempts to make the old bigotry acceptable for a new generation,” Harper said in a speech in 2014.

“The old bigotry” was rooted in the Christian religion. Today’s antisemitism – coming as it does in a post-Holocaust era when overt anti-Judaism is unacceptable – has much more to do with politics centred on the existence and actions of the State of Israel than with religion. But it remains a charged subject, even the spelling of the word evoking debate. Robinson adopts the philosopher Emil Fackenheim’s alternate form, contending that the lower-case version without the hyphen refutes the idea “that there is an entity Semitism which ‘anti-Semitism’ opposes.”

The book surveys Canadian history through the prism of antisemitism, maintaining that a strong case can be made for the 1830s and 1840s as a golden age of Canadian Jewry. During that period, the legal and civil rights of Canadian Christians and Jews were brought into alignment with each other. This state of affairs, however, was later undermined by the effects of mass immigration to Canada and the birth of racist antisemitism in Europe in the late nineteenth century, and their impact on Canadians.

Viewed from the perspective of antisemitism, the record of the twentieth century is predictably dispiriting. From social exclusion at hotels and beaches, university quotas, and boycotts of Jewish businesses prior to and during World War II, to the painful discouragement of Jewish immigration in the interwar period and the flourishing in the same period of anti-Jewish rhetoric, to postwar Holocaust deniers and the reluctance to prosecute Nazi war criminals living in Canada, there is much to regret and reflect upon.

In fact, many laws have been enacted to suppress hate speech and literature as a way to protect Jews and other minority groups. A number of community organizations and agencies, including B’nai B’rith Canada and the umbrella organizations representing Jewish federations across the country, are vigilant in monitoring even small incidents of Canadian antisemitism. Robinson points out that though it is a widely held belief within the Jewish community that even small acts of antisemitism are threats, there is also a strong minority opinion among even Canadian Jews that at times trifling incidents are blown out of proportion.

A History of Antisemitism in Canada is a work of synthesis concentrating on secondary research across a variety of disciplines. Aimed at students of Canadian history, Canadian Jewish studies, Canadian ethnic studies, and of antisemitism in general, Robinson’s approach is scholarly. But though the methodology is academic, the subject is significant and timely enough to warrant a wider readership.

Elaine Kalman Naves is the author of, most recently, The Book of Faith, a novel.