A Message for the Emperor

A review of A Message for the Emperor by Mark Frutkin

Mark Frutkin’s new novel, A Message for the Emperor, set during the last days of China’s Song Dynasty (960–1279 ce), is half philosophical meditation, half historical road trip. So while a great deal of wisdom – both Confucian and Buddhist – is threaded through this mainly quiet, thoughtful narrative, readers are also introduced to a refreshingly original villain. What do readers learn about 13th century dynastic China from A Message for the Emperor? Don’t trust the eunuch.

Still, it takes quite a while for the novel’s protagonist, Li Wen, a master landscape painter, and his antagonist, the aforementioned eunuch, to cross paths. In the meantime, Frutkin’s plot could hardly be simpler. It’s all there in the title. Li Wen is engaged by his revered teacher, a Buddhist monk, to deliver a secret message, a secret to him as well, to the Chinese emperor. 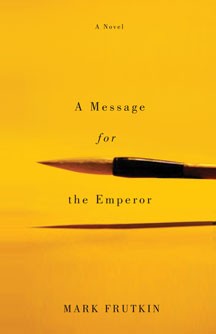 A Message for the Emperor
Mark Frutkin

All he knows is that the long journey south to the court in the capital of Linhan will require of him “a full year of walking and painting.” Li Wen hesitates at first – “Who am I to deliver a message to the Emperor?” – but eventually agrees to go. He surmises correctly that the message is of the utmost importance to the emperor and the empire.

So important, in fact, that Li Wen risks his life repeatedly to reach his destination. Along the way, he survives a flood, eludes bandits, escapes entombment, and, most important of all, overcomes self-doubt.

He keeps painting throughout these trials, completing four masterpieces, one for each season. This is likely more than a coincidence since it plays to Frutkin’s own strengths
as a fiction writer and poet. Frutkin, who lives in Ottawa and whose novel Fabrizio’s Return won the 2006 Trillium Award, has a keen eye for description. Here, for example, is Li Wen on the process of making art and making order out of art:

The black ink pooled and he began to consider his first stroke. Before that stroke, everything was chaos, ink was simply ink, brush was brush, paper was paper, mountain mountain, snow snow. They were disparate fragments of the world, without harmony.

The first touch of brush on paper would start to resolve the chaos, a pulse driving the stroke right out to its tip. His hand would know where to move…

In life, as any Buddhist monk would likely insist, the journey is invariably more important than the destination. In novels, though, you want the opposite – a payoff in the end. And when Li Wen finally arrives at court, Frutkin provides a good deal of intrigue. There is, for instance, the persistent worry that the Mongol armies, led by Kubla Khan, are on the way to vanquish the capital.

What do readers learn about 13th century dynastic China from A Message for the Emperor? Don’t trust the eunuch.

Most of the action, though, comes courtesy of Po Cheng. He’s not only the court’s chief eunuch; he’s a landscape artist himself, though inferior to Li Wen. As a consequence, he’s determined, at any cost, to prevent his newly arrived rival from seeing the emperor.

Frutkin also makes the most of his research into this historic period, so in case you didn’t know what a eunuch’s day is like, there’s this detailed job description:

[His] task is to monitor the Emperor’s concubines, ensuring their sexual loyalty. This is done by marking their bodies with a paste that comes from geckos fed on cinnabar that turns the lizard red. The lizards are then killed and pounded in mortars. It is believed the marks from the gecko paste will disappear if the concubine has illegitimate sexual intercourse.

In the end, Frutkin’s A Message for the Emperor deftly balances the yin and yang of storytelling. It mixes light with shadow, meticulous observation with just enough swashbuckling adventure.mRb