A Month of Sundays

A review of A Month of Sundays by Edward O. Phillips

If Edward O. Phillips’ novel, A Month of Sundays was a film, it could easily fall into the category of screwball comedy, that genre that featured urbane characters, a few loveable scoundrels, and a fistful of snappy dialogue liberally sprinkled with wry observations. As a novel, it’s just as delightful despite a storyline that begins and ends with a death in the family. 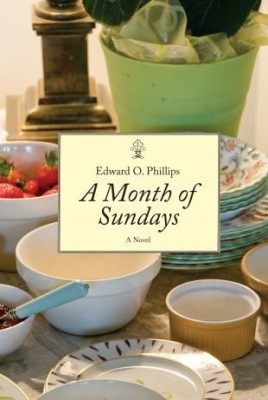 In this, his latest novel in the Geoffrey Chadwick series set in Montreal, Phillips tackles the double-barreled bane of getting old and of dealing with the grief of losing a loved one. Chadwick is a retired lawyer, a gay man who found love and a binding relationship with Elinor, his wife and closest friend. As the story begins, Elinor has just died and Chadwick is planning her funeral while juggling the onslaught of emotions that comes with loss.

Despite his grief, Chadwick is always ready with a wry observation. He opines that gay men “are perhaps the last bastion of what may be considered to be an outdated and quaint civility,” which may be why he has neither a cellphone nor the inclination to check his email every hour. To honour Elinor, he plans a party in celebration of her life and gets out the Rolodex to hand address the printed invitations.

His party planning and reminiscences of Elinor are interrupted by the arrival in his life of a son he never knew he had. Suspicion morphs to pride when the son, conceived hastily one night in college, turns out to be a dead ringer for Chadwick in more ways than one. The middle-aged Harold, a retired schoolteacher, has inherited Chadwick’s quick wit and love of repartee, as well as a penchant for Broadway tunes. When Harold accidentally breaks his ankle, preventing him from returning to Toronto, Chadwick sees it as an opportunity to bring them closer together and offers Harold a bed in which to recuperate. What starts out in hope, however, ends in sad resignation. Chadwick discovers that Harold does not resemble him in the ways that truly matter. And in this too, there is a loss to be dealt with.

Phillips has created a memorable cast of characters including Chadwick’s controlling sister; a boozing buddy who’s committing suicide by martini; and his 97-year-old mother who, though mostly silent, comes to life through Phillips’ deft descriptions: “Colour leached from her hair, her skin, eyes. She gave the impression light could pass through her, that she cast no shadow.”

The writing is often evocative, such as this description of a young niece: “With Jennifer, I feel I exist for her even when I’m not in the room.” But what come off best are the observations that, when not biting, often nip at the funny bone: “When I was in college…the only thing worse than being in bed with a live man was being caught with a dead woman.”

By the end of the novel, Phillips has handed his alter ego two dead women, and still has made the journey between a wonderful read. A formidable feat.

Montreal writer and poet Gina Roitman is the author of Tell Me a Story, Tell Me the Truth. Gina’s first (and last) film documentary My Mother, the Nazi Midwife and Me has been purchased by the CBC Documentary Channel. It is airing on May 14 and May 18, 2013 at 8 p.m.