A Natural History of Transition

A review of A Natural History of Transition by Callum Angus

Callum Angus is a trans writer based in Portland, Oregon, and A Natural History of Transition is his debut book. Published by Montreal’s Metonymy Press, the collection feels almost too cohesive to mark the eight short stories as disparate tales. Though they are differentiated by their length, stylistic, and genre affiliations, they’re snugly bound together by their conceptual intent. Winding through each are portrayals of transness that intend to leave behind the limiting ways in which we typically conceive of, argue about, and politicize it in today’s world.

Though the stories don’t explicitly engage with modern politics, burrowing instead into alternate histories, magic, and the supernatural, A Natural History of Transition is bound up with modern discourses and politics. Stories of transitions that transcend the realm of possibility – women becoming rock formations, children becoming swarms of bugs – invite the reader to reflect upon the limiting and linear ways in which we conceive of transition in the real world.

Angus abdicates from these real-world conceptions by setting transness instead against narrative landscapes that are simultaneously natural and supernatural. Nature is always present and tangible as the reader is directed to observe birds’ migratory patterns, insect swarms and plagues, rivers, mountains. The ever- shifting, ever-evolving, cyclical, and contextual elements of the natural world envelop the stories of transition that are intertwined with it. 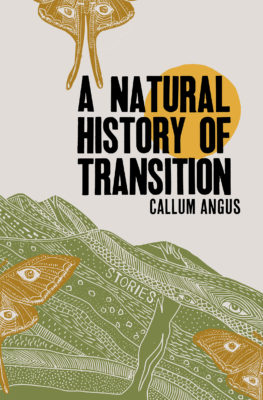 There’s a certain fairy-tale quality to the stories. Prose that focuses in quaint detail on nature and its constituents slowly ebbs and gives way to moments of twinkling unreality. The natural world has a capacity to be both mundane and magical – migrations and tectonic plates shift about in more or less quotidian pat- terns, but under the right gaze a shimmering lake or a regal deer can seem in- credible and unreal. This same sort of duality is true for transness, a state of being that’s completely banal but also somewhat fantastical.

Angus’s prose can be soothingly poetic or eerily illuminating, but he can falter with that balance when he’s not given enough breathing room. The shorter stories, like “Rock Jenny” or “The Swarm,” don’t fill into themselves completely and can leave the reader wanting for more. They can feel a bit like workshopped experiments, not quite ready to be plucked from their still-ripening skin.

Through the longer stories, however, Angus’s abilities as a writer and storyteller are given ample room to stretch out and create mystifying, captivating narratives. “Winter of Men” focuses on a strange convent in America of the late 1600s, one in which something curious is happening in relation to gender. This genre of LGBTQ+ period piece isn’t particularly new, but by focusing on colonial interactions with Indigenous people and how religion and women were involved in settler colonialism, a new and nuanced perspective is brought to the subject matter.

In the title story, a trans person returns home to their small town after many years of estrangement to follow through on a familial duty. This is a familiar narrative form that’s been taken up by many other trans writers. Angus toys with the tradition by moving the narrative into a place of supernatural horror, surprising the reader with genuinely frightening scenes painted with a terse prose that communicates anxiety and unease excellently.

Though at times uneven, A Natural History of Transition is overall a beautiful and mystifying collection of stories that arrives at a time when it’s much needed. Recuse yourself from transphobic polemics and absorb yourself instead in stories that seek to discuss transness in a more freeing way, unconcerned with the boundaries of the real and everyday.mRb

Nour Abi-Nakhoul is a Montreal-based writer whose work has appeared in The Cut, Xtra, Hazlitt, Bandcamp, and more. Find her on Twitter @nourmal_woman.