A Stain Upon the Land

A review of A Stain Upon the Land by John Kalbfleisch

On March 30, 1827, a dreadful murder occurred in Montreal. Someone slipped the muzzle of a shotgun through the open window of a house on Saint-Joseph Boulevard and blasted the unsuspecting victim in his own parlour.

The bustling little city was horrified. Inquiries were made, suspects arrested, but the solution remained elusive. Was it McDonald, a drunkard and ne’er-do-well? Or perhaps the personable Édouard Huot? Or maybe the strapping Ewan Cameron, from the Canadian Glengarry, just over the Upper Canada line? The papers of the day, the Montreal Gazette included, carried full reports. But the police of the period, the Watchmen, were flummoxed. 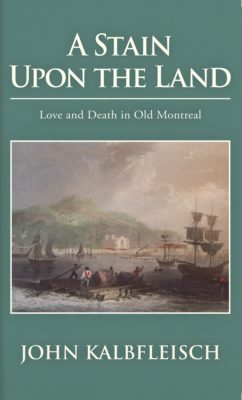 So here’s the thing about A Stain Upon the Land: it’s all true, or almost. Author John Kalbfleisch has fashioned a fast-paced and compelling thriller out of the facts of the case, and only when necessary, he notes, only when there are holes in the historical record, has “imagination … been recruited to fill the gaps.” (A handy dramatis personae, including who’s real and who isn’t, is included to keep everyone straight.)

Kalbfleisch displays a profound knowledge of early nineteenth-century Montreal in the book, not surprisingly, as he was for many years (until just recently) the history columnist of the Montreal Gazette. He has placed his reconstructed characters (and the required few he made up) in the larger picture of Montreal life at the time – the building of the great Notre-Dame Basilica (by the ambitious Irish-American architect James O’Donnell), the tumultuous appearance in the city of the English actor Edmund Kean, the great log rafts arriving from up the St. Lawrence River, John Molson’s new steamboat, the cholera epidemic of 1832.

And he guides us about the city itself, not ostentatiously, but quite naturally, to the ruins of McTavish Castle (known to be haunted), the new Dalhousie Square, the comfortable Cloutier’s Inn, the Ogilvie flour mill (down below the newly built Lachine Canal), and across the waterways that still ran within the city (however foul some of them had become), including the Petite Rivière Saint Pierre and Saint Martin’s Creek.

Kalbfleisch also takes us on a little tour of forgotten words, perfectly worthy words he surely encountered in his nineteenth-century reading, now long vanished from everyday speech and indeed from most print dictionaries: fleering, slewed, estaminet, punnet, feuch, cheval glass, dwam, freit, and many others. They add a nice touch.

Some of the action in A Stain Upon the Land takes place away from Montreal, in the old Scottish townships, now Glengarry County, Ontario, an area an hour west of the city but not much known today to Montrealers. Ewan Cameron, the strapping suspect (and real person), is a native of Glengarry (where his name would be pronounced Yo-an). It is he who brings a great raft of logs from Glengarry to Montreal that in the book, at least, and perhaps in real life, form the underpinnings of Notre-Dame Basilica. Cameron also has dealings with David Thompson, the explorer and mapmaker, at his Glengarry home, which, by the way, still stands today, in the village of Williamstown.

I must say I’ve often been suspicious of historical novels, fearing that one gains neither good fiction nor reliable fact. But I was won over by A Stain Upon the Land. It offers good characters and swift action, and it illuminates an interesting era in Montreal history. And if one is unsure whether a certain development is real or otherwise, once things are flowing as nicely as they do here, I’m not sure that it makes any difference at all. mRb