A Stone in My Shoe

A review of A Stone in My Shoe by George Ellenbogen

George Ellenbogen is a cartographer of the heart and of the memories it contains. In his memoir, A Stone in My Shoe: In Search of Neighbourhood, he maps the circumstances leading to his family’s immigration to Montreal from Europe in the years prior to World War II. Having conducted extensive interviews and studied “old street maps, ship manifests, photo albums, and yellowing newspapers,” he recreates the familiar faces, city streets, experiences and smells that shaped his childhood and adolescence. Not only is this the story of a family and community, but it is also a guided tour of mid-century Jewish Montreal.

Ellenbogen’s intention in writing the book was to document family anecdotes and memories to share with his partner: the writer Evelyn Shakir, now deceased. The book became, instead, a reflection on the importance of community and acceptance. Of his memories, the author writes in the introduction that they “became portals that opened to one larger montage, in which there was an unceasing call for belonging, neighbourhood, community, even when that community was limited to no more than two.” 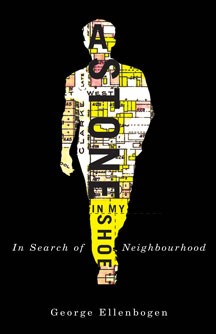 A Stone in My Shoe
In Search of Neighbourhood
George Ellenbogen

Having published several books of poetry, Ellenbogen chooses words that are, not surprisingly, poetically resonant. They mark the challenge of recreating the past. The book is a poignant tribute to the memory of his family and community, and to Shakir, whose own work on the Arab-American community was similar in spirit and trajectory.

Descriptions of the day-to-day take on a slightly more direct prose style. Family celebrations are one such example, and, what better way to show this than through the stomach? Images of food, drink, and family dinners prepared by his grandmother and aunt are inviting – you can hear the clink of cutlery upon dinner plates. During the week of Passover, “plates heaped with beef, either roasted as brisket or boiled, served with mounds of chicken, followed by stewed fruit covered the table from end to end.” Ellenbogen punctuates this memory with the reality of a heart-rending past: “Remembering the hunger she had experienced in Poland, my grandmother determined that we should all eat until the very act of swallowing became impossible.”

The struggles that brought Ellenbogen’s maternal and paternal families to Canada are well documented: World War I and economic ruin, the process of immigration and the hope for a better life. Making a new life in Quebec, his mother and father built successful businesses in dressmaking and in auto repair, respectively. Ellenbogen visits the Polish town where his mother grew up; recollections of her wartime experience there and of the Holocaust echo deeply. Despite Ellenbogen’s extensive dislike for grade school and his “casual performance” in high school, he makes it to McGill and Tufts universities and goes on to teach poetry at Bentley College in Massachusetts until his retirement.

In describing his fondness for the work of French painter Édouard Vuillard, Ellenbogen explains that the artist experiments “with ways of seeing, ways of knowing.” As a work of art and a family genealogy, A Stone in My Shoe experiments with this approach by navigating the past with love, abundance, and literary resonance.