A review of A Three-Tiered Pastel Dream by Lesley Trites

The title of Lesley Trites’s debut work serves as a useful metaphor for the relationship between the eleven short stories included in the collection. While the tiers of a cake may have different flavours, they also fit together, with unity often created by the decoration. Likewise, Trites’s stories echo with distinct styles and voices. Some are narrated in the first person, others by an omniscient figure. The action might take place solely within the interior of a single home, generating a sense of the claustrophobia wrought by seemingly immutable choices, or follow the course of a meandering journey across continents to illustrate how a relationship has likewise lost its way. What all the stories share is an exploration of the ambiguities of contemporary femininity and a commitment to an aesthetic rooted in the use of subtle detail. 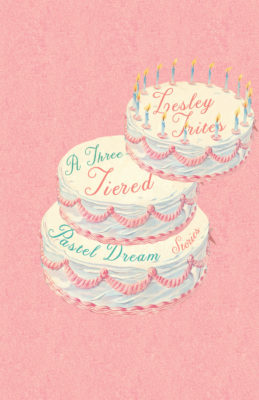 Several major themes resurface throughout the collection: alcohol, mental illness, fertility, and the possibility or eventuality of loss underscoring all of them. The protagonist of each story is always a woman, grappling with either a history that threatens to unsettle the present or a choice that will redefine her trajectory. In the first story in the collection, “Pepto Bismol Pink,” a seemingly casual encounter leads first to an unexpected pregnancy and then to tentative steps towards a new form of connection. Conversely, in the titular story, a woman reflects retrospectively on her impulsive decision to abandon her daughter only after that daughter has grown into a successful adult. A reader is left with the feeling that these female protagonists could be sisters, or versions of each other; there is also the lingering sense that they could be versions of the reader. Trites highlights moments of crisis and emotional trauma without ever sensationalizing them. Grief, emotional breakdowns, and the dissolution of relationships are handled with a delicacy that underscores the way in which they can be simultaneously ubiquitous and earth shattering.

The stories are at their best when sparse detail is used to convey a great deal about a character while respecting the narrative economy demanded by short fiction. When the protagonist of “Pepto Bismol Pink” takes a day off work to confirm her pregnancy, we tellingly learn that she has never taken a sick day before, and that “she worries about who will unlock the meeting rooms, whether anyone will need office supplies in her absence.” Occasionally, that deft subtlety is discarded in favour of metaphors that verge on heavy-handedness. One story opens with a woman anxiously substituting cranberries for pomegranate seeds as she prepares a salad for an uncomfortable dinner party; by the end of the story, she has unexpectedly met a romantic prospect. While the tentative unfurling of their interaction is nuanced, the story ends with its central symbolism falling flat as the narrator muses, “Maybe the cranberries—aged, sweeter, less tart—were just what I needed.”

When nuanced renderings of intimacy, resilience, and self-awareness are presented in Trites’s uncluttered prose, the collection excels. The longest story in the collection, “Rituals,” is also the strongest, allowing for a sustained meditation on how a seemingly romantic globetrotting journey serves to highlight the cracks in a failing relationship. The keen use of observational detail shines when applied to evoking a sense of place, and the disorientation induced by the exotic. The less sprawling stories use the same strategies to cast seemingly fragmented observations into a richly textured mosaic. Because of the unifying themes, the stories benefit from consecutive reading, and the collection functions remarkably well as a satisfying, cohesive whole. Characterized by delicacy in style and in form, Trites’s writing leaves a reader better attuned to what, in stories and in life, often goes unsaid and unnoticed.mRb