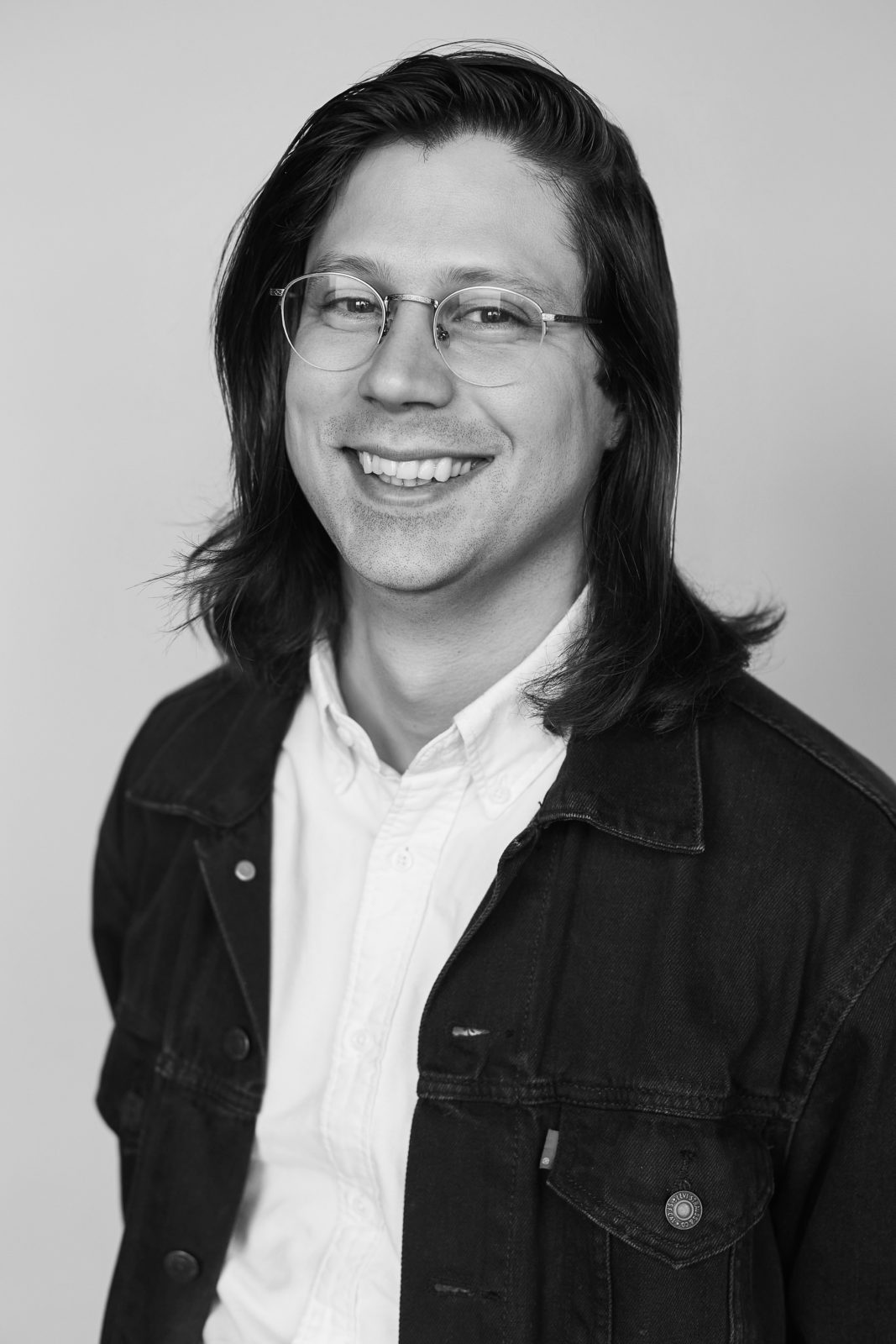 Aaron Vansintjan on The Future is Degrowth

In my interview with Aaron Vansintjan, one of the co-authors of The Future is Degrowth, he tells me that degrowth is, at its core, “the idea that we can organize society and the economy not on the basis of economic growth, but on the basis of well-being and living well together.”

At first glance, the term “degrowth” conjures images of economic recession or collapse – of imposed austerity. It’s inflammatory. But it also invites us to ask: if not growth, then what? Which, as many advocates for degrowth would argue, is exactly the point.

Proponents of degrowth want to challenge our view that growth is an inherently good thing. Growth isn’t inherently bad, either. But degrowth advocates are critical of the material and social impacts of structuring our economies around accumulation and expansion. Vansintjan and his co-authors Matthias Schmelzer and Andrea Vetter write, “growth is the cornerstone ideological construct justifying uneven global relations, growth dependencies, and policies that uphold private profits.” In other words, modern societies are “structurally dependent on expansion,” and this expansion, they argue, is at the root of drastic inequality on global and local levels. 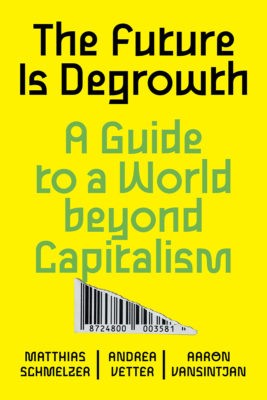 The Future is Degrowth
A Guide to a World beyond Capitalism
Matthias Schmelzer, Aaron Vansintjan, and Andrea Vetter

Like most theories of degrowth, The Future is Degrowth begins with an analysis of economic growth, expansion, and extractivism as unsustainable. Early in the book, the authors write that growth is “a powerful stabilizing mechanism of capitalist modernity – yet it also destabilizes the ecological foundations of human life on this planet.” The book provides strong argumentation for growth as unsustainable, which I found compelling. From a global scramble for fossil fuels in April to record-breaking heatwaves in India and Pakistan in early May, it feels like the climate crisis is leading us to environmental, social, and economic catastrophe. That said, given how central growth is to the way we think of progress, I wonder whether directly challenging a reader’s preconceptions invites them to engage with the book’s ideas, or whether it prompts a complete rejection of the political and economic philosophy proposed by The Future is Degrowth.

The answer depends on who the book’s intended audience is. Verso Books, a left-wing publishing house based in New York and London, approached Schmelzer and Vetter to publish a translated and expanded edition of their book, Degrowth/Postwachstum zur Einführung,  a shorter book published in German in 2019. In January 2020, Montreal-based editor Vansintjan joined the project and was tasked with translating, expanding, and adapting the initial book for a broader Anglophone audience.

In our interview, I asked Vansintjan who the expanded version was aimed towards. While he highlighted the importance of degrowth being made accessible to a broad audience, he mentioned that there are a number of books that serve as an introduction to degrowth, so that wasn’t really the aim of The Future of Degrowth. Instead, he and his co-authors aimed to engage with leftists and progressives who, as he said, “might already be critical of capitalism or think that we need a different economic system, but might disagree or be less familiar with degrowth.”

Another audience the book was tasked with reaching was the English-speaking left. Degrowth has gained traction on the left in parts of Europe, such as France, Spain, and Germany, but hasn’t seen as much movement in countries like the UK, the US, and Canada. Vansintjan notes that even in Montreal, degrowth (or décroissance) is more popular in Francophone leftist circles than in Anglophone ones. Part of the book’s intention, then, was to start a conversation with Anglophone leftists who might already be sympathetic with the book’s starting point.

In our interview, Vansintjan tells me that the three co-authors began working on the expanded edition in March of 2020. “Almost all of our conversations – they were all on Zoom; we haven’t met in person yet – were in the context of the pandemic,” he says. “We would start by talking about how things were going in Berlin, how things were going in Montreal. We would share stories and we would talk about the bad things happening, but we would also talk about some of the unprecedented policies governments were putting in place.” Vansintjan mentions CERB, which he describes as a form of universal basic income.

While Vansintjan is clear that the economic shutdown caused by COVID was not degrowth (“recessions are not degrowth because the economy is still dependent on growth,” write the authors), he suggests that there was something in seeing how things – policies, governments, the world around us – could change almost overnight.

When I ask if his thinking has changed since those early days of the first wave, he tells me, “It does feel different. You write a book, and – especially nowadays – immediately after, something else happens. Like the Ukraine crisis, or inflation, or these supply chain crises. And it’s impossible to include that. Once again, we’re in a totally different world – it feels like you’re always one step behind. But I think that what the COVID crisis did to a lot of people was to show that the way things are isn’t static – that it doesn’t have to be this way. And as we move on in this world of constant crisis, we can hold on to that realization.”

While theories of degrowth are often framed in terms of the global economy, Vansintjan highlights the impacts of growth in our daily lives. He mentions housing justice, noting that speculation on real estate is “the major way by which profit is being made in Canada today,” leading to the current situation where “it’s impossible for normal people to have any stability in their housing.” To Vansintjan, housing justice is one of many movements that can work in parallel towards degrowth.

Despite being geared towards an audience that might already be familiar with critiques of capitalism, the book diligently lays out its argument from start to finish; rather than assuming a reader’s preconceptions, it is comprehensive in its argumentation. While this is useful, the book can sometimes feel a bit repetitive as a result. The authors also engage frequently with counter-arguments. Similarly, though this thoroughness is laudable, it straddles a line between audiences, making it sometimes read as verging on defensive.

The book’s final chapters are dedicated to proposals and pathways for degrowth. The book gives a number of examples of current movements and potential actions; as the authors write, “There are endless ways to follow this path – from starting a workers’ cooperative to setting up a mutual aid centre […]. Whatever you choose to do, know that our trajectories are aligned.”

In our interview, Vansintjan warns degrowth advocates (and leftists in general) against appropriating movements that seem to be aligned with their cause, but also notes that there isn’t just one path towards degrowth. Though I think there is a tension between appropriation and strategic alignment that’s worth navigating, it’s hard to wrap my head around how disparate movements are currently merging to demand a complete restructuring of the global economy.

That said, when I ask Vansintjan about how he maintains hope for positive and structural change, he tells me, “I think utopianism is often used as a dirty word – to dismiss things as unrealistic. But it’s extremely important to not just be against things, and to have a positive vision of what we want to be building towards.”mRb

Athina Khalid is a writer who lives in Montreal.