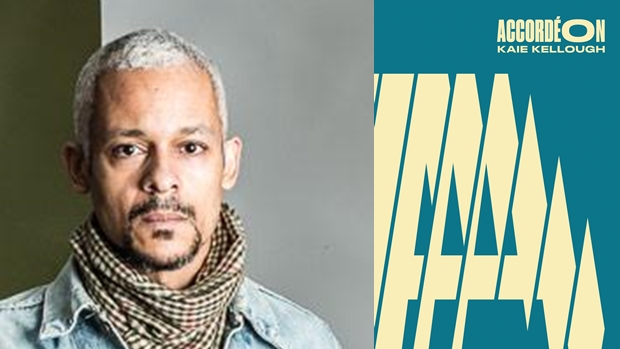 Standing on the stage at Casa del Popolo, surrounded by blinking sound mixers and effects controllers, Kaie Kellough begins reading from his debut novel Accordéon in a low, even tone. It is a snowy night in late January, but the dimly lit room is warm and full of affection for the Montreal poet and self-identified word-sound systemizer. Soon a recording of Kellough’s own voice reading the novel overtakes him. The live sound performance intersperses distortion and other effects, at times contorting the recorded voice, an unnamed Montrealer’s anxious monologue about the city. Audience members nod their heads in agreement, laugh, and finally erupt into applause.

It was an ideal launch for a book that practically leaps off the page, its long careening passages and rhythmic, precise language demanding to be spoken. It also revealed the seamless connection between Kellough’s ongoing work as a poet and performer and this, his first foray into fiction.

Accordéon is a smart experimental novel with a timely message. Our narrator is an anonymous itinerant who stands downtown, at the corner of Sainte-Catherine and Saint-Mathieu Streets, delivering monologues mostly ignored by passersby. Having come to the attention of the ominous Ministry of Culture, which seeks to catalogue and thereby shape and control Quebec culture, the narrator has been kidnapped and their monologues have become testimony about the state of Quebec society. What readers have before them is a transcript, sporadically annotated by three ministry agents, each of whom has their own ideas about national culture.

Kaie Kellough, author of Accordéon, was photographed at Monastiraki in Montreal by Terence Byrnes for our Spring 2017 cover story.

Over espresso in Little Italy the week before his book launch, Kellough tells me the novel was inspired by events of the recent past, particularly the tensions that exploded around the proposed Charter of Values. “That whole moment was very dramatic and I think it really resonated deeply with a lot of people in Montreal,” Kellough says. “It was an attempt to curate a vision of society, down to reaching into people’s personal lives.” Readers in Quebec will recognize the fictional Ministry of Culture as a thinly veiled version of efforts by the real government to police acceptable forms of cultural expression. Kellough imagines his narrator as someone who has been acutely affected by these conflicts, and whose testimony dramatizes the tensions of contemporary Quebec.

Kellough, who has lived in Montreal since 1998, was born in Vancouver and grew up in Calgary with family roots in Guyana. He tells me much of his work has been concerned with how people move – or are restricted from moving – through the city. People of colour, immigrants, and particularly those without citizenship, experience Montreal very differently from white, middle-class Quebeckers. Kellough says he wanted Accordéon to express the “presence and contributions that different people have made to the society we live in” but also to highlight that “people’s positions are often very precarious.” Montreal is not one place but many. Early on, the narrator of Accordéon declares their monologue “is about the city right now, as a dynamic entity.” It is this dynamism – the sense of a city narrated in multiple registers – that drives the novel. While the Ministry of Culture wishes to isolate one true version, Accordéon reads as a counter-archive, emphasizing the multivocality of Montreal. 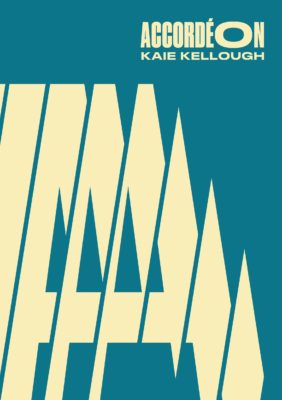 The conversation that emerges among the annotators creates the book’s forward narrative motion, but the testimony itself is non-linear, a series of looping, self-reflexive fragments full of non sequiturs, sense and nonsense, a clairvoyant stream-of-consciousness that weaves details from the present into those of the distant and recent past. The narrator insists that everything in the history of the province is happening at the same time – has happened and is still happening. The ease with which Kellough blends past and present is extraordinary; the first two pages of the novel left me breathless. They include references to buying moisturizer at Jean Coutu, the Plains of Abraham, the École Polytechnique massacre, the martyrdom of Brébeuf and Lalemant, a video posted to YouTube of an Arab boy being beaten by police on the metro, the fur trade, the student strike, and the mythical chasse-galerie, or flying canoe, soaring over the city.

Countless references to real historical and contemporary people, places, and details in Montreal litter the prose. These are not characters or settings; rather, they are invocations that energize the psychogeography of the novel. Anarchopanda, Bixi, Marie-Joseph Angélique, Fredy Villanueva, Ellen Gabriel, Nomadic Massive, Lafleur, Pop Montreal, Jaggi Singh, Stéfanie Trudeau, the list goes on and on.

“I didn’t set out deliberately to include certain people or entities,” Kellough tells me. “They appeared naturally. They are part of the popular imagination of Quebec, like cultural landmarks. And they also stand for more than themselves. They’re like little chaos machines in a narrative, because you never know how they’re going to explode.” Depending on a reader’s personal history, certain names will bring to mind any number of memories, emotions, or ideas. “That adds additional sub-narratives and subplots I might not have intended.”

“[Certain people and entities] are part of the popular imagination of Quebec, like cultural landmarks. And they also stand for more than themselves. They’re like little chaos machines in a narrative, because you never know how they’re going to explode.”

Among the historical and contemporary figures who appear in Accordéon are numerous Montreal writers, whose presence has a particular resonance. For instance, an early scene in which the narrator sees Dany Laferrière floating through a metro station evocatively mirrors Laferrière’s own description of seeing Henry Miller in How to Make Love to a Negro without Getting Tired. But Kellough also had a more prosaic reason for including it: it really happened. “I saw him – in the metro,” he tells me with a laugh. “People in the arts in Quebec are part of the physical landscape of Montreal. Montreal’s a small place. So that’s part of the reason for putting them in the book: you will run into them.” Throughout the book, this combination of playful intertextuality with fantastical elements and realistic details of contemporary Montreal – a short scene in which the narrator eats a croissant is magnificent – underscores Kellough’s ingenuity and thoughtfulness as a writer and is among the great joys of the novel.

Kellough mentions Nelly Arcan, Hubert Aquin, and sound poet Claude Gauvreau as Montreal writers whose work he admires, but he is more inclined to position his own writing in a broader tradition of African American and Caribbean poetry. Kamau Brathwaite and Harryette Mullen are among his favourite writers, and the label word-sound systemizer comes from Jamaican dub poetry. He also feels a kinship with Laferrière: “he was an immigrant, living here, and a writer, and I kind of identify with that. I’m not from Quebec, but also part of my family is not from Canada either. So I feel like I’m an outsider here writing within and about this culture, and he was in a similar position.”

The many voices of the outsider are central to Accordéon. This finds its clearest expression in recurring stories about the flying canoe, which Kellough represents as an Indigenous technology and a decolonial space, rather than beholden to Quebec mythology. The numerous canoe trips – diverse collections of people paddling up and over the moon – include some of the most lyrical writing in the book. Importantly, the canoe also confounds the annotators from the Ministry of Culture. Whereas we’re told “one of the main functions of the Ministry is to maintain a hierarchy among narratives,” in Kellough’s version of the canoe, “all stories are equal.” “The flying canoe baffles them,” Kellough tells me. “They lose their proprietary hold over Quebecois culture.”

Kellough’s vision of the canoe is embodied by Accordéon. It is a remarkable work of experimental fiction that pushes back against those who would forward a singular narrative of this unabashedly contradictory city, celebrating instead the messy multiplicity of Montreal.

Sara Spike, PhD, is a cultural historian of rural and coastal environments in Canada.