After Realism: 24 Stories for the 21st Century

A review of After Realism by André Forget, editor

After Realism: 24 Stories for the 21st Century curates a collection of short fiction, untethered from reality and from realist modes of storytelling. In the introduction to the anthology, editor André Forget states that these stories constitute “a collective attempt to grapple with a tradition dominated by the realist short story [which] depicts the world as we know it in terms we are broadly familiar with.” He suggests that realism has become compulsory for young Canadian writers – crowding out stories and forms of storytelling which meaningfully represent frenzy, flight, delusion, and fantasy. This anthology departs from reality in a multitude of ways, offering stories of disorientation, stories of escape, and stories of other worlds.

Stories of disorientation, such as Casey Plett’s “Portland, Oregon,” are concerned with the swiftness with which a person may lose control of their surroundings. Adrienne, a young woman who lives alone in a basement apartment (with her talking cat Glenn), becomes sick with exhaustion as she juggles her day job with her work as an escort. The reader’s anxiety builds as we witness Adrienne losing her sense of time and scrambling to care for herself, her apartment, and her cat. There is a quiet devastation to Adrienne’s unravelling mind, to the way that she is swept up by all the moving parts of her life. In “Portland, Oregon” and other stories of disorientation, the reader never fully knows why the characters end up in these situations and why they act the way that they do. What is striking is the sense that perhaps these characters themselves don’t know either. 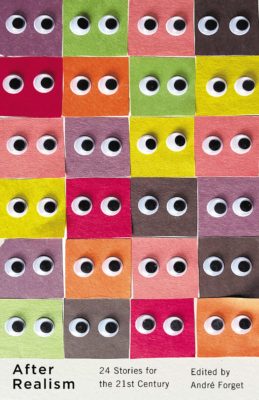 After Realism
24 Stories for the 21st Century
André Forget, editor

Meanwhile, David Huebert’s “Chemical Valley” is one of the short stories in After Realism that represent moments of escape. The protagonist of “Chemical Valley,” a middle-aged man working in an energy plant in Sarnia, finds reprieve in the corn fields he drives through every day. At one point, he daydreams about being chopped into pieces by the blades of a wind turbine and scattered over the fields, “blending with the earth and the soil, becoming vegetable, becoming corn.” These stories indulge a desire to retreat – into the sea, into the land, into the past or the future – and, in doing so, they ask us to reconsider how committed we are to our worldly obligations.

The anthology also contains stories set in other worlds. However, these stories are not vehicles for an obvious ethical message; they do not offer us a clear-cut warning or solutions to our contemporary predicaments. In Camilla Grudova’s “Madame Flora,” a narrative with few temporal or locational markers, women and girls who cannot menstruate are sent to a sanatorium. There, some of the girls realize that they can induce their periods by drinking the blood of men from the nearby town. Men willingly participate despite the risk to their lives, making these vampiric acts transactional. These stories are about encounters with the sublime – that which is beautiful, terrifying, and fundamentally other.

After Realism does not disavow so-called “real life.” In fact, many of the stories are marked by a strong sense of place, as they delineate the texture of various towns and cities in Canada. We may feel a jolt of recognition as we read the names of specific neighbourhoods and streets, of the daily occurrences that make these places charming or unbearable. It may be more appropriate to say that, in this anthology, familiar scenes are often made strange. One of the most significant ways that these stories oppose the realist tradition is by constructing characters who are truly inscrutable. It becomes difficult to disentangle their perceptions from their thoughts, their thoughts from their feelings. And it becomes difficult to understand whether they are estranged from the world or reaching towards new possibilities.mRb

Aishwarya Singh is a writer, researcher, and recent M.A. graduate of McGill’s Department of English. She lives in Montreal.