A review of Aki-Wayn-zih by Eli Baxter

In Aki-wayn-zih, Eli Baxter describes memories of growing up on traditional lands in Treaty 9 territory. He discusses his Anishinaabay life and childhood experiences there, and the repercussions of residential schools on him, his family, and members of his community. The book is divided into three parts: the first part is titled “Anishinaabay Kih-kayn-daa-soh-win (Anishinaabay Knowledge)”; the second is “Ish-poh too-kin-nih-goh-yung (Before contact)”; and the third is “Residential school.” Notably, the first two sections are titled in Anishinaabaymowin, the Anishinaabay language, and thereby privilege its knowledge, whereas the third section is titled in English only, evidence of the impact of residential schools.

The collection yet opens with Baxter’s disconcerting request as a child to attend residential school, a desire that will be reiterated in part two. His request was at once an innocent expression of his desire to be with his siblings and evidence that he had been separated from them. In contrast with that opening anecdote, part one of the book is more generally rooted in Anishinaabay Knowledges (Baxter’s usage, which he asserts is the correct one) – about, for example, Na-na-boo-zhoo (the spirit who used to live with that nation), ceremonial names they should have been received but were denied through processes of colonization, and the various Anishinaabay clans. 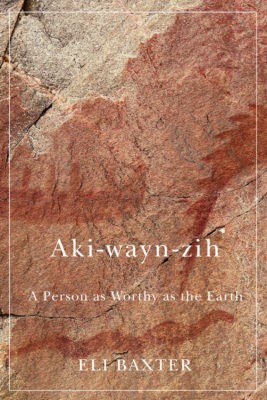 In the second chapter, “O-way nih-ta-tih-bah-chi-moh-win-naan (Our story),” he explains how each clan had its own storytellers, esteemed for their diplomacy when they delivered important messages. Baxter also explains how their language embodies their teachings and laws, which flourished on Turtle Island before European contact and supersedes European law. By the third chapter, “Pi-mah-tis-sih-win (The stages of life),” he elucidates the different phases through which children must pass to enter into adulthood and the community proper. This section concludes with his own birth and membership in his community and the urgent message that “we” – the Anishinaabayg – “are now in one of the greatest battles within ourselves.” That battle, he asserts, is the recovery of the language.

The second part extends and weaves Anishinaabay Knowledges with Baxter’s personal recollections of his young life with his family and community. He invokes spiritual teachings, philosophical ideas, and historical narratives as he also recounts his experiences related to trapping (beaver, muskrat, lynx), hunting (moonz-oog or moose), portaging, and fishing with his family. Of particular interest are the moments his parents narrated stories that were integral to his and, more largely, Anishinaabay identity. He describes how the trickster, Weeshakayjaak, and the evil spirit, Wendigo, were used both to amuse and instruct children. The warmth, humour, and intimacy of these stories serve as a contrast to the residential school narratives that follow in the third part.

These narratives are not as harrowing or traumatic as some other stories in circulation; however, they make it clear that residential school was a disruptive force, occasioning profound loss that was engendered by being separated from one’s family. Instead of speaking their own language, he and other children had to express themselves in English; instead of listening to traditional stories, they watched CBC’s Hockey Night in Canada or Bonanza. While there were the comforts of electricity and technology at the residential school, none of these compensated for returning home: “It did not matter if we were sleeping on the ground with just our blankets under the canvas tent. We were with our family again.” These stories are elegant and simple, and therefore accessible, sometimes repeating elements that suggest both their roots in oral narration and their importance as a resource in the building and restoring of Anishinaabay Knowledges.mRb