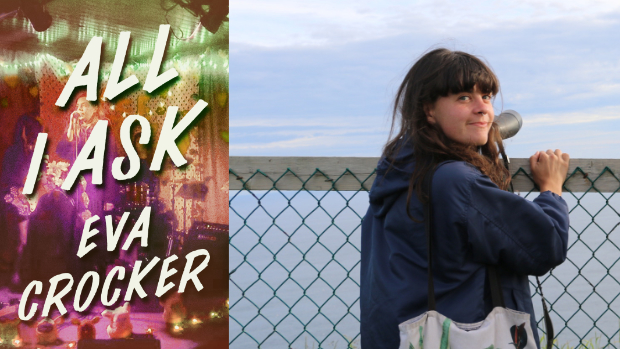 Eva Crocker’s debut novel, which was longlisted for the Giller Prize, originated as a script for a playwriting class. All I Ask is a carefully crafted, observant novel, whose dialogue and scene composition retain an intimacy and immediacy that hint at its theatrical origins.

Although the story opens with a dramatic scene – Stacey, the protagonist, wakes up to the police banging on her door with a search warrant and vague references to “illegal digital material” – the novel is decidedly not a thriller, nor a tidy whodunit. Instead, Crocker chooses a subtler approach to contending with police violence and surveillance, by focussing on the aftermath of the state’s invasion of Stacey’s privacy, and the ways in which her reactions to that invasion affect her close relationships. I speak with Crocker over Zoom on a fall afternoon, even though we live near each other in Montreal, which is either an odd or a fitting way to discuss a book that is so concerned with issues of online privacy and the paranoia that can result from considering the implications of one’s digital footprint.

Stacey’s story is set in St. John’s circa 2017, against a backdrop of growing public distrust of the Royal Newfoundland Constabulary (RNC), as well as the ongoing Indigenous-led resistance against the Muskrat Falls megadam project in Labrador, and increasing austerity measures by Newfoundland’s Liberals. Crocker tells me that she set out to capture the mixture of bleakness and community resurgence that characterized that moment in time.

The Liberal government had implemented all these austerity measures that were obviously impacting vulnerable people more than everyone else. There was a feeling of despair, but also a historic coming together, because there were all these protests happening, people trying to figure out how to respond to everything.

Crocker makes sure to clarify that Stacey’s experience of police surveillance and disruption is mild, as a white cis-gendered woman, compared to what Indigenous land protectors in Newfoundland and Labrador have to contend with. However, having had a similar experience herself, she knows all too well how disturbing this kind of interaction with the cops can be. “It made me think a lot about what it feels like when you don’t have power over what you reveal to other people about yourself,” she says. “I’m a pretty private person generally – not that that makes a difference! I don’t think anyone wants their private world pried into.”

… she set out to capture the mixture of bleakness and community resurgence that characterized that moment in time.

There is an interplay throughout the narrative between Stacey’s anxiety at what is being revealed to the police via her hard drive and internet activity, and her own choices to reveal herself within her personal relationships. The apartment the cops show up to has only recently become her home; previously, she lived in a house with Viv, her long-time best friend, and Viv’s partner, Mike. Viv and Mike’s decision to find a place by themselves prompts Stacey to move in with Holly, who is new in town, and not someone Stacey is particularly close with. Stacey grapples with feelings of loneliness and dislocation without Viv as her reliable roommate: “I was mourning all the systems Viv and I had developed […] A psychic connection that let us know when we could wander into each other’s bedrooms and when one of us wanted to be alone.” 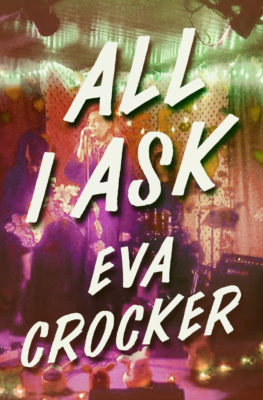 All I Ask
Eva Crocker

In the aftermath of the police sweep, untethered without her phone or her laptop, Stacey’s stress bleeds into her tentative relationship with Holly. Tension and mistrust build between them, growing harder and harder to address, even as they continue, more or less, to live together. Stacey is so nervous in the apartment that she stops preparing food for herself: “The thought of chopping up the vegetables with my back to the door was so unpleasant that I left the groceries on the counter and went to bed without eating.” Viv is still available as a friend, but, busy with her own life, she’s difficult to pin down. When Stacey finds a love interest in Kris, a charming queer about town, both the narrative and Stacey’s life are refreshingly energized.

Stacey’s relationship with Kris gives her some welcome distraction from her predicament, and also allows her to explore new, overtly consensual ways to build a romantic/sexual dynamic, in contrast to murky sexual experiences she has had before, primarily with men. Those past experiences, told in flashbacks, dwell in that muddy area between non-consent and bad communication or bad faith. Looking back on certain encounters and relationships, Stacey wonders whether her consent was in fact violated. With Kris, Stacey gets to speak explicitly about what she wants. She can indicate her desires physically, while also taking Kris’s desires into account. “It’s also a love story,” Crocker reminds me. “It’s about choosing to reveal parts of yourself to people, how that can feel joyous and good when you’re in control of it.”

One of the settings in which Stacey and Kris explore their connection is sex. Crocker writes sex scenes the way she writes everything else – a scene in which Stacey and Kris take turns fucking each other with a newly purchased strap-on is grounded in the details of the exchange, both physical and verbal. It’s explicit, and matter of fact, and sweet, and sexy, all at once. Crocker describes her approach to the scene: “I wanted to try and show what consent looks like. Because a lot of the sex that Stacey has had wasn’t explicitly non-consensual but there have been moments where she wasn’t totally comfortable with what was happening, but went along with it. Here, without having the characters constantly ask about consent, it feels like both characters are responding to each other, and checking in, physically if not verbally.”

While many of the daily observations Crocker makes will be familiar to other city-dwelling queers, artists, low-wage workers, and punk-show goers, she also writes St. John’s with lovingly specific detail. Aside from the political context of the Muskrat Falls protests, we are introduced to the insides of apartments, particular street corners, show venues, diners, and convenience stores. She herself prefers writing that evokes a strong sense of place. “Even if it’s somewhere I’ve never been, I like reading work that’s specific like that,” she says. “Now I am trying to write about Montreal [having recently moved here], and I am finding it a bit challenging because I don’t know it as well as St. John’s, I don’t know what was here years earlier, those histories that were passed down through generations; but I think I can offer other insights, different than those of someone who has lived here their entire life.”

Crocker writes with attention to detail and an ear for conversation about topics that are hard to pin down without being didactic. She writes convincingly of the intersection of the personal and the political. There are moments in All I Ask where the narrative lags a little; some encounters lack tension, some scenes could gather more momentum in order for the moments of overt conflict, release, or joy to have greater impact. However, the novel is a deft, assured debut, and Montrealers should be excited to read what Crocker makes of our own layered, corrupt, scrappy city in her next work. mRb