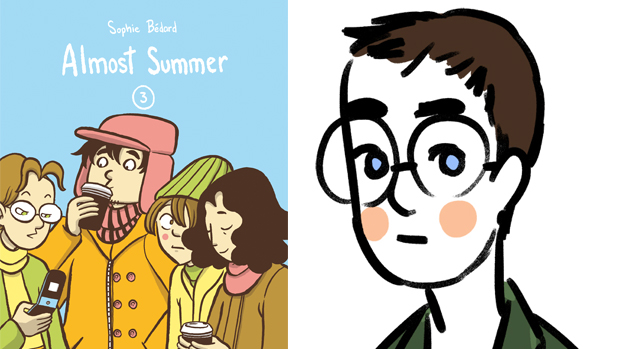 No More Pencils, No More Books

The third volume of Almost Summer follows the ups and downs of a gang of teens who are about to graduate from high school. With CEGEP just around the corner, the stakes are high. Emily’s mother wants her to study science, while Emily’s sidekick Michelle fails math but shrugs it off because she’s going to study early childhood education. Anthony thinks he’ll study social science to keep his options open, while Max hasn’t got a clue. He refuses to wear a mortarboard for his graduation photo because it would involve removing his beanie, and who knows what lies underneath! This year, Max is more interested in Noémie, who’s creating a wall-sized mandala and waffling over studying art.

The release of the English translation of this volume follows on the heels of the first two, published in 2017. The Almost Summer series is the work of comic artist Sophie Bédard, who, at the age of nineteen, did the unimaginable. Just a year after graduating from CEGEP, she published not one but two volumes of the now popular French-language series Glorieux printemps, which went on to be nominated for the Bédélys and Bédéis Causa awards, two prominent prizes for Quebec comic artists.

The author told me how she got started. “When I was a teen, I drew short strips of my daily life, my friends, school, etc. I published them on a blog so that my friends could see them and comment on them. That was also how I came across the work of other Quebec authors. Prior to that, I was familiar mainly with European comics,” says Bédard, who has also twice been nominated for the Joe Shuster Award for best webcomics creator.

The comic artist’s interest in sequential art intensified while studying graphic arts at the Cégep du Vieux Montréal. “At about seventeen, I developed a serious interest in making comics. I signed up for a comics workshop given by Jimmy Beaulieu and David Turgeon. As part of the workshop collective, I published a few strips for the first time, and then I concentrated on longer stories. I started working on Almost Summer right after CEGEP ended,” says Bédard. Incidentally, Glorieux printemps was picked up by Pow Pow even before she had finished inking it. 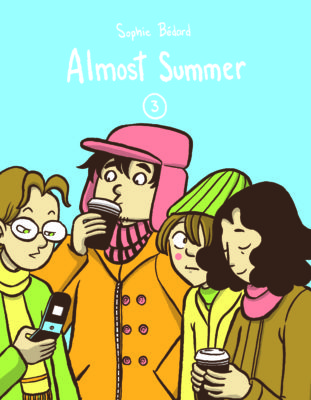 When asked about the change in seasons in the English translation of the title, Bédard says, “I didn’t like the ring of Glorious Spring in English. I liked Almost Summer because it evoked waiting, and during our teens, we sometimes have the impression that our life is on hold. Nothing moves very fast. We have plenty of interests and aspirations, but we’re hemmed in by the fact that we’re still just kids.” Kids who were inspired by fellow students: “I think that there’s a lot of me in each of the characters,” Bédard explains, “but also quite a bit of people I hung out with in high school, so a happy blend of both. But if I had to choose a character who is most like me, it would definitely be Emily. I like to say that I’m Emily in my everyday life, but I become Michelle after I’ve had a few drinks.” As for the setting of the series, “It takes place in La Prairie, right where I grew up. The characters go to the same high school I attended, La Magdeleine,” says Bédard. (Don’t be surprised, when you pick up a copy, if you recognize places like the DIX30 or parts of the South Shore.)

The two main characters in Almost Summer couldn’t be more different. Emily is a serious student with a strict mother (“No phone calls after7:30 pm”), while Michelle (a.k.a. Mimi) is impulsive, melodramatic, and silly. Nevertheless, Emily and Michelle complement each other. Emily needs Michelle to bring some fun into her life, while Michelle needs Emily to keep her in line and do some studying. Anthony lives with his grandmother, and he actively pursues Emily, regardless of how many times she bluntly rebuffs him. He’s been friend-zoned. They both work part-time at the same flower shop, and it’s particularly funny when Anthony sweeps up, singing “I love the flower girl,” much to Emily’s annoyance.

Unlike in the first two volumes, some seriousness and maturity creep into the themes of the third. Anthony asks Emily to go for a walk with him to visit his mother’s grave, while Max finally removes his beanie and buys some much-needed shampoo. Emily begins to think for herself about her future rather than just obeying her mother, and Michelle finally has a chance with her “soulmate.” The dialogue is perhaps the best feature of Almost Summer, particularly the third volume. It’s funny and accurately depicts how teens talk to each other, with Emily and Michelle delivering the best quips. The teen reader will find the characters’ situations and reactions both realistic and entertaining.

Although there is little for the gang to do in their suburb, there is still plenty of action, and the story moves forward at a brisk pace. Bédard’s drawings are compelling and have strong, clean lines throughout. What is more, one cannot help noticing that the characters’ expressive eyes, especially Michelle’s, have a strong manga feel. “I was really inspired by manga authors, such as Ai Yazawa, Kyoko Okazaki, and Kiriko Nananan, particularly in terms of their pacing and focus on the feelings and silent moments of their characters,” says Bédard.

As many young readers will become attached to the characters, I was curious about what comes next in the series. “In the fourth volume, the story focuses on the family problems of Emily and Anthony, about growing up in a less than perfect family and about learning to stand up to their parents. And because it’s the last volume, it’s also the time to say good-bye to high school,” says Bédard about the final volume of Almost Summer, whose release date has not yet been set.

Sophie Bédard has recently finished a university degree in sexology. She hopes one day to be able to combine comics and her field of study. How she will do this still remains a question. The comic artist is currently working on her fifth book, a graphic novel about young adult women, which will also be published by Pow Pow Press. Ideally, she hopes to complete this book some time in the fall. Until then, all her other projects are on hold. Bédard has had quite a successful run, especially considering she has yet to celebrate her twenty- seventh birthday. mRb