A review of ALT•4•1 by Michael Occhionero

Michael Occhionero’s ALT•4•1 is an existentialist, dystopian science fiction novel that ponders the fate of humanity under corporate hegemony. From the depths of a darkened bunker, our narrator Beall recounts his desperate, last-ditch effort for survival. The enemy: an advanced artificial intelligence that would make today’s most complex deep learning databases look cute. Imagine an app so responsive and adapted to each human that it could predict an individual’s every physical and emotional desire. This is the function of ALT•4•1’s antagonist, a software called Intelliware.

Those integrated into the Intelliware system are called Users. Non-Users, like Beall, don’t belong to the same society. They are poor and sodden outcasts, living off the land and avoiding Users at all costs. There’s nothing for non-Users to participate in: under Poplar Corp’s Intelliware, every transaction is determined in-app. Poplar Corp’s ultimate goal is progress: something that can only be achieved by the pure and total commodification (and datafication) of human behaviour. 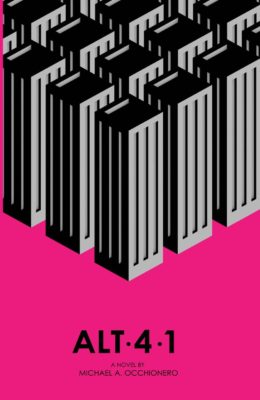 The first quarter of the book sets us up with this concept of Intelliware and Poplar Corp; how Earth’s cities are now all numbered iterations of Metropolis, populated and powered only by Users. Lead software designer Dr. Mulligan has absconded to Beall’s settlement, bringing with him the final software update – called ALT•4•1 – that will “complete” Intelliware. Dr. Mulligan, with the cooperation of Beall, the inadvertent leader of this non-User colony by the bay, convinces his fellow non-Users that his plan – to retreat to a bunker and dig under Metropolis 1 to disable the server – is the only way out.

Thematically, ALT•4•1 tips its hat to the 70s science fiction classic The Inverted World by Christopher Priest. Also, a reference can be inferred to the cities’ namesake Metropolis, Fritz Lang’s iconic film in which an unseen, unkempt, underground community fuels the glossy Metropolis above.

Perhaps the simple nature of the settlers, or non-Users, could have been developed more. The story opens by focusing hard on the futuristic advances of Intelliware and Poplar Corp – all explained in quite advanced terms. The data dump overrides Beall’s narrative voice, and the primitive nature of the settler society is not obvious. They are an agrarian community where men are the leaders. Men are strong and while women try their best, they are relegated to a role of servitude to the men, providing comfort, cooking, cleaning, and reproductive services.

It is both rare and refreshing for a new publisher to emerge on the English Montreal indie scene, especially one capable of launching several titles across poetry and fiction from a variety of genres. But AOS Publishing reveals its growing pains through some unique choices on an editorial level: a consistent yet unconventional use of the en dash, left justified margins (which perhaps have been implemented as a publishing style), and the uncredited commercial use of copyrighted material (don’t tell Neil Young’s music publisher).

ALT•4•1 is structured as Beall’s recount of his conversations with Dr. Mulligan. It’s how we learn about the devastating effects of climate change and depleted resources, and philosophically about how humanity is limited by our emotions and frivolity. These problems are what lead to the creation of Intelliware. At the two-thirds point the book is dense with this type of philosophical expansion, and the back-and-forth between Beall and Dr. Mulligan is as thick as the gritty, humid air of their bunker.

In the book’s most meta moment, Beall himself remarks: “Dr. Mulligan was working himself into one of his rhetorical monologues again, but I could hardly listen.”mRb