A review of Late-Life Homelessness by Amanda Grenier

Most people would presume being homeless in late life is hard. They may not, however, have reflected on how people might experience that hardness as continually accumulating suffering. Few know how unhoused people also live with the persistent threat of violence, including sexual violence: living without a home is characterized by continuous fear. Older homeless people are weaker, sicker, less mobile, and more vulnerable; they fear violence and predation as much as anyone on the street. Yet living unhoused is marked by many emotions beyond fear, notably exclusion, stigmatization, grief, loneliness, disappointment, and anger. 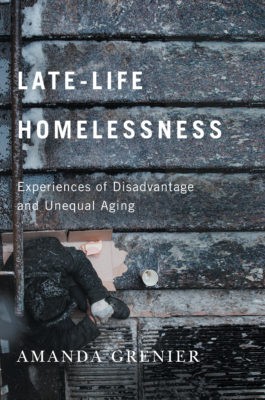 These are key takeaways from University of Toronto gerontological social work professor Amanda Grenier’s Late-Life Homelessness: Experiences of Disadvantage and Unequal Aging, the product of ten years of Grenier’s work researching the experiences of older (aged 50+) unhoused people in Montreal, particularly around the Old Brewery Mission and its services.

The most striking takeaway from Grenier’s work is her reframing of late-life homelessness as a phenomenon generated by what she calls “disadvantage over time.” Rejecting the framing of poverty as a failure of individual responsibility, Grenier instead suggests understanding late-life homelessness as the product of a series of failed systems beginning in early life that gradually both exclude and expel older people without homes from access to services, and from the human community as a whole.

Grenier’s book is full of examples of systemic failure: homeless shelters (which residents find fraught with violence, theft, fear, and uncertainty) offering no beds for people with reduced mobility or paralysis, and little care for sick and dying elders. Long-term care facilities, which have become ad-hoc stopgap housing for some older unhoused people, treating residents who were homeless with high-handed contempt. A whole system of state-level approaches to serving older people designed to allow them to “age in place” at “home” – ignoring the existence of those without homes or a safe place in which to age, let alone a family or community with whom they can grow old.

Systems designed for dealing with homelessness have systemically overlooked older members of the community of poverty in favour of programs for younger people and young families. Organizations are hard to blame: their funding has been gutted over four decades of successive governments embracing neoliberal economics, under which taxpayer dollars must be saved above all through cuts to social programs and a reframing of the social safety net as the responsibility of private citizens.

For this to change, Grenier argues, governments must embrace the more expensive approach of treating homelessness as an ongoing state of injustice, requiring significant change at every policy level. She ends her book with detailed suggestions of how this might occur, identifying and addressing structural barriers that exclude and harm older homeless people. Above all, she calls for policies that recognize unhoused people as victims of failed economic, political, and social policies.

These are important arguments, built on a book of critically important research. It is to the book’s detriment, then, that it is so hard to read. Nothing about the arguments Grenier makes is especially hard to follow. To her credit, she avoids buzzwords and jargon in favour of a plainspoken just-the-facts style.

Yet that style works against the reader: Grenier’s prose ranges from flat to deadening, a problem she accentuates with frequent and unnecessary use of both passive voice and unnecessary repetition. Every chapter teems with lengthy parallel-structure lists of detailed statements – often stated passively – which become overwhelming to read. These lists would be so much easier to digest in bullet-point form. There really isn’t a good reason why a book this important should be discouragingly boring to read, particularly given Grenier’s vocabulary is accessible and her conclusions are clear and hard to argue with.

Yet Late-Life Homelessness makes a strong argument for encouraging academic writers to adopt some literary voice, if only to make their data and arguments engaging enough to attract readers beyond scholars of homelessness and critical gerontology. The information in Late-Life Homelessness is of the utmost importance, and should be shared with as many people as possible. The moral heft of its contents calls out for a more eloquent and engaging presentation that would bring to the book the wide readership these heartbreaking findings deserve.mRb

J. B. Staniforth has spent more than a decade serving youth on the street in Hochelaga-Maisonneuve and downtown Montreal as a frontline-outreach volunteer with the organization Dans La Rue. He is a reporter, writer, and teacher.