A review of Amerika by Réal Godbout

Franz Kafka’s unfinished novel Amerika begins with a striking, factually inaccurate description of the Statue of Liberty: “The arm with the sword rose up as if newly stretched aloft, and round the figure blew the free winds of heaven.” Réal Godbout’s graphic novel adaptation opens with a perfectly menacing, blade- wielding Lady Liberty, capturing from the very first frame how Kafka got America wrong, but in so doing, got Amerika right.

Amerika is in capable hands (and a good thing, too, since Kafka wrote it without ever having seen this side of the Atlantic). Godbout, a seasoned graphic novelist, has produced a faithful adaptation of the posthumous novel that follows teenaged Karl Rossmann as he tries to make something of himself in the United States after being sent away from Prague for having impregnated his parents’ 35-year-old housekeeper. The book features crisp and meticulously detailed black-and-white illustrations, and the whimsical, comedic, and occasionally surreal moments of the original story are particularly well served by the graphic novel form, making some scenes feel foreordained for a visual medium. 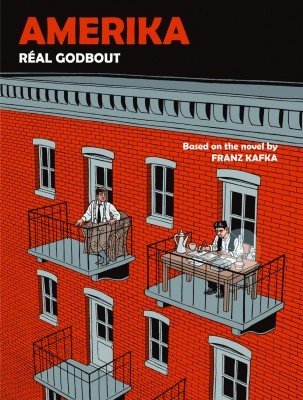 Karl’s adventure begins on an implausibly fortuitous note – a wealthy, American, and heretofore unknown uncle adopts him before he can even disembark the ocean liner – but his fortunes (literal and figurative) dwindle with each chapter. Amerika is a series of loosely related events that happen to Karl, yet he throws himself into each new scenario with the vehemence of someone who has carefully charted his own course. As it happens, nearly all the characters find themselves suddenly and swiftly overcome by feeling: a hatred of their interlocutor, for instance, or the necessity of hatching an escape plan. If readers are left feeling jilted and jostled by this abruptness, it would be a mistake to blame the graphic novel format. Indeed, this is the pace of the original, and the rapidity with which stark changes occur is, in a sense, what makes Amerika well suited to the graphic novel.

Replicating the rhythm of Kafka’s Amerika is, nonetheless, the greatest challenge Godbout faces. His Amerika is condensed, skimming over some of Kafka’s perplexingly long descriptions or conversations, which helps readability but sacrifices some of their peculiarity in the process.

Godbout’s adaptation was first written and drawn in French (translated from the original German), meaning that this English translation is not one, but two, steps removed from the original text. Fortunately, aside from the appearance of a handful of anachronistic curse words in one scene, there was only one segment where the story suffered as a result. In the final chapter, Karl seeks out employment at the Grand Nature Theater of Oklahoma and is reunited with an acquaintance who makes her living as part of a chorus of trumpet-blowing angels. She encourages him to present his candidacy to the theatre, and upon being hired he tries to find her again only to be told that the travelling musicians had gone on to the next town. Karl responds, “Too bad. One of the angels is a friend of mine…” In the 1946 English translation, however, Karl responds, “I had a friend among the angels.” Fortune and misfortune strike our protagonist with simultaneous blows, but there is a subtle serendipity that follows him, too. The Grand Nature Theater of Oklahoma seems too good to be true: will Karl finally find his place in America? Or is he bound to meet some truly unsavoury ending, traipsing foolishly into the theatre, a Pinocchio lured into Stromboli’s nefarious playland? Amerika is a light affair by Kafka’s standards, and his long-time friend and literary executor Max Brod maintained that Kafka intended it to end on a “note of reconciliation.”

We don’t know what the future holds for Karl Rossman, but – and I suspect Réal Godbout agrees – we can rest assured that he, at the least, has a friend among the angels. mRb