An Illustrated History of Quebec

A review of An Illustrated History of Quebec by Peter Gossage and J. I. Little

Fortunately, here is a book that straightens it all out. This Illustrated History of Quebec, by a pair of history professors, Peter Gossage of Concordia University and J. I. Little of Simon Fraser, recounts what’s been happening in this patch of North America from ancient times to the present. The emphasis is on French Quebec, from the explorers to the Péquistes, and in particular, on the eternal conflict (as the subtitle indicates) – always a passionate struggle in Quebec – between the comfort of tradition and the call of modernity. 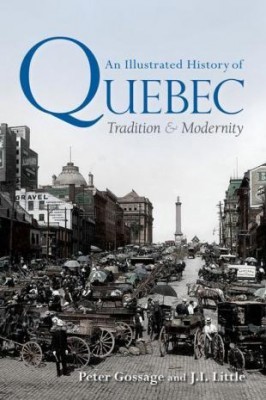 An Illustrated History of Quebec
Tradition & Modernity
Peter Gossage and J. I. Little

This is not so much a history of lives or lifestyles. There is less about individual people than the movements that grew up within the society. There is discussion on government policies, on the responses to outside forces (Conquest and Confederation, among many others), and on the powerful influence, for four centuries, of the Roman Catholic Church.

I feared at first I was becoming submerged by facts, this at the expense of the sweep of history. But I was won over by the authors’ approach: all the details add up to a well-rounded portrait. Besides, facts can be so compelling:

The facts are well organized, with chapters on the fur trade – as many as a quarter of canadien men in colonial times went west as voyageurs – on the early military, on liberalism and nationalism, on towns and cities, on the “darkness” of the 1940s and ’50s and the bright lights of the 1960s, on the rise (and staying power) of sovereignty.

There are occasional loose ends. The authors nonchalantly drop the intriguing idea that a Patriote victory in 1837 “would very likely have resulted in union with the United States” without further elucidation. And while it’s noted that Quebecers of the 1920s supported French-Canadian communities outside Quebec, there’s no mention of the dismissive or hostile attitudes of more recent Quebec nationalists, Réne Lévesque labelling those communities “dead ducks,” or Robert Bourassa sending his lawyers to Alberta to argue against French-language school boards.

More jarring, in a book otherwise so at ease with facts, are a couple of instances where opinions appear to be presented as facts, “that Confederation was a bad deal for French Canadians,” for one, and a description of Pierre Trudeau as “the leader of the forces of federal oppression.” Let’s assume these were instances of careless writing and editing.

But overall, as a reference on the history of Quebec, this book is reliable and thorough; a handy handbook on the forces of tradition and modernity. mRb