And Miles to Go Before I Sleep

Not all those who wander are lost… but how does one tell the difference? When does a break for freedom become indiscernible from abandonment? How well can we ever understand the motivations of another? These are some of the questions richly evoked in Jocelyne Saucier’s newest novel: part mystery, part love letter to remote Canadian towns, and part meditation on writing and storytelling.

The novel is narrated by an unnamed man, acting as an amateur detective to reconstruct a strange story that at first seems to be about “an old woman [who] dies because they took away her train.” In 2012, in the small town where she has lived for decades, Gladys Comeau boards the Northlander train to begin a journey “on the trains of Northern Ontario and Quebec, which take her south, then west, then east, then back north.” Gladys is elderly, and for years has served as the caretaker for her adult daughter, Lisana, who struggles with addiction, mental illness, and suicidal ideation. Gladys’s departure sends shock waves through her networks of family and friends, as no one can understand where she is going or why she left. As a friend laments: “She abandoned her daughter to her suicidal compulsions to traipse around on trains with a stranger. It was outrageous, vile, absolutely shameful in a mother.”

The narrator retraces Gladys’s steps to reveal how her journey gradually draws both strangers and friends into her orbit. Her travels culminate in a wide-ranging cast of characters, including the narrator himself, coming together in another remote town for the climax of Gladys’s story. Deftly and surprisingly, Saucier then diverts the plot into a final, deeply metafictional section focusing on the narrator’s struggles to capture Gladys’s story for posterity. Unlike the elderly woman who chose bold action even at a high cost, the narrator finds himself virtually paralyzed by “a story that takes off in every direction. Too many facts gathered, too many anecdotes collected, too much of everything. A massive forest to clear.” 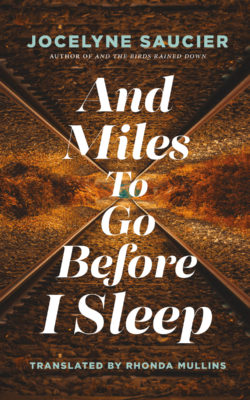 Travel by train is the impetus for the plot, but can also serve as an analogy for the style of the writing: un- adorned, seemingly unhurried, and yet relentlessly moving forward. Details such as Gladys’s history growing up on “school trains” (mobile schools that travelled between remote communities) and a subplot about a Parisian novelist are used purposefully to create an almost Dickensian texture of interconnections and suspense. The depiction of Gladys as an indefatigably hopeful person, fond of saying, “When you have known happiness, it’s impossible to believe that it’s no longer possible,” also transforms the story from one of loss to one of finding new meaning.

Some readers might find the introduction of new plotlines and a different tone in the final section to be jarring, but I ultimately found it a refreshing way to add complexity and avoid sentimentality. I also deeply appreciated the ambivalent and inconclusive ending. More than anything else, this is a novel about stories, and how we tell them when we have only fragments and pieces. When the narrator comments on the complexity of his task, he says wryly, “If one day there are readers for this story, may they forgive me the mess.” Whatever mess there might be in this novel is easy to forgive for the sake of something truly rare. I side with the narrator, who eventually comes to conclude: “As for me, I’ve accepted the confusion and haze. There is too much to lose trying to explain everything.”mRb