The Two-Headed Balm of Greek Tragedy

A review of Antigone Undone by Will Aitken

Will Aitken does something remarkable in his new book: he brings together a keen critical eye and an open heart, and – in doing so – creates a unique hybrid of critical essay and memoir. And though Aitken begins with strong material – a classic play in a new translation by a major poet, staged by a renowned actor and director – it’s what he does with the material that is most striking.

Antigone Undone’s occasion is a 2015 invitation from Anne Carson for Aitken to travel to Luxembourg and observe the rehearsal and first night of the stage version of her new translation of Sophokles’s Antigone. Unsurprisingly, Aitken accepts, and he captures the experience with nuance and insight. The author is particularly sharp on fine points of performance and staging; his experience as a film writer shows in his precision. He notes, for example, the way the face of a great actor is a “palimpsest” in which one watches a performance through the layers of past performances still living in memory, and brings forward meaningful details such as the moment the actor playing Kreon pulls his suit jacket over his head during a crisis point. However, it is his sensitivity not so much to the techniques of art, but to its effects that lend the account power. That sensitivity makes the book more than cultural journalism; it turns it into a quest to understand the way the human heart makes meaning out of trauma. 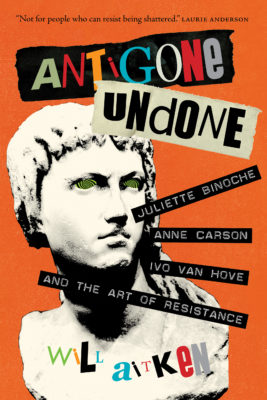 Following the performance, the author heads to Amsterdam for some holiday time and finds his memories of the show pulling him toward depression. He considers how the victimization of the less powerful by the more so rushes on unabated, even two and a half millennia after Sophokles imagined the tragedy of Oedipus’s daughter. So deep does this depression become that thoughts of suicide haunt him while he struggles with the play’s impact, and through it, the impact of a world still filled with suffering. Working through these feelings, the author parses Carson’s translation and pages through considerations of the play by writers and philosophers as diverse as Hegel and Virginia Woolf, Judith Butler and Kierkegaard in later sections of the book. His touch here is light, and readers with both more and less interest in philosophy will find something compelling in watching the search for meaning unfold.

So, Antigone Undone has great strengths – and many of them – but no book is free of issues. Here they are largely structural in nature, or involve shifts in tone which sometimes disrupt the emotional power that keeps one reading. But Aitken’s sentences always shine. His command of cultural history and language, and his psychological honesty, are unwavering. This moment near the book’s close demonstrates it:

[a] terrible sadness comes on slow. A different kind of sadness from what I felt eight months ago in Luxembourg. Not overwhelming but simply intrinsic to this little world onstage and to the larger one beyond it. The melancholy of having lived, the irreparability of the world.

In the end, it is the book’s rigorous gaze, both knowing and so knowledgeable, along with its vulnerability, that compels us while simultaneously pointing out how timely Antigone is, how relevant its message is now, and how any simple parallel or easy summary, even this one, still needs to be questioned, still needs to be rethought and made anew. That is no small thing, because it reminds us of what much critical writing neglects: the way in which there is something in art, despite its limitations, that one still turns to when one faces troubles. And everyone, sooner or later, does. mRb