A review of Apple S by Éric Plamondon

What is most striking about Apple S – and the entire 1984 Trilogy, of which it is the final instalment – is its form. It’s written as a series of short chapters, some of which concern the novel’s main topic (Steve Jobs), as well as other figures and historical moments (George Orwell, Alan Turing, René Magritte, the formation of Silicon Valley, etc.), while others document the life of Gabriel Rivages, a stand-in and alter ego for the author. Steve Jobs is ostensibly the main through line, but, at the same time, that’s not always present, since he is given less space than all of the other through lines put together. Each chapter, beginning with a new topic, resembles a standalone poetic or narrative essay, often with a twist in the last sentence.

All of this has a tendency to keep matters mostly on the surface, which is perhaps a criticism. However, keeping things on the surface is the trilogy’s greatest strength, as it gives the writing an intensely contemporary feel, echoing our daily habits of Wikipedia and Google searches. Connections might be made simply because things happen in the same year, information easily gathered online, and this playful approach to history feels almost too much like how we live and understand the world of today. This freedom to effortlessly jump from topic to topic also leaves the reader open to occasionally being blindsided by sudden surges of thematic depth or heartfelt sentimentality (the latter mostly when Rivages writes of the joys and pains of fatherhood). Everything is on the surface – until suddenly it’s not. 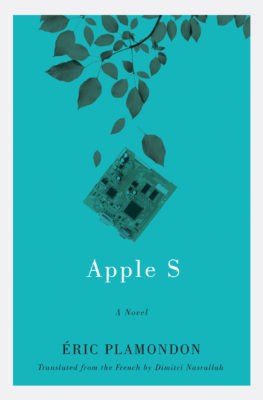 Apple S has lightly worn thesis (spoiler alert): that we give our lives meaning by making them into stories. Like Steve Jobs inventing the personal computer in his parent’s garage and going on to become a billionaire, a “downright brilliant, almost mythological” story according to Rivages. There is this moment, one of many when the book becomes more critical of Jobs: “Steve promised us happiness that doesn’t call for anything other than ourselves. He liberates us from society. The computer is the perfect tool for this emancipation.” It might only be my own desire for more politics in literature, but I wanted so much more about what it means to believe it might be possible to be “liberated from society.” But then again, I’m not sure exactly what else it is I want and therefore think of the old adage “leave them wanting more,” which this book certainly does.

I thoroughly enjoyed reading the entire trilogy and was especially grateful for its rejection of most aspects of the conventional novel, but I also felt suspicious of an overarching cleverness that brushed against so many difficult questions, while at the same time brushing them off. Much like a Google search, this work gives us a great deal of information, and makes unexpected connections, while allowing the reader to do with it all as they may. I wonder if it’s an unfair criticism to say that, at least for me, this work fails to push hard enough in any particular direction, spreading out like the internet in all directions at once. Fair or unfair, this criticism is not of a shortcoming but of what the book has set out to achieve.

Toward the end, Apple S draws connections between sixties counterculture and the home computer revolution. This definitely made me reflect on the ways the internet has and has not fulfilled its promise. On the difference between IBM and Apple: “A closed computing system limits the possibilities of the user, but it is more stable and more predictable. An open system is a lot more fragile and less reliable, that’s the price of liberty.” This trilogy is nothing if not an open system. Writing that makes connections that are simultaneously slight and sharp, fragile and less than reliable, in some sort of direct rebuke to things (such as conventional literature) that claim to be reliable but so often let us down – which is why it feels so much like the literature of our time. mRb

Jacob Wren makes literature, performances, and exhibitions. His books include: Polyamorous Love Song, Rich and Poor and Authenticity Is a Feeling. As co-artistic director of the Montreal-based interdisciplinary group PME-ART he has co-created performances such as: Individualism Was A Mistake, The DJ Who Gave Too Much Information andEvery Song I’ve Ever Written. His internet presence is often defined by a fondness for quotations.