A review of April on Paris Street by Anna Dowdall

Just like the chocolate-covered marshmallow cookies eaten by private detective Ashley Smeeton throughout April on Paris Street, this novel is one of those guilty pleasures you sink into with abandon.

Early in the story, what is supposed to be a quick stint in Paris (to pick up the beautiful and elusive Mirabel Saint Cyr at the request of her controlling husband Charles) turns out to be so phantasmagoric it makes us wonder if Ashley will ever come back to our side of the pond. After a slew of wild parties, expensive shopping sprees, and dramatic escapes from dangerous characters who are all connected to fashion designer Raymond Boissier, Mirabel’s lover, both she and Ashley finally make it back to Montreal. And once here, Ashley continues the chase, bringing us to lesser-known or literally invented parts of Montreal (has Chickentown ever existed?), as she rides around in her decommissioned police Crown Victoria Interceptor with her seemingly oblivious client.

The plot loosely revolves around the fashion industry, its money, and stolen goods, but sometimes you get the feeling it’s simply a backdrop for character development. Mirabel’s complicated life, tightly entangled around her husband Charles’ and her sister Isabel’s lives, takes centre stage in this perpetually confounding case that seems to raise more questions than anything else. Ashley keeps getting hired, and paid ungodly amounts, to protect Mirabel, but from what or whom? And why does Isabel keep showing up to explain Mira’s quirky, unstable behaviour? Let’s just say that the lines become blurred as the novel progresses. 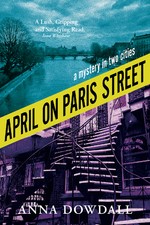 In this mixture of chick lit and detective novel, Dowdall keeps us interested with much more than the actual case Ashley is working on. Usually wanting in these types of genres is a fully formed main character, but not here. The length of the novel, at over 300 pages, is a clue to the importance the author places on the detective’s personal life and the more intimate side of her personality. Ashley’s newfound apartment/office in Pointe-Saint-Charles, on Paris Street, figures prominently in her private life, with friendly yet invasive neighbours, a gaggle of children and various strays in tow, who regularly drop by to grab a coffee, chit-chat, and eat Whippets.

We also learn about Ashley’s past with a family Christmas celebration at her mother’s house, in the small town of Waverley, “on the Abenaki River in the Eastern Townships,” a geographic location of Dowdall’s invention. Her further foray into Ashley’s connection to her Abenaki First Nation roots, through her estranged family on her deceased father’s side, is a delicate one, especially in light of how much of the novel’s geography is pure invention. This ambivalence is carried over into other aspects of the story. Even when her personal and professional lives collide (spoiler alert averted), neither side takes over completely. The problem with this is that, by the end of the novel, the dead ends really start to pile up, never to be resolved.

On a whole other front, this book is jam-packed with women characters, and how they keep escaping from downright nutty and dangerous situations at the hand of men. The male characters are, for the most part, stereotypical and either downright awful, complete pushovers, or quintessential good guys: Ashley’s client Charles Saint Cyr, the cold, older, and controlling rich husband who wants his wife back home “safe”; Raymond Boissier, the gorgeous underground Paris designer who got Mirabel into this dangerous mess in the first place; Roy Smeeton, Ashley’s kind but wishy-washy brother married to a pushy wife; even the Bortnik brothers, the big brutes who keep chasing Ashley and Mirabel everywhere, who get nicknamed “thug one” and “thug two.” But it is in the character of Jon Perez, Ashley’s fleeting (and questionable) love interest who pops in and out of Ashley’s life (at times too conveniently), that things seem a bit too prearranged, narratively speaking.

The ultimate plot twist comes at the end, of course, and is encapsulated in a complicated and truly messed-up family saga that explains some of the convoluted reactions and decisions made by the ethereal Mirabel and her down-to-earth sister, Isabel. April on Paris Street is definitely worth the read, and my curiosity has been piqued enough for me to want to nab Dowdall’s next book in the Ashley Smeeton series.mRb