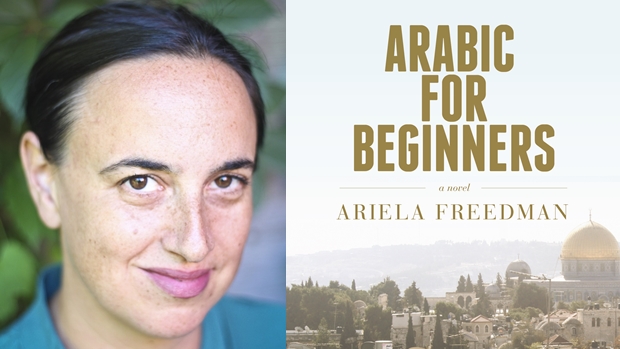 Ariela Freedman – Crossing the Line in the Sand

Israel has always been a complicated place. With the occupation of the Palestinian territories entering its fiftieth year and the most right-wing, racially divisive, and pro-settler government in Israeli history poised to retain power in the upcoming elections, it’s more complicated than ever.

Arabic for Beginners is Montreal writer and scholar Ariela Freedman’s attempt to explain some of these complexities. Which is not to say that she simplifies things. Her book is a nuanced and penetrating exploration of life in Israel today. Billed on its cover as a novel, Arabic for Beginners reads more like a memoir than fiction. But whatever the genre, it’s well worth reading.

Its genesis was a year Freedman spent with her young family on sabbatical in Jerusalem in 2008–2009. Freedman had visited Israel as a child and adolescent, but now, returning as an adult after a long absence, she found herself experiencing two versions of the country: the Israel of her youthful, idealizing imagination and the country actually before her. Contradictory feelings of intimacy and ambivalence, connection and distance, compelled her to sit down and write.

From the start, form was an issue. What kind of book could possibly contain all of the conflicting experiences, memories, and ideas assailing her? Freedman, who teaches modernist literature at Concordia University’s Liberal Arts College, took inspiration from Samuel Beckett. “He has this phrase I love about finding a shape to accommodate the mess,” she tells me over tea in a west-end Montreal café. 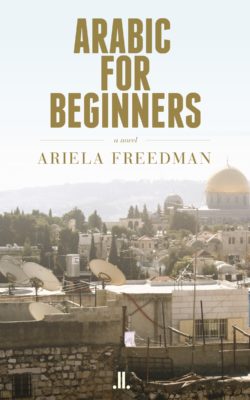 The shape she eventually found for her book is borderless, which is ironic given her subject matter: a country where lines in the sand are sacrosanct. Arabic for Beginners is part of the current literary trend of genre-crossing. “I read a lot of autofiction,” she explains, “writers like Karl Ove Knausgaard, Ben Lerner, Teju Cole, and Rachel Cusk, who shift between memoir and fiction and also incorporate other genres in their writing, like art criticism and travel literature. I wanted the plasticity of fiction, the ability to create composite characters, to shift timelines, to invent.”

At the centre of this shape-shifting fictional narrative is Hannah, a thirty-four-year-old PhD student from Montreal, who, in a slight twist of fact from the author’s own life, follows her professor-husband to Jerusalem, where he’s been invited to teach for the year. Hannah’s own career is on hold, sidelined by childbirth and motherhood.

She enrolls her youngest son in “The Peace Preschool,” an institution located in West Jerusalem that boasts Muslim and Jewish students and a bilingual Hebrew-Arabic curriculum. Hannah is Jewish. She speaks Hebrew but is keen to lear Palestinian Arabic and to have her sons learn it too. As it turns out, Arabic has been dropped from the curriculum. Not enough Arab children attend the school to warrant it, and the local Jewish and Christian families aren’t interested.

Hannah befriends one of the few Palestinian mothers at the school, Jenna al-Masri, ten years her junior with three children already in tow. Friendships between Arabs and Jews are rare, Hannah learns. She also learns why.

The first barrier is language. People aren’t offered the tools to communicate. After scouring the city, Hannah discovers that it is “oddly difficult to find beginner Arabic classes in Jerusalem.”

It turns out that Israel’s Jewish and Arab school systems are segregated. From a young age, Jews and Arabs are separated physically from each other. And within their separate schools, second-language training is low on the priority list. “A child growing up in West Jerusalem will learn only rudimentary Arabic,” Freedman says, “while one in East Jerusalem may not learn Hebrew at all.”

Soldiers in the Israeli army are required to learn a little Arabic. But what they learn isn’t exactly conducive to amicable relationships. Machsomite, it is called: “Checkpoint language.” Machsomite consists “only of commands,” Freedman writes. “‘Open your bag. Take the car seat out of the car. Step outside. Hands up.’”

The Arabic Hannah ends up studying, once she manages to locate a teacher, is a more inviting, poetic language than the one the soldiers speak. She delights in “the many modes of greeting: ‘good morning,’ ‘bright morning,’ ‘rose morning,’ ‘jasmine morning,’” and appreciates that “when someone fed you, you ‘blessed their hands.’”

“The kinds of encounters that people had enjoyed for more than a generation with their neighbours disappeared. … When the Wall was built, all these natural humanizing encounters ended.”

The second barrier separating Arabs from Jews is literal: a seven-hundred-kilometre wall running along the Green line in the West Bank. “The Wall was built to improve security,” Freedman explains, “and in certain ways it succeeded. But at a price. The kinds of encounters that people had enjoyed for more than a generation with their neighbours disappeared. There were all kinds of other really serious consequences to the Wall, but that was the one that concerned me. You couldn’t visit anymore. You couldn’t see people. When the Wall was built, all these natural humanizing encounters ended.”

Hannah’s movements are not curtailed the way those of an Israeli or a Palestinian would be. Thanks to a Canadian passport, she is able to explore cities in the West Bank like Bethlehem and Ramallah, and visit Jenna’s home in East Jerusalem. On these trips, she meets people, listens to their stories, and shares her own in faltering Arabic.

As the months go by, her friendship with Jenna deepens, despite the fact that she and Jenna have little in common except for motherhood. Relentlessly curious, hyper-educated, ironic Hannah sometimes wonders what she is doing with an uninstructed woman full of unexamined superstitions. And Jenna’s mothering style appalls her. Jenna routinely gives her kids Red Bull energy drink in their baby bottles, refuses to strap them in while driving, and smokes like a chimney in front of them.

By comparison, Hannah and her friends back home in North America are a bunch of perfectionists, mashing only the best ingredients for baby food, installing water filters on their taps and all manner of safety gadgets in their homes. Eventually Hannah concedes the delusional nature of these efforts. “The organic baby food and the obsessive baby proofing had the quality of magical thinking,” she admits. “We might as well have hung charms against the evil eye on their doors, or tied red strings around their chubby wrists.”

When war breaks out in Gaza, the truth of human vulnerability hits home for Hannah. During three weeks of Israeli bombardments, she is stunned by the devastation she witnesses, and by how “the flattened buildings of Gaza City, the children without water, the hundreds – soon over a thousand – Palestinians dead,” go unreported in the local news.

When asked how much has changed since the events recorded in her book, Freedman averts her eyes. “I wish I felt that more had changed. Netanyahu, who was elected for a second mandate in 2009, is still in power. Abbas has been Palestinian President since 2005. The Gaza wars seem less like separate conflicts than the resumption of an existing one, with periods between not of peace, but stalemate. It’s been an extremely interstitial period, with flare-ups of conflict and terror. The longer things don’t change,” she adds, “the harder it is to imagine change.”

Despite the current political climate in Israel, Freedman remains hopeful that peaceful coexistence is possible. Arabic for Beginners hints at what is needed for that hope to be realized.