Are You Married to a Psychopath?

A review of Are You Married To A Psychopath? by Nadine Bismuth

“You can’t be deep without a surface,” proclaims a cheeky lover in Jonathan Lethem’s You Don’t Love Me Yet, and surface, or in this case, style, is the first thing to jump out at the reader in Nadine Bismuth’s newly translated collection of short stories, Are You Married to a Psychopath? (Just look at the striking title.) Bismuth’s persistent use of satire fills her stories with lurid and exaggerated characters and scenarios. But her stories aren’t only satirical for the sake of style or entertainment; Bismuth uses her aggrandized depictions to convey human struggle, folly, and carelessness.

The stories in this collection are at once playful and depressing. Bismuth paints grotesque yet familiar portraits of people fumbling with the hearts and hopes of others. She conveys the universal pain of dissatisfaction while exposing and mocking selfindulgence in her characters. In “Come Back, Julien!” a kept woman calls on her cleaning lady for support during a moment of extreme distress:

Fatima started to tell me that her sister, who still lives in Morocco, had developed breast cancer. I felt like crying, ‘My God, Fatima, don’t tell me stories like that! Give me your couscous recipe, or something!’ Couldn’t she see that I was just coming out of a mega panic attack? 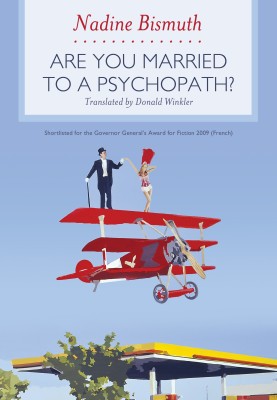 Are You Married To A Psychopath?
Nadine Bismuth
Translated by Donald Winkler

Bismuth writes from the perspective of all kinds of people (not all of them this despicable) – lovers, cheaters, children, and mothers– and creates characters, who, at their fullest, can be sympathetic or infuriating. The breadth and diversity of the world she creates reveals her interest in what unites, divides, and differentiates people. How different are we from one another? How different is the reader from any one of these often outrageous characters?

One way to look at the questions simmering under Bismuth’s prose is to view the first story as a springboard for those that follow. “Fed Up Yet?” is a collective lament for single women, a self-deprecating cry to an uncaring world whose inhabitants have smugly coupled off. The protagonist reflects, “Fed up yet? We’ve been fed up for aeons.” Bismuth gently ridicules the protagonist’s plaints and exploits, but she also elicits sympathy from the reader, and touches on the common practice of envying the lives of others.

In later stories, Bismuth provides some realities to contrast to the romantic ideals and envies of the single women in the first story. In what these women imagined to be greener pastures, Bismuth instead describes people living in various states of romantic chaos. Bismuth uses this juxtaposition to point to the folly of envy. There are moments, and this is a risk ofwriting satire, when some of Bismuth’s characters – those that are too big and too revolting – suddenly read like deflated caricatures. This occurs in “Man Unfaithful, Woman Sad,” comprised of a set of hysterical emails sent by a deceived wife from a holiday resort. The protagonist recounts to her friend: “I told him what I really thought, how do you expect me, Monsieur, to bring up children along with a liar, a hypocrite … The supervisor asked me why I was crying, he said I was more beautiful when I was smiling … and one thing led to another … he locked the door to the Business Center and pulled down the shades.” Bismuth may be intending to crystallize the role of hypocrisy in relationships, but it’s hard not to dismiss this predictable scenario.

Such impressions are fleeting. If when taken alone, some of the stories are reduced to superficial vignettes of the love lives of individual French-Canadians, the stories when grouped together are interdependent, and play off each other, expressing the universality of Bismuth’s portraiture. Although set in Montreal and its surrounding areas, the author’s observations offer all readers a hyperbolic and cynical look at themselves – if they can bear it. mRb