A review of Léa by Ariela Freedman

Let me upfront about this: in the entry to my house, a place of honour goes to a poster of Sophie Bissonnette’s film Des Lumières dans la grande noirceur featuring the smiling face of Léa Roback. Léa is one of my heroes, a militant for workers’ rights, justice, peace, equality, and the women’s movement. She also was a family friend, the big sister of one of my husband’s colleagues, Leo Roback, and someone who followed the progress of our children with the enthusiasm she showered on her many nieces, nephews, and their offspring.

So when I saw that Ariela Freedman had written a fictionalized biography of her, I knew I had to read it. But when it came time to sit down with the book, I was filled with apprehension. What if Freedman hadn’t done Léa justice? What if she’d foxed the facts? What if the book were boring? 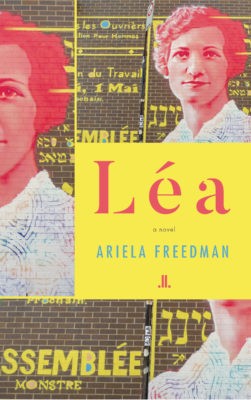 I shouldn’t have worried. Freedman’s biographical novel is a good read, faithful to the outlines of Léa’s life, and intensely imagined when the author allows herself to fill in some of the blanks or alter slightly what actually transpired. As it happens, I was able to fact-check the book a little since, when going through my papers recently, I came upon the transcriptions of three interviews I did with Léa in 1983 for a project about her life that never materialized. In comparing Freedman’s novel and the interviews, I found many stories repeated, and when there were differences, I nodded my head: yes, I said to myself, that could have happened, even if it wasn’t quite exactly like that.

In the Afterword to the novel, Freedman says that she had initially thought of writing a straight biography of Léa but decided rather to produce a novel because that form “allows more intimacy and little bit more freedom.” She adds: “The more I wrote, the more I felt like I was channeling not only the past but the present.”

Léa, after all, was larger than life. While in the twenty years since her death, she’s been lauded most for her role in advancing feminist causes, she was much more than that. Born in 1903, the second child and first daughter of an Orthodox Jewish family, she grew up in Beauport, near Quebec City. Her father was religious, and not much of a businessman: nevertheless, they had a general store in the small town for about ten years. She and her brothers and sisters went to school in Quebec City and played with the neighbours in French. It was a period that marked her. “I think I became a feminist at a very early age because of what I saw in Beauport,” she told me; there were so many women who worked so hard, who were always pregnant, and who often had husbands who frequently took advantage of them, and sometimes abused them.

The Roback family returned to Montreal in 1918 because Léa’s mother was ill from working too hard and bearing ten children. Léa went out to work at the age of sixteen, and railed at what she saw. Because she was pretty, well-spoken, and intelligent, she impressed a series of employers, although frequently she was not impressed by them except in negative ways. She wanted more experiences and went to Europe to study, first at Grenoble and later in Germany. But everywhere she looked she saw injustice, and she was drawn to left-wing causes including the Communist party.

Freedman’s novel starts with Léa walking the picket line in a successful garment workers’ strike in Montreal that she helped organize in the 1930s after she came back to North America. The book then doubles back to tell the story of her life up to then. It ends in August 1945 when the US drops the first atomic bomb on Japan. “This changes everything,” one of her fellow Communist friends says. And it does, in a way.

Readers today may find Léa’s years as a Communist hard to forgive or even understand, given the political repression in the USSR for much of the 20th century. But when Léa joined the Party, there was so much wrong with the world that radical propositions seemed worth considering, or even fighting for. Freedman ends her novel: “She will leave the Party, but all her life, she will embrace the struggle.”

That she certainly did. As Lea ended our conversations nearly four decades ago: “Basically what I want is that, when I look in the mirror, I want to be able to say to myself, well, I tried.” Words to live by, I think. Freedman does us a great service in telling Léa’s story in such an engaging way.mRb

Mary Soderstrom is an old leftie herself, and the author of a biographical novel about an Anglophone Patriot in the nearest thing to a revolution that Canada ever had: The Words on the Wall: Robert Nelson and the Rebellion of 1838 (Oberon Press, 1998).