The Ubiquity of Otherness

A review of Atavisms by Raymond Bock

Canadian literature revels in narratives of the Other, works invested in displaced culture and tradition. From Joy Kogawa to Michael Ondaatje, Rohinton Mistry, M. G. Vassanji, and Saleema Nawaz, CanLit generates and celebrates narratives born of elsewhere, and characters concerned with finding their place in ever-diversifying Canadian communities. Interestingly, fewer pages have been spent (at least in English) investigating the notion of otherness as it relates to the relationship between Quebec and the rest of Canada. The characters in Raymond Bock’s short story collection Atavisms (translated from the original French by Pablo Strauss) not only confront this relationship, but through its inherent complications find a beautiful universality in the frustrations of being an Other. 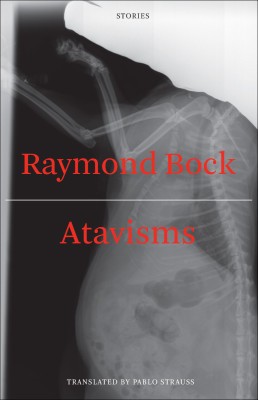 Bock’s characters are immersed in trying to find their context in a Quebec that is experiencing the same struggle. These stories are rich in both the tacit and tangible manifestations of a people who at once belong and do not, are citizens and are not, are Canadians and are not. The first story, “Wolverine,” the collection’s standout, recounts a dark tale of a post-FLQ drunkenness, where three lifelong friends abduct a former Liberal cabinet minister, take him to the fringes of the affluent Laurentians, and torture him, beating him with anger born of marginalization. The final act of the felony is so brutal, so humiliating and violent and intrusive, that its metaphor is impossible to ignore. Bock’s writing is fierce, unrelenting, and beautiful. This is no more apparent than in the story’s climax, as the speaker’s thoughts and language are accelerated by a sense of fear, anger, and violence:

“… and if they’d known I swear to God if they’d known they’d start sucking our blood the moment that rag was hoisted in Ottawa, it’s not sap flowing from the maples anymore it’s our blood they’re tapping, year after year, why do you think the flag is red les tabarnacs and what’s your favourite color motherfucker, I’ll show you concessions, you want to see compromise, you want to see Quebec brought into the fold ‘with honor and enthusiasm,’ câlisse?”

The collection finds its strengths in the stories either set in the present or absent of temporal attachments. Bock’s characters aren’t so much concerned with finding their place in Canada, as they are with finding their place anywhere. Being immersed in conversations of nationalism merely over-complicates their lives, lives that aspire to simplicity. “The Worm” and “Room 130” are stories about people, relationships, and love, which defy borders and only happen to be set in the Quebecois diaspora.

At their best, these stories are not about being Quebecois; rather, they are enriched by being set within that milieu while engaging in universal conversations. “Dauphin, Manitoba” takes its narrator beyond la belle province and uses setting as a filter through which the reader can better understand the sense of displacement and marginalization that haunts Bock’s characters.

When Atavisms leaves the present, however, its stories are less successful. “The Other World,” “Eldorado,” and “The Call” lack the urgency (both in language and context) that fuels the contemporary stories. In the absence of the complicated and universal present they fall short.

Atavisms begins by stating, “It’s always been about the words.” And that’s a beautiful simplification of the Quebec dichotomy, where there is always a sense of trespassing, of being an Other in a place where the entire population feels like an Other. That is the sense that the reader gets in Strauss’s translation of Bock’s stories, the sense of visiting, with interest, but in a way that suggests the inevitability of impermanence. The best moments of Bock’s stories are the simplest – they suggest that strife and pain and frustration are universal, that they defy language and borders, that characters are people not politics.

Mike Spry is the author of JACK, Distillery Songs, and Bourbon & Eventide, and was nominated for the A.M. Klein Prize, the ReLit Award, and the Journey Prize.