Authenticity Is a Feeling: My Life in PME-ART

A review of Authenticity Is a Feeling by Jacob Wren

Those who know Jacob Wren, or have read his author bio, will also know the standing joke that he “travels internationally with alarming frequency,” constantly on the go and participating in performance and literary festivals as well as residencies around the world. It seemed apropos, then, for me to pack his book Authenticity Is a Feeling: My Life in PME-ART as reading material for a recent writing residency of my own. Through his first-person narration, his honesty, humility, and stringent self-criticism, through the descriptions of his internationally acclaimed performance work beyond the scope of his literary achievements – of which I had already been aware – I was able to become more familiar with Wren. If I already held Wren in high esteem as a writer, artist, and person, this fascinating hybrid of memoir, archive, performance history and theory, and humorous storytelling reinforced that impression.

Wren’s newest title is intended as a celebration of the twentieth anniversary of PME-ART. A Montreal-based, interdisciplinary, bilingual (English/French), and collaborative performance group administered primarily by Sylvie Lachance and Richard Ducharme, PME-ART assembles a range of creative minds (including Wren) who work together to radically reshape the potential of theatre. “If in conventional theatre you had costumes, characters, acting, scripted narrative, piped-in music, and artifice,” Wren writes, “instead I wanted people dressed in their normal clothing, being themselves, walking a tightrope between structure and spontaneity […] anything and everything that might bring us just a little bit closer to authenticity or reality.” Hyper aware of how artificial authenticity itself can be – simultaneously striving after and denying its existence – Wren defines it through temporality. Authenticity in art can only be experienced, communicated, absorbed, and, quite simply, felt at a certain time, in a certain place, among certain people. During a performance, one can feel a temporary sense of authenticity in “much the same way one might feel sad or feel joy.” 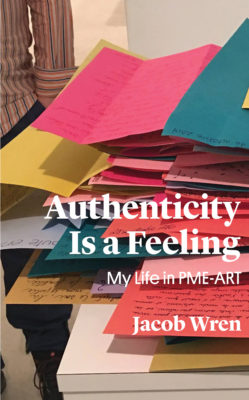 Authenticity Is a Feeling
My Life in PME-ART
Jacob Wren

Chapter by chapter, Wren leads the reader through a selection of the intriguing performances PME-ART created over the past two decades, describing the collaborative creative process, the hurdles, the evolution, the parallel developments and distinguishing features in relation to global performance trends, and more. To grossly simplify and name but a few examples: En français comme en anglais, it’s easy to criticize (1998-2002; performed by Wren, Martin Bélanger, Alexandra Rockingham Gill, Benoît Lachambre, Julie Andrée T., Tracy Wright) includes a game of translation, performers passing English and French back and forth between each other, while also taking the opportunity to critique their translations. The DJ Who Gave Too Much Information (ongoing since 2011; performed by Wren, Caroline Dubois, Claudia Fancello, Adam Kinner, Marie Claire Forté) consists of a performer choosing a record, telling a personal story about it, then playing the song; another performer chooses a follow-up record, perhaps constructing a loose thematic or connotative thread between musical interludes. Misleadingly simple, these highly evocative projects can create a sense of community between performers and audience, sometimes prompting the audience to tell their own stories, and occasionally leading to spontaneous outbursts of encouragement or even contempt. I’ll refrain from even attempting to reproduce Wren’s anecdotes about the latter, these being equally masterful and hilarious.

While Authenticity Is a Feeling is clearly written in Wren’s voice, he extended PME-ART’s collaborative spirit to the writing process, asking current and former participants to read and respond to the book-in-progress, parenthetically including their reactions and differences of opinion. The book itself becomes a document illustrating the challenges and ironies of collaboration, exposing the inherent anti-collaborative stance of authorship. Wren elegantly navigates this contradiction, positing collaboration as a state of constant flux, of questioning, negotiating, and compromising with integrity. In awe of the past twenty years, here’s to the next decades of PME-ART experimenting, flourishing, and authenticating performance together. mRb