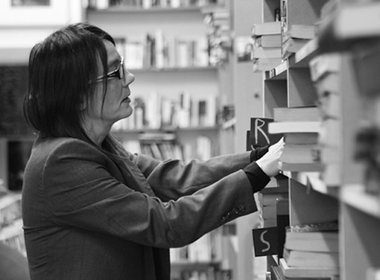 In any era, literary life tends to congregate around poles. In the early twentieth century, Paris was the magnet for North-American writers. Montreal drew Anglo-Canadians in the 1940s, a role this city once again plays for the young and mobile. But there currently is no recognized literary capital, no single place where ambitious talents know they must be in order to meet key people and imbibe the local beverage of choice for inspiration. Rural writing retreats and university campuses are the main centres of production, which makes Sina Queyras a quintessentially contemporary writer, although nothing else about her first novel is typical – or ordinary.

An award-winning poet, anthologist, and creative writing teacher at Concordia University, Queyras took a decade to write Autobiography of Childhood. She began in true Canadian fashion with a series of short stories, but, exercising her editor’s eye, she decided they added up to “a cliché mother-daughter coming-of-age-story.” So she started over, producing the better part of a complete new draft during a month-long residency at the Vermont Studio Center where she held a fellowship in 2003.

The first six chapters bear resemblance to the original short stories in that the characters and situations are the same, but conventional storytelling has given way to a wheel-like structure with six spokes, one for each of the five grown siblings and their father, Jean. The characters look back on a shared past marked by poverty, loss, and frequent moves; a past much like Queyras’s own. The hub of their thoughts is a hospital bed in Vancouver where Therese, one of the siblings, lies dying, after a long battle with cancer. Each character faces Therese’s death with a different level of awareness, concern, or lack thereof. The dying woman is drowning in memory; the people around her are distant voices. 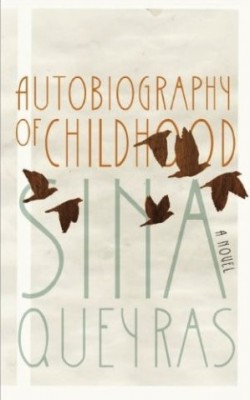 Guddy, an academic, makes her way back from New York during a snowstorm, hoping to arrive in time for one last conversation with her estranged sister. But Therese has left her caretakers with instructions that, when the end is near, she prefers drug-induced sleep to wrenching consciousness. Guddy aches to say goodbye, but her sister is oblivious. A painful irony, since consciousness is what this novel is all about: the searing inner landscape of six completely different personalities who have little in common but the past. Jerry is a salt-of-the-earth type who appreciates the Lower Mainland of BC as “the most golden place on earth.” He is content with his small stake, yet tortured knowing his 21-year-old son has become a property speculator, the antithesis of his father’s working-class ethic. As for the other siblings, Bjarne lives on the streets, visits his mother Adel in her mobile home to do his laundry, stock up on food, and watch Judge Judy on TV. Annie takes care of Adel and frets about her dying sister whom she never understood. Jean, their father, relives the family’s tragic beginning, remembering how, as a young immigrant from France, he became a husband and father too soon. Struggling for decades to make ends meet, he coped with a flamboyant, unsatisfied wife, unwilling to let go of a bad marriage.

Queyras acknowledges an anecdotal similarity between her own past and events in the novel, but says that lived experience has been thoroughly transformed: “Real life is far too complex for fiction.”

Queyras acknowledges an anecdotal similarity between her own past and events in the novel, but says that lived experience has been thoroughly transformed: “Real life is far too complex for fiction.”

It’s no accident, though, that she decided to become a writer. As the youngest child of a big, complicated family, she says she always felt guilty; frequently at a loss to understand what was happening, she was nonetheless driven to try. “The last one gets to watch, to learn from the older siblings’ mistakes. The others felt I had it easier, which is true. As the youngest, I became the emotional barometer. They were rebelling, acting out. I was watching.”

Her approach to fiction is fearless, unsparing. She tackles anger and frustration with courage, making no concession to the readers’ subliminal yearning for redemption or reconciliation. The labyrinthine narratives are soaked in sadness derived from the early death of an older sibling, Joe. Childhood is not to be understood, it is to be embraced. “We plant our childhoods like flags. We insist on them. We say: this geography, this materiality, these emotional landmines, this is who I am. We insist on them because without them we are nothing.”

A soft-spoken woman in her late 40s, Queyras exudes loyalty to the world that has fed her art. While the fictional mother is treated to hard analysis in the book – “narcissistic, bombastic, histrionic, mean and, worse, incapable of learning,” thinks the dying Therese – Queyras says she is sorry that her mother, who died in 2010 at the age of 78, never lived to read the book. “I think she would have liked it.”

“I wanted to write about the legacy of trauma and poverty. I get very angry when people think working-class people have no interiority,” she says. Or that the only consciousness worth exploring is the mind of intellectuals.

A high school dropout, she started university in her late 20s, focusing on creative writing. Her literary gods were the twentieth-century modernists: Samuel Beckett, Gertrude Stein, especially Virginia Woolf. “I was overwhelmed by her ability to capture consciousness. Her style blew my mind. Reading Woolf, I realised I knew nothing. My little desires were so minuscule beside hers. I saw that I had to commit to a life-long contest of reading and practicing in order to do anything in literature that would be moderately interesting.” Modesty has characterized her approach to writing and informs her self-judgement.

“This is a very small book,” she says, looking at my much-thumbed copy lying on the café table between us. “It’s a subtle, quiet novel. I’m proud of it, but very realistic.” Experimental, conceptual writers may find it too middle-of-the road, she says. Readers looking for action won’t find it. She doesn’t care. After spending years helping would-be writers find their way in a classroom situa- tion (including the past four at Concordia), she looks at literary life as a privileged one, and takes a long-term approach. It’s the body of work that counts, she says, not instant approval, prizes, or even a large readership.

These days, her home life is taking up a lot of space. Since her partner, Danielle Bobker, gave birth to twins five months ago, she’s lucky to get twenty minutes of writing time per day. “If I can manage that, then writing remains an open page in my mind,” she says. “I can think about it, work on it mentally, throughout the day.”

In preparation for parenthood, she installed a desk in the basement laundry room of their east-end Montreal home. “I figured I could work while the clothes were in the dryer.” It hasn’t quite worked out that way. Bobker, who teaches seventeenth- and eighteenth-century British literature at Concordia, escapes to the laundry office too.

With the changes brought about by parenthood, Queyras has had to all but give up writing for the literary blog Lemon Hound, which she founded in 2005 as a platform for critical writing and now shares with several other writers. (A selection of her own essays written for the blog were anthologized last year in a volume called Unleashed.)

The next book, she says, will be larger, more ambitious; the style, more conceptual. “I will make it as beautiful as I can. But my past is raw, rugged. That’s what I have to work with.” mRb