Because They Were Women

A review of Because They Were Women by Josée Boileau

It’s never not chilling. Each year in early December, remembrances unfurl on social networks and in the mainstream media. Every single time I walk through the Place du-6-décembre-1989 between the fourteen granite stelae, I have a lump in my throat. And I’m dismantled, again and still, as I sit here reading Josée Boileau’s account of the Montreal massacre and its echoes.

That day in early December over three decades ago, a man armed with a semi-automatic rifle walked into the university and systematically targeted women, killing fourteen. The killer’s motivation was explicitly anti-feminist. 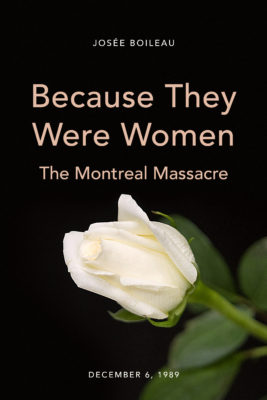 Because They Were Women
The Montreal Massacre, December 6, 1989
Josée Boileau
Translated by Chantal Bilodeau

Because They Were Women: The Montreal Massacre, December 6, 1989 was first published in French, its release timed to coincide with the thirty-year anniversary of the mass shooting at the École Polytechnique engineering school. The commemorations are always emotional: we recall the stunning, methodical violence and grieve the lives cut far too short. Often, there is a sense of bewilderment. Three decades have passed and what has changed, countless newspaper pieces and cultural contributions ask. A piece in Le Devoir alludes to our official and collective incomprehension: “cet attentat antiféministe […] demeure incompréhensible aujourd’hui.”

Boileau’s book, too, stuns, emotes, and grieves; she notably includes extensive and moving biographies of each of the fourteen victims. But as the world is frozen at half-mast and we gather in baffled silence, Boileau strives to understand: the veteran journalist, who covered the massacre for Le Devoir, provides a terrifyingly detailed play-by-play reconstruction that leaves no doubt as to the misogyny and anti-feminism that drove the killer; and she explores in detail the social and political context of feminism, femicide, and gun violence before and after 1989. Boileau reprints excerpts of interviews; she highlights the achievements of Québécoises in public life, science, and leadership; and she offers extensive lists of seemingly relatively minor policy decisions, the accrual of which highlights both how far we’ve come, and how much can and must still be done.

In the intervening years, we’ve seen shifts forward and steps backwards, both in our consciousness and in the legislation around gun violence. December 6 has been declared the National Day of Remembrance and Action on Violence against Women. But we’ve also seen a femicide on average every three days in Canada, with an over-representation of Indigenous women and girls. Boileau’s French title, Ce jour-là (“that day”), emphasizes the extent to which the massacre was pivotal, from measures to support women in engineering, to feminist activism more generally, to gun-control measures such as the federal Bill C-17 passed in 1991 to restrict firearms acquisitions (and subsequent Conservative rollbacks).

The translation otherwise is unusually literal, a utilitarian rendering of every exclamation mark and idiom in the original. Interestingly, Bilodeau chooses to retain the narrative present tense commonly used in French, which both underscores the text’s translatedness and lends it an unexpected immediacy. That said, Ce jour-là‘s English publication is important, sharing the mourning across the two colonial language communities, and sharing some sense of agency as well. The book’s useful overview of the history of feminism in Quebec may also provide some new information for English readers.

Ultimately, what the book does is what we all do, every year: remember, cry, rage. Move, change, fight. And say their names.