Three Sides to the Story

Behind the Eyes We Meet

A review of Behind the Eyes We Meet by Mélissa Verreault

Behind The Eyes We Meet, Mélissa Verreault’s second novel and her first to appear in English, translated by Arielle Aaronson, isn’t what it initially seems. Rooted in contemporary milieus and conflicts, the first of three parts follows Emmanuelle, a twenty-nine-year-old graphic designer who lives in Hochelaga and goes by Manue.

Manue’s birth meant a loss: that of her twin, a secret her mother only recently disclosed to her. After the death of her father in her youth, Manue became unmoored, eventually turning to rosé and empty sex as balms for her angst. Now, the disappearance of her goldfish – the inspiration for the French title, L’angoisse du poisson rouge – leads Manue to Fabio, a disillusioned, thirtysomething Italian immigrant working as a janitor at Cinéma Beaubien after a cocaine-fuelled decade as a film grip in his home country. Reserved Fabio might just be the stabilizing force Manue needs to confront her inability to love, repair her combative relationship with her mother, and yes, even find that missing goldfish. 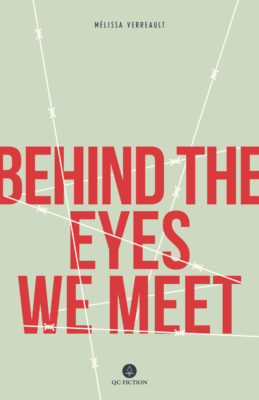 Behind the Eyes We Meet
Mélissa Verreault
Translated by Arielle Aaronson

Though her quirks and humour are entertaining, Manue feels familiar – another manic pixie dream girl trying to get her life back on track. But then, Verreault knew that. In an interview with La Presse, she explained, “[Manue] is charming and kooky, but she’s one among many. Alone, her story wasn’t worth much.”

What makes both Manue’s story, and in part three, Fabio’s story, worthier is the unexpected story juxtaposed between them. The second part of the novel follows Fabio’s grandfather, Sergio, a soldier in the Italian army during World War II. Told in the third person, the narrative is a radical break in time, setting, and voice – a gutsy choice on the part of the writer, and one that, in my opinion, pays off, though some readers might find it initially jarring.

Conscripted in 1941 at the age of twenty-one, Sergio spends a year on the front before he is captured and brought to a Russian labour camp, where he passes the remainder of the war. As a POW, he witnesses his compatriots succumb to violence, starvation, disease, and hypothermia, or la morta fredda in Sergio’s native Italian. Months become years. As hunger transforms his fellow men into cannibals, Sergio makes a vow: “If he had children one day, he would never tell them how monstrous humans can be.”

It is a vow that yokes his story to Fabio’s, and by extension, Manue’s. Though Sergio struggles to find meaning in so much suffering, he keeps his promise. His grandson remembers him as someone who “had rarely spoken of the past … as if he’d been born at twenty-five, just back from the war.” When Sergio passes away, Fabio is pulled back to his homeland, where his grandmother gives him an important gift: a box containing Sergio’s letters and memoirs. With Manue’s encouragement, Fabio finds the courage to immerse himself in his grandfather’s life, which puts his own privilege into perspective.

In Aaronson’s fluid translation, Behind the Eyes We Meet takes us beyond modern-day Montreal to a time, place, and perspective that lies outside many a contemporary reader’s awareness – Italophiles will enjoy the liberal sprinkling of Italian throughout the text. The pairing of Manue and Fabio’s stories with Sergio’s points to a very human reflex: the tendency to try to quantify and compare suffering. In this case, Sergio’s experience is indeed the most extreme, but much like the stories that lie “behind the eyes we meet,” all three stories are significant. As Fabio puts it, “There’s no such thing as a straightforward life.” mRb