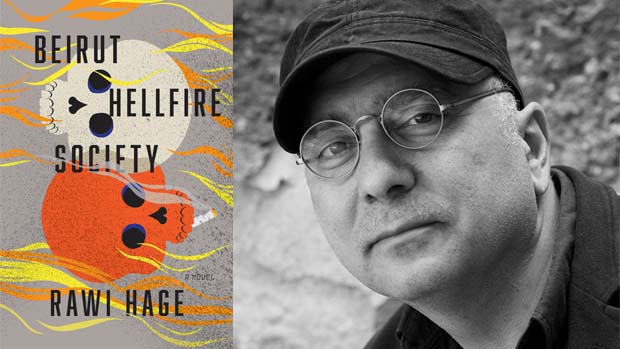 A simple image served as the starting point for Montreal-based author Rawi Hage’s fourth novel, Beirut Hellfire Society. On a balmy morning in early September, he describes that image to me over coffee at a busy café in Mile End. “Someone standing on a balcony above the road to the cemetery. Simple.”

That someone on the balcony became Pavlov, the novel’s twenty-year-old protagonist. The son of an undertaker, he’s no stranger to the wailing, black-clad mourners who regularly pass below his second-storey window. Following his own father’s death, Pavlov becomes a disillusioned voyeur to “the traffic of floating caskets.” He agrees to take up his father’s role in the Hellfire Society, a sect of “hedonists, heathens, idolaters, [and] infidels” that offers burials and cremations for fellow marginals and dissidents.

Hage is candid about the inspiration behind the book’s dark subject matter. “You get to a certain age when you start losing many people around you,” he says. He alludes to the death of a close friend, Lebanese-Canadian poet John Asfour, to whom Beirut Hellfire Society is dedicated. “But inspiration,” he adds, reflective. “It’s just a story.” 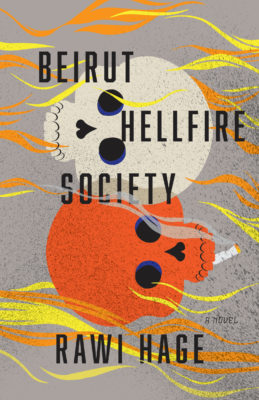 In fact, it’s many stories. In Beirut Hellfire Society, Pavlov is the common denominator in a series of vignettes peopled with characters that are as colourful as they are complicated. Among them are Jean Yacoub, a father mourning the homosexual son he rejected, and a prostitute named Nadja, who murders a friend’s murderer in an act of vengeance. El-Marquis, a former professor of French literature whose “unorthodox” teaching methods included bedding his students, comes to Pavlov seeking an orgy for a funeral, while Hanneh and Manneh, two lipstick- and heel-wearing male guardians, assist Pavlov in carrying out his Society duties.

The vignettes are told in a lyrical style that Hage describes as “organic” and attributes to his own sense of inadequacy when he first started writing in English. They span the four seasons following the death of Pavlov’s father, who is killed when a bomb causes him to fall into a grave he’s in the middle of digging. As far as the book’s structure is concerned, the content led to the form. “So many things end,” says Hage, referring to the amount of death in the book. Not even the mourners are safe from the falling bombs. “The act of ending dictated these structures.”

Hage believes that rituals – religious or not – are a bonding mechanism.

With death front and centre, Beirut Hellfire Society is a treatise on living with war. While the timeline is made explicit – it’s set in 1978, a pivotal point in the Lebanese Civil War – most of the references to the conflict are non-specific. “I hate facts,” Hage says bluntly, when asked if he returned to Beirut for research purposes. He doesn’t mean it in the Trumpian sense, and clarifies: “I’m just not that kind of writer. For me, [writing] is an act of creativity. I’m creating mythologies.” In an age where journalistic fiction is held to high esteem, I admire this about him. Unsurprisingly, Beirut Hellfire Society has a timeless quality common to Hage’s previous novels, including De Niro’s Game (2006), Cockroach (2008), and Carnival (2012).

With this latest novel being billed as “a brilliant return to the world Rawi Hage first imagined […] in De Niro’s Game,” comparisons are bound to happen. Much like Bassam, the main character in Hage’s Dublin Literary Award-winning first novel, Pavlov experiences the randomness of wartime violence firsthand. “In a war it’s, ‘Either you’re with us, or you’re against us,’” explains Hage, who left Beirut in his late teens but still returns from time to time. “Pavlov tries to follow his own path without getting swept up in violence.”

The themes may be familiar, but as far as the characters go, Bassam and Pavlov are very different. Pavlov is level-headed and compassionate. An observer, he has a sense of justice, much like the heroes of the Greek myths he turns to as he tries to understand the chaos of the world around him. “If humans were not being manipulated by Olympian gods,” he muses, “they were manipulating each other for their own ends.”

When asked about Pavlov’s obsession with Greek heroes, Hage says it seemed a natural fit for the character. “The Greeks have an influence in that region,” he says, describing his writing as an “excavation” of various historical layers. “But people deny it. They refuse to accept that religion has a geographical, cultural, and historical context.”

Beirut Hellfire Society is an extension of that thought, calling into question the paradox of religion. Can humans even conceive of that which is divine? Perhaps rites and rituals provide comfort in times of grief, as in the Greek chorus-like mourners whose tears Pavlov describes as “the most truthful expression of his world.” But rituals can also seem futile. In one of the novel’s more humorous moments, a sheik and a priest trade prayers over the body of a Muslim-turned-Christian for three hours – both pushing for the last word and thereby ensuring the deceased ends up in the “right” afterlife – until even the mourners have had enough.

The critique goes beyond religion, confronting the uniformity that collectives tend to reinforce. For example, even the avowedly anti-religious Hellfire Society is a kind of religion, with its own set of beliefs and rituals. “They say ashes to ashes, but we say fire begets fire,” Pavlov’s father chants during a secret ceremony at the Society’s crematorium in the hills. “Maybe I just wanted to show how easy it is to construct a religion,” Hage admits. When I see a connection in Quebec’s pendulum swing from a religious to a secular state, he nods. “The ruelles vertes all have these shrines that have books in them,” he says, describing the Little Free Libraries that have popped up all over the city. “But they’re shrines. The same form as any Catholic shrine.”

Hage believes that rituals – religious or not – are a bonding mechanism. “That repetitiveness,” he says. “It brings some solidarity.” His novels suggest a fascination with people who live outside the bounds of traditional society. When I point out that his protagonists are all orphans, he pauses thoughtfully. “Are they really?” he asks. But his surprise quickly fades. “Yes, of course. All artists have this obsession with one thing – how to exist without belonging.”

In Pavlov’s case, canine companionship provides solace. In a flourish of the magical realism that Hage is known for, Pavlov and his dog Rex trade thoughts on everything from ancient Egyptian philosophy to sex. I suppose a dog is bound to materialize in your story when you name your protagonist after the Russian physiologist who discovered classical conditioning. For Hage, the connection between church bells and Pavlov’s bells is obvious. He says he found the idea both amusing and subversive. “But a dog’s life should be idealized,” he continues. “It’s the most truthful kind of living.”

Pavlov, too, tries to live an honest life. As noble as he is, there’s no easy way out for him, even as his few remaining family members escape Beirut. The book’s ending is befitting of a Greek tragedy, offering a reminder that, as Hage puts it, “Literature is about possibilities.” A novelist imagines characters just as the faithful imagine gods. mRb