A review of Beyond The Indian Act: Restoring Aboriginal Property Rights by Tom Flanagan, Christopher Alcantara, and André Le Dressay 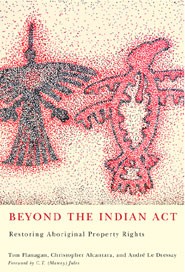 The Indian Act is the iconic statute that defines the relationship between First peoples and everyone else in Canada. Considered by many to be inherently racist and colonial, despite repeated amendments, it gives the federal government exclusive jurisdiction over “Indians and Lands Reserved for Indians,” including the power to define a Registered “Indian” and his or her rights. One of the key powers retained by the Crown under the Indian Act is the ownership of Native reserves – three million hectares – whose title Native people in Canada do not generally own. The federal government, through Indian and Northern Affairs Canada (INAC), has jurisdiction over almost all these lands and must review any transactions that involve them. As a result, burdensome approval processes and inadequate property rights laws have slowed down on-reserve development. A solution to this problem is the subject of Beyond the Indian Act: Restoring Aboriginal Property Rights.

The authors present their case for a First Nations Property Ownership Act in three parts. The first section of the book, written by Tom Flanagan, a political science professor at the University of Calgary and former senior advisor to Prime Minister Stephen Harper, presents a historical overview of property rights, argues that Native peoples traditionally had property rights, and analyzes the U.S. government’s failure to give property rights to Native peoples in the late nineteenth century. In the second section, Chris Alcantara, a former graduate student of Flanagan’s, discusses the limited property rights First peoples currently have under the Indian Act. According to Alcantara these property rights “all have intrinsic difficulties that limit their usefulness.” The concluding section, by B.C. economist André Le Dressay, outlines the authors’ joint proposal for First Nations legislation that “would recognize their collective [rights] to their current landholdings while also facilitating the introduction of fee simple ownership.” “Fee simple” is the usual way in which real estate is owned in common-law countries such as Canada.

A driving force behind the proposed legislation is Manny Jules, Chief of the First Nations Tax Commission and former Chief of the Kamloops Indian Band, who wrote the book’s impassioned foreword. The proposed legislation is largely modeled on the Nisga’a Land Title Act, and incorporates work done by Le Dressay for Jules and the Kamloops Indian Band. Curiously, the authors seem to have ignored the experience of B.C.’s shíshálh Nation and the provisions of Sechelt Indian Band Self Government Act (passed in 1986), the first to give Native people rights to their land in fee simple. Did the authors leave out the Sechelt experience – a controversial experiment which resulted in unforeseen complications – because it does not necessarily support their thesis, or did they restrict their research to a certain time period?

The authors emphasize that restoring Aboriginal property rights would result in more Native home ownership, lower cost of Native government, higher First Nations revenues from development, fewer legal disputes arising from land ownership, and improved incentives for investment on Native lands. First Nations leaders may, however, hesitate to support this proposal. Mi’kmaq lawyer Pamela Palmater, who holds the indigenous governance chair at Ryerson University, argued in her April 2010 review of this book in the Literary Review of Canada: “The potential for entire reserve land bases to be lost under this proposal is significant given the high rates of extreme poverty in First Nations (impoverished families might sell land for basic necessities) … The erosion of aboriginal territory likely to accompany privatization of reserve property would ultimately lead toward full cultural and political assimilation.”

While this well-argued work should be read by anyone with an interest in Native issues, it should be kept in mind that its central proposal reflects a right-wing ideology. Jules and Flanagan are both on speaking tours to convince Native leaders and decision-makers of its value. The federal government has made no comment. The authors, nevertheless, describe a Native-inspired initiative and, as such, it has a chance of being heard mRb

D.L. Daigneault is the Editor of Native Leaders of Canada (New Federation House) and is a member of the professional staff at Dawson College in Montreal.