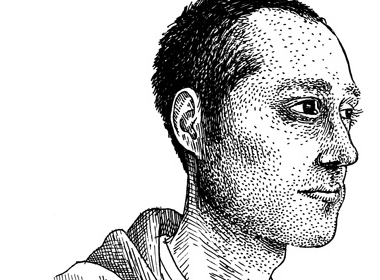 Big Questions is a big book. At nearly 600 pages, it is the culmination of 15 years worth of work by graphic novelist Anders Nilsen. Finches, a bomb, crows, an idiot, a snake, and a crash-landed pilot are the focus of this epic that explores theology and the search for meaning in the sparse and desolate plains the finches inhabit.

The short strips filled with jokes and philosophical pub talk that begin the book quickly give way to the narratives that will shape the finch-verse. Grandma aches and toils through her day, taking care of her grandson, the Idiot. A bomb drops out of the sky and lands without exploding. A plane crashes into a house and an angry pilot emerges. The significance the finches attribute to these events polarizes them into smaller groups. Add to this a gang of vengeful squirrels and a murder of malicious crows that are driven by a scarcity of food, and the landscape takes on a post-apocalyptic quality that comes complete with its own Hades-like underworld. 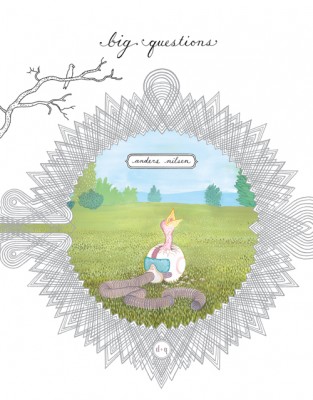 Big Questions was born of an automatic drawing exercise Nilsen did at the University of New Mexico, where he received his BFA. Sketching a new picture every 60 seconds for an hour, the central elements of the birds, plane crash, and lost pilot emerged. A series of self-published gag strips in 1999 marked the official launch of this work, which Nilsen now refers to as his newest and also oldest book. The pen-and-ink, black and white drawings are often sparse, with detailed pointillism and borderless expanses. It evokes the void of uncertainty the finches are trying to fill.

The bird-on-bird violence and cannibalism in Big Questions gives it a grim atmosphere that is reminiscent of Cormac McCarthy’s The Road.

The philosophical musings the birds engage in stem from Nilsen’s interest in theology and in how people create meaning when they interpret their experiences. The finch Charlotte Evangelista takes the arrival of the bomb, which she believes to be an egg, as something that was delivered into their care, a “miraculous visitation.” Others believe the pilot to be a hatchling who needs tending. The finch Zwingly even argues that the end is near and that if they treat the hatchling well everything will be different. Bayle, a finch named after French theologian Pierre Bayle, dies at the hands of the Idiot and then comes back to life. Believing the Idiot resurrected him, he becomes the Idiot’s follower and champion. Divided into religious factions, the finches begin to clash with each other, eventually resorting to violence.

Bleak landscapes, desperation, and the drive to survive are recurring themes in Nilsen’s work. His Dogs and Water, which won the 2005 Ignatz Award for Outstanding Story, follows a young man and his stuffed bear across a desolate land as they endure encounters with armed men and wild animals on their way to some unknown destination. The bird-on-bird violence and cannibalism in Big Questions gives it a grim atmosphere that is reminiscent of Cormac McCarthy’s The Road. Far from the levity of the gag strips that open the book, the story becomes increasingly stark and more interesting as a narrative. Death and calamity are the sorts of things that drive the finches to find an explanation, to find meaning, in a world that beats them down.

The gag strip, however, returns at the end. Filled with platitudes and burp humour, it tries to lighten the mood. Given the trajectory the book has taken, this gives it a sad trombone send-off. Without the gag strips Big Questions would harmonize better as a whole. If you can look past them, though, you’ll find an epic tale that delves into the survivalist mentality of a group of finches trying to understand their place in a brutal world. mRb

Lori Callaghan is an arts critic in Montreal whose work has been published in the Montreal Gazette and The Rover.