A review of Birds of Maine by Michael DeForge

There’s world-building, and then there’s what Michael DeForge does.

Since 2007, the Ottawa-raised graphic novelist has been amassing a body of work that’s both wildly varied and stamped with an unmistakable stylistic and thematic identity. Birds of Maine, his ninth full-length book, consolidates all his strengths even while breaking new ground, and does it on a grand scale. 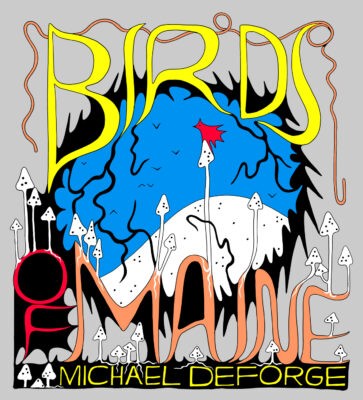 The premise is that there has been an unspecified catastrophe on Earth and the aviary population of the titular American state has successfully sought refuge on the moon – although this moon is a highly modified one. Super-intelligent but touchingly naïve, the birds have deployed their native ingenuity – sophisticated but not high-tech, in fact more like no-tech – to erect a kind of bio-dome in which life can thrive, effectively establishing a new utopia built on socialist principles. DeForge parcels out this back story in increments, letting the full picture emerge via the accretion of detail and snippets of casual bird conversation. The book’s epic length works to its advantage: DeForge allows for hangout time, indeed revels in it. Strange as it may seem to say of birds with full speech capacity, these ones come to feel like our friends.

A preponderance of the book’s characters are the bird equivalent of young adults. They cultivate romantic obsessions, fuss over whether they should get piercings and tattoos, form indie bands. Parents, for their part, fret in the timeless parental way. “Look, I get it, I went through a goth phase, too,” a mother says to a daughter who has expressed an interest in studying economics. All the while, something in DeForge’s approach encourages philosophical inquiry, both micro and macro. For example, as a bird, can you be a true friend to a moth? Especially when you’re not completely sure you can distinguish one moth from another?

For the birds, the history of human doings on their former planet is mostly a matter of conjecture, pieced together from disparate sources and rumours but essentially true. It’s an ingenious distancing device, a fresh way of presenting the cruelty and folly of human behaviour. It also means that, for all the belly laughs on offer, the book comes with a melancholic undertow. We can’t help wondering what would befall these innocents if an invasive species – let’s say humans – were to enter the picture. To follow that speculation any further would be to compromise the mystery at the heart of the book; suffice to say that what happens is highly unlikely to be what you expected.

Structurally, DeForge strikes an uncanny balance. Every page adheres to a strict six-panel grid, but within that rigidity a giddy freedom reigns. Narratively, too, the book pulls off a counterintuitive sleight-of-hand. Plot seldom carries over from one page to the next – a reminder that the book began its life as a series of stand-alone comics – yet forward motion is sustained with a seeming ease.

Psychedelic is a dated word, but it might just be the best descriptor (along with a healthy dose of the surreal, of course) for DeForge’s visual modus operandi. Saturated primary colours that are as likely to clash as to harmonize, morphing shapes, skies that are never the same hue from one page to the next – it sounds like a recipe for chaos, but it all coheres. The birds themselves are often relatively small presences within each frame; this has the effect of making you lean in, literally and figuratively, and the close attention is rewarded. Among its many salutary qualities, Birds of Maine constitutes an argument for the irreplaceable primacy of the physical book.

It will be fascinating to see where DeForge goes next after this bottomlessly rich work. For now, Birds of Maine leaves no doubt that he is at the forefront of the contemporary comics form.mRb