This Is Not the UN

A review of Black Alley by Maurice Segura

Every so often, a book comes along that shakes up the way we look at Montreal. Mauricio Segura’s first novel, Black Alley is such a book. Other authors have come at Montreal from a dreamier angle, adding new layers to the city’s mythology, but Segura does the opposite. What makes this book so affecting is that it feels so painfully real.

In Black Alley, which was translated from the French by Dawn M. Cornelio, Segura uses the perspective of new immigrants to create his own original vision of Montreal. Segura was born in Chile, but grew up in Montreal, and his take on the experience of immigrants and first-generation Canadians is hardly an optimistic one. His world is dark and claustrophobic, peopled with kids whose lives have become neverending nightmares. Gang violence, parental neglect, drugs, suicide – these are just a few of the social problems Segura tackles in his novel. 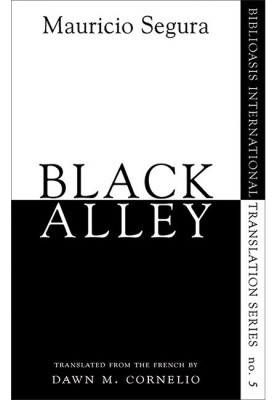 And what do you do when you come up against these things? In Segura’s world, you do “nothing. You take it. That’s all … Asi es la vida.” The book is set in the neighbourhood of Côte-des-Neiges, the home of many different ethnic communities. Segura weaves together two stories that take place in the same streets about five years apart. The first traces the friendship of two boys in Grade 5: Marcelo, whose
parents are from Chile, and Cléo, who arrives from Haiti at the beginning of the book. It is narrated in the second person, as if someone were sitting with Marcelo, reminiscing about their childhood together, and the mystery of the narrator’s identity propels those sections forward.

The second narrative strand tells of the mounting tension between two ethnic gangs of high-school students, one Latino, the other Haitian. These parts of Black Alley could be seen as Montreal’s version of West Side Story. Segura includes all the key points: bumbling or unsympathetic adults, racist exchanges, a scene of violence at a school dance, and a final showdown, complete with switchblades, the police, and a chain-link fence. All that’s missing is the music, the dancing, and ridiculously tight pants.

Segura has tried to make up for what Black Alley lacks in fun with added edginess, and some of his choices have produced wonderful results. Sometimes, his use of the second person creates a kind of immediacy that makes the distance between the reader and Marcelo disappear, as it does in this description of a race: After a moment, you heard nothing but your own breathing, the beating of your heart, your steps, and the droning of the wind.

When you opened your eyes coming out of the curve, you almost stopped, thinking you’d made a false start: no one was on your heels and the deserted, desolate track seemed to take on gigantic proportions.

But it doesn’t always work. The repetition of “remember, Marcelo” is not only irritating because it interrupts the flow of the scene, but it also sounds unnatural, both in the original French and translated versions of the novel. There are also some problems with the translation. Mauricio Segura perfectly captures the Québécois slang used on the street in French, but it often becomes awkward – sometimes even silly – in Dawn M. Cornelio’s hands.

In the end, though, these minor problems don’t really detract from the book’s emotional power. Segura has brilliantly juxtaposed innocence with violence in order to heighten the tragedy of his story, and the result is devastating. The book’s French title is Côte-des-Nègres, and it was well chosen. It is an uncomfortable title for an uncomfortable book. In Black Alley, Mauricio Segura is showing us the world in which many Montrealers live, and it’s important that we take a good, long look. mRb