Black Racialization and Resistance at an Elite University

Academic freedom is under attack. An increasingly diverse student body, more politically correct than ever, is threatening the very fabric of Western academe. Or so it would seem if you pay attention to the ever-growing number of media stories equating inclusion with censorship.

The reality is quite different, and rosalind hampton is well positioned to know just how. Now an assistant professor in the Department of Social Justice Education at the University of Toronto, hampton is a Black Montrealer who spent years at McGill University as a doctoral student and community organizer. In Black Racialization and Resistance at an Elite University, hampton explores how complex – and taxing – it can be, historically and today still, to merely exist as a Black person in one of Canada’s top higher-ed institutions. 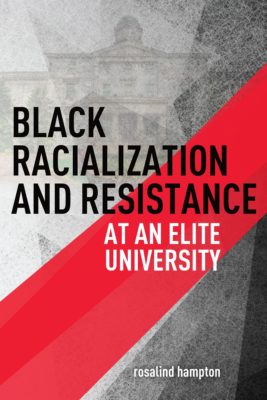 Black Racialization and Resistance at an Elite University
rosalind hampton

The first essay draws from comprehensive archival research into the origins of elite Canadian universities such as McGill. What need did such institutions seek to meet in the British colonial ecosystem to which Canada belonged? Where did the money come from? What class of citizen did a place like McGill aim to produce? hampton walks the reader through the knots of power that shaped McGill, but also Laval University, the University of Toronto, Ryerson, and the University of British Columbia, among others. We see the Transatlantic slave trade, the fur trade, the industrial elites, and imperial pride intertwine in the creation of what most uncritically see as “prestige” in higher learning.

In the fascinating chapter “Trying to Keep Canada White and the Power to Write History,” hampton then documents institutional attempts to control the official narrative of what a place like McGill stands for, as well as the contestation of that story emerging from Black student activism over the years. The book then goes on to paint a much-needed nuanced portrait of the diversity of ideologies, positionalities, identities, and tactics of the Black students and faculty wrestling with the fact of white supremacy at the heart of Montreal.

hampton’s representation of Black “McGillians” reaches unparalleled completion because of the obvious care put into her methodology. The essay draws from dozens of interviews with Black students, faculty, staff, and activists who have experienced McGill directly over the span of five decades, and several of the quoted participants make it obvious that they are allowing themselves to be this honest and transparent in their testimonials only because of the trust they put in the person interviewing them.

hampton also doesn’t shy away from making visible her own perspective as a scholar who engaged in activism during Quebec’s massive student strikes in 2012, for example. Her experience with challenging Québécois and Canadian nationalist narratives and navigating class, gender, and race within and beyond McGill allows her to make sense of her historical sources, and highlight the historical continuities that have shaped Black life in white elite spaces from the nineteenth century to the twenty-first.

The result is an urgently needed, exceptionally well-researched piece of intelligence about the actual limits to academic freedom that shape the life trajectories of aspiring Black scholars, historically and now.

The book will make you trash most of what you think you know about “American-style campus liberal orthodoxy” or the perks of being a part of a historically disadvantaged group in the age of positive discrimination. hampton’s thorough study shows that reverse racism doesn’t exist, and that institutions like McGill still have a long way to go to unpack the anti-Black systemic racism that has been embedded in its core since its foundation.

Who would have thought? mRb