A review of Blind Spot by Laurence Miall

When author and activist June Callwood was asked to provide some words of wisdom for aspiring writers, she responded, “Read, read, read. Forgive your parents.” Blind Spot, by Laurence Miall, is the story of a man who cannot follow the last part of that advice.

Luke is a thirty-something fellow who cannot forgive his parents for their middle-class University professor lives in Edmonton. He runs away to Vancouver to become an actor, but just as his career is (comfortably) going to seed and he’s in danger of settling down with a good woman, his parents die in a car crash. Now Luke can’t forgive his parents for their deaths. When he returns to Edmonton for the funeral, he treats surviving family and friends with stiff reticence. Despite this, Luke doesn’t return immediately to Vancouver and his fiancée, deciding instead to stay and paint the family home in preparation for sale. Then, as he stretches the job to have an affair with a neighbouring PhD student, he discovers that his mother was having an affair with one of her husband’s colleagues. 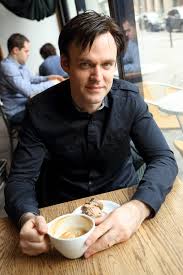 The story sets the table for a great deal of emotional interplay, but Luke is a challenging character to integrate. He doesn’t interact in the tense situations Miall creates; instead, he mines conversations for issues he can use to push his own emotional state into focus. When he’s with his new girlfriend’s academic friends, he’s aloof, then argumentative, then jealous. With his fiancée he’s silent. He appropriates the home he grew up in, but sleeps in the living room because he feels like an intruder upstairs. The man has intimacy issues, which is perhaps what he blames his parents for – but why?

The book’s main tension centres around the investigation of his mother’s affair. Luke is obsessed with Jacob Brookfield, whom he views as her seducer. The two affairs present an interesting opportunity for parallel, but the story doesn’t address the hypocrisy of cooking up a seething cauldron of rage over someone else’s act of infidelity while committing one’s own.

We learn virtually nothing about his mother; in fact, the only time we see and hear Luke’s parents are during vignettes from Luke’s adolescence, but the first-person voice of a teenaged boy trying to get laid is not well suited for conveying the complexities of his parents’ adult lives. The plot is driven by confrontations between Luke and Jacob – we’re supposed to dislike Brookfield because he’s a self-absorbed manipulator, but so is Luke, so during their arguments there’s not much for a reader to root for.

It’s not clear where the titular Blind Spot is. Is this the reference to hypocrisy? Or the notion that one never truly sees – or stops seeing – one’s parents? The book is well paced and a cleanly rendered depiction of a selfish, emotionally stunted man going head to head with the freight train of parental resentment. If his mother’s affair is the submerged leviathan to blame for Luke’s intimacy issues, readers would need to know more about the parents as people to make the connections successfully. This knowledge is also what might help Luke forgive and accept them, but this isn’t a book about forgiveness, or acceptance.